WHY IS LEE KUAN YEW MADE TO SUFFER SO LONG IN HOSPITAL?

A couple of days back, the Prime Minister's Office announced that our founding father Lee Kuan Yew was hospitalized in SGH for severe pneumonia since 5 February.They revealed that he was lightly sedated, on mechanical ventilation and warded in the the Intensive Care Unit (ICU).But in a 2013 interview, Lee Kuan Yew mentioned that he feels weaker by the day and wants a quick death. To accomplish this, Lee Kuan Yew had an Advanced Medical Directive (AMD) done which specifies that if he had to be fed by a tube, and if it is unlikely that he would ever be able to recover and walk about, his doctors are to remove the tube and allow him to make a quick exit.Based on what we know now, he is on mechanical ventilation whereby anendotracheal tube is inserted into the trachea in order to provide air to the lung. This method is only used when the patient's own breathing is inadequate to maintain life.In short, Lee Kuan Yew's condition is severe and not looking good. Given his lightly sedated state and inability to breathe normally, how possible would it be for him to feed himself for basic nourishment? Chances are, he is now unable to feed himself and also relies on a feeding tube. If this is true, it would fulfill part one of Harry's Advanced Medical Directive (of being fed by a tube). The second portion of the Advanced Medical Directive speaks about Lee Kuan Yew being unable to recover and walk about. Look at last year's NDP parade and you can see the state in which Lee Kuan Yew is in. He is frail and unable to walk on his own and basic tasks like standing and sitting down is a problem. 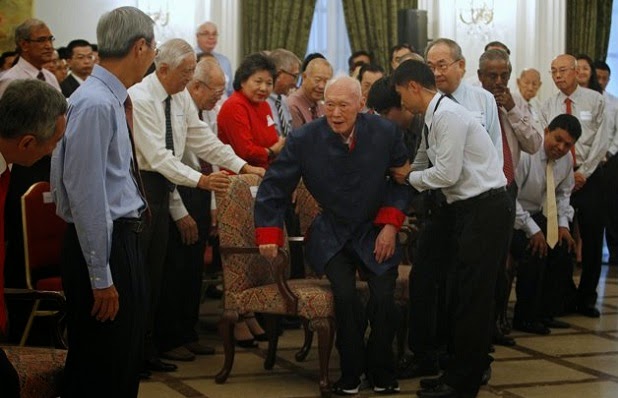 His bodyguards and minders are by his side 24/7 to help him with his mobility. Now that he is bed ridden, what are the chances of him making a full recovery and regaining his ability to walk pre-pneumonia? If this holds true, it would fulfill Lee's Advanced Medical Directive authorizing his doctors to give him a swift exit.Why is the Advanced Medical Directive not taking effect in accordance to the old man's wishes? Are the doctors very optimistic about Lee Kuan Yew's full recovery or are there other hidden reasons behind Ah Gong's current pitiful existence? Your guess is as good as mine.LIKE us on Facebook now!