According to the Guardian, ISIS supporters have issued a threat to Twitter employees over the social network's practice of banning accounts associated with the group.
In an Arabic post uploaded on JustPaste.it, the terrorist group warned Twitter that “your virtual war on us will cause a real war on you” and mentioned co-Founder Jack Dorsey and Twitter staff have "become a target for the soldiers of the Caliphate and supporters scattered among your midst!" 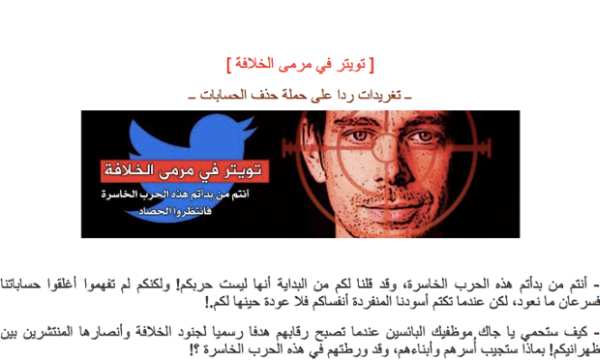 “You started this failed war … We told you from the beginning it’s not your war, but you didn’t get it and kept closing our accounts on Twitter, but we always come back. But when our lions come and take your breath, you will never come back to life.”
Twitter’s terms of service bans “direct, specific threats of violence against others”, and the company has followed YouTube in proactively shutting down Isis-related Twitter accounts.
When the company has identified a user as being associated with Isis, it moves aggressively to keep them off the social network.
Share