I thought long and hard about writing this post today.. My friends know that I’m usualy a very patient person and I don’t hold any grudge or unhappiness for long, but this fucking Pinoy bitch is just too much.

Last weekend the hubby, Baby Dee and I went over to Orchard on our weekly outing. It was lunch time and Dee was feeling hungry, so we decided to stop by the nearest shopping center to find a place to prepare milk for Dee.

The foodcourt at the basement was too crowded at that time, so we decided to take the lift up to Jollibee, where we thought we could find a table. The place was overcrowded with filipinos, but we managed to find seats at one of the round chair sofa tables in the restaurant.

Unfortunately, next to us was a table of four chattering filipino maids who were obviously not there to have lunch and were just occupying the space in the restaurant. They were not very big sized, but the way they dumped their bags all over the seats made it seem like they occupied two entire four-seater tables. They had ordered two cups of drinks, but their tables were clean and it was obvious that they were too cheapo to even buy anything else or at least pretend that they deserved the big two tables that they occupied.

Hubby of course was a gentleman and he asked whether they were occupying the second table. This bitch with heavy set make up and sickening Filipino accent just gave him this fucking glazed look before turning back to her friends and speaking away in their monkey language.

I was quite annoyed, but as Dee was already quite hungry and we just wanted to settle this quickly, hubby and i just set our things down on the empty table beside them and started to take out Dee’s baby stuff. It was then that this annoying Pinoy bitch gave a loud “TCH” sound, as if we had just invaded their space and were disturbing them. Like EXCUSE me bitch, what the HELL?

I was on the verge of giving them a piece of my mind but lucky hubby was there to calm me down. He said something like never mind, they were not doing anything to us and it’s not like we have to bother about them. So I was like whatever, let’s just feed Dee and get out of this dirty rundown place.

But the next thing you know, one of the bitch’s friends starts pointing at Dee and saying some things in that gibberish language of hers, with the rest of those act-highclass maids nodding their hands and giving this frickin xialan looks. I think it must have been something bad because they were all giving frowning looks and nodding away at what this other bitch said, maybe they were saying that we shouldn’t be feeding the baby in this place or something.

At this point I gave them my fiercest glare and told them “what are you looking at!? do you know its rude to point?”

This seems to frighten them a bit, maybe they’re not used to Singaporeans being harsh to them in public. They might think that most Singaporeans are soft and pushovers. Not me, I was going to give them a piece of my mind for talking smack about Dee. But hubby was like, “Bee, no need to fight over this. We’re Singaporeans, we’re better than these people.”

Maybe it was the way he said it out loud for these four monkey bitches to hear, and because Dee was around, I decided not to lose my temper. Some friends say that motherhood has made me mellow down, I think I agree.

To cut the long story short, we fed Dee and were out of the place without buying anything. i was too angry to bother trying to be nice and buy something from Jollibee. We left without any incident, and the Pinoy bitches left us alone for the rest of the time probably because of my outburst. I think having a manly, big sized husband also helps in this kind of situation. 🙂

The moral of the story: I think I’m starting to agree with most Singaporeans that our country is becoming a little too crowded out by foreigners who think they own everything here in Singapore. I used to be quite anything about the government importing foreigners because really, there are so many positions that Singaporeans don’t want to do, like cleaning, nursing… But this is too much. Having to endure rude gestures and behaviour from a person who’s come here to Singaporeans’ money, MY money, is just too sickening. Filipinos may think that they own Lucky Plaza, but they don’t. They may think that Jollibee is their place, but that building sits on Singapore land, f**king bitches. The next time some foreigner tries to take advantage of me or Dee or hubby, I’m gonna give them a real dressing down that they can take back home to the Philippines.

Editor: This post was shared and posted with permission. 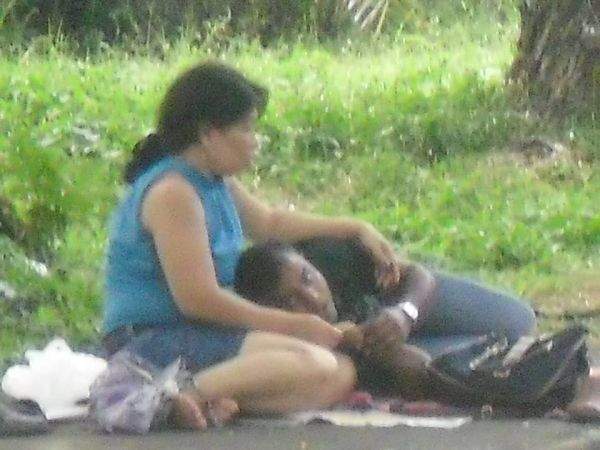