To experience Singapore’s natural and urban flavours, take a boat out to one of the country’s southern islands, walk in a nature reserve or chill out at one of the many little cafes located along Joo Chiat and East Coast.

Southern Islands
Singapore is an island nation – but it is also a nation of islands, with more than 40 individual pulaus (islands) forming the archipelago. There are two ways of exploring the Southern Islands: the luxurious way is to rent a private yacht from either Marina at Keppel Bay or ONE°15 Marina Club, which will take you to some of the more remote places. The more affordable option is to take the daily ferry from Marina South Pier. It takes you to St John’s Island, which used to be a quarantine centre but is now a tranquil place for campers; Lazarus Island, where you’ll find a secluded cove nicknamed the Blue Lagoon that links it to Pulau Seringat; and Kusu Island, whose temples come alive during Chinese festivals, and is also the location of a tortoise sanctuary.
• Yacht hire at Keppel Bay from $900 for 12 people, marinakeppelbay.com
• Singapore Island Cruises from Marina South Pier start at $18 for a round trip, islandcruise.com.sg

Sungei Buloh wetland reserve and Bollywood Veggies
The district of Kranji is like Singapore’s rural hinterland and one of the best places to check out the wildlife is at Sungei Buloh. You’ll find herons, monitor lizards, snakes and otters; and migratory birds from China or Siberia if you go between September and March. If you’re hungry, head to Bollywood Veggies, which is run by a rather expressive lady called Ivy Singh. It does some great dishes such as nasi lemak (rice cooked with coconut milk and pandan leaves), eggplant salad, and curries. After lunch, you can wander around the farmland and see local produce including jackfruits and bananas – it offers guided tours sometimes, too. Other farms in the area include Hay Dairies, Singapore’s only goat farm, Firefly, an organic food farm, and the Jurong frog farm, which breeds bullfrogs for consumption in a traditional Chinese dish called tianji. A daily shuttle links all these places to Kranji MRT station.
• Sungei Buloh wetland reserve, open Mon-Sat 7.30am-7pm, Sun 7am-7pm. Bollywood Veggies, open Wed-Fri 9.30am-6.30pm, Sat-Sun 8am-6.30pm

Sungei Tengah
There are three main places to go to in the Sungei Tengah area. First, the local charity Animal Concerns Research and Education Society’s wildlife sanctuary – you can visit the animals that have been rescued, such as tortoises, turtles and an iguana. Then there’s Farmart Centre, another good place for animal lovers: visitors get to pet and feed rabbits and goats. At Qian Hu Fish Farm ornamental fish are bred and aquarium accessories manufactured. Qian Hu runs a free shuttle bus service to and from Choa Chu Kang bus interchange, and you can walk between these places as long as you don’t mind working those leg muscles.
• Farmart Centre, open Sun-Thu 10am-10pm, Fri-Sat 10am-12am. ACRES Wildlife Rescue Centre, open Mon-Sun 9.30am-5pm. Qian Hu Fish Farm, open Mon-Thu 9am-6pm, Fri-Sun 9am-7pm

Jalan Bahar’s dragon kilns
Jalan Bahar is home to Guan Huat and Thow Kwang, Singapore’s last two dragon kilns – gigantic dragons-shaped chambers used to glaze ceramics. This type of kiln was invented by the Chinese thousands of years ago, and immigrants built the ones in Singapore in the mid-20th century. Both of them are now protected by the government and only fired up three or four times a year, on special occasions. You can visit them anytime though, and the potters there will be happy to show you how things work. Alternatively, browse through the products, or book a workshop if you want to try your hand at pottery.
• Jalan Bahar Clay Studios, open Mon-Sat 8am-5pm
• Thow Kwang Pottery Studio, Facebook page, open Mon-Sun 9am-5pm

Bukit Brown Cemetery
There are many cemeteries worth visiting in Singapore and for some reason it’s become quite a hip thing to do lately. One of the most significant is Bukit Brown, which is currently a hot topic as the government wants to build a highway through it. Quite a few of the graves have already been exhumed prior to construction work, but it’s one of the largest traditional Chinese burial sites in south-east Asia. One of the most impressive graves, that of Ong Sam Leong, a local business tycoon, is almost the size of two basketball courts. Volunteers from the SOS Bukit Brown group regularly hold events there to educate the public about the history behind it and motifs found around the graves – check its Facebook page for updates.
• Lorong Halwa, bukitbrown.org. Open daily, 24 hours

Green Corridor
Following the old Keretapi Tanah Melayu railway tracks, the Green Corridor goes from Woodlands, in the north of Singapore, all the way to the beautiful but off-limits Tanjong Pagar railway station in the south. The trains used to take passengers from Singapore to the Malay peninsula but the tracks have been removed after operations ceased in July 2011, and it’s now a green artery that goes through the heart of the island. To walk the whole track will take the best part of a day, but there are many entry and exit points along the way if you want to nip out for a bite. Look out for two old cast-iron bridges near Bukit Timah Road, and have fun spotting other renmants such as signal posts and level crossings.
• thegreencorridor.org. Open daily 24 hours

Southern Ridges
The Southern Ridges is a 9km walking trail that links three main parks: Kent Ridge park, Telok Blangah Hill park and Mount Faber park. Starting with Kent Ridge park, make sure you go to the car park at the top of the hill, where you can get spectacular views of Singapore, and where a second world war tank is still on display. The war memorial museum, Reflections at Bukit Chandu, is also there and built to commemorate Lieutenant Adnan, one of the last soldiers to defend the area from the Japanese. Telok Blangah Hill park is home to the grand Alkaff Mansion, which is now an Italian restaurant and also a popular place for wedding shoots. Pass through the gorgeous pedestrian bridge, Henderson Waves, before reaching Mount Faber, from where you can take a cable car to Sentosa, home to Universal Studios and other attractions.
• West Coast park, nparks.gov.sg. Open daily 24 hours

Kampong Lorong Buangkok
A bit of a living museum, Lorong Buangkok is home to the last kampong – a traditional village – on mainland Singapore. It’s in Hougang in the north-east of the country and is a remnant of what Singapore used to be like. It feels like you’ve stepped through a time machine when you arrive. A few residents still live here, and you’ll see things such as unfinished roads, cats and dogs wandering around, wooden houses built in the traditional Malay style, orchards, and other old-world elements. If you just walk around, it will take about an hour but if you fancy chatting with the locals and taking photos, you could spend at least half a day there.
• Gerald Drive. Open daily 24 hours

Joo Chiat and East Coast
Once the quarter for Peranakans – a group of Chinese who immigrated to Indonesia, Malaysia and Singapore – the Joo Chiat and East Coast areas are rich with heritage. A good route would be to go down East Coast eastwards from Tanjong Katong (which is also worth exploring) all the way to Siglap, but Joo Chiat Road makes for a great detour – as it’s home to local eateries and shops. Places to check out include the Ceylonese Tamil Temple on Ceylon Road, Katong Antique House along East Coast Road and Kuan Im Tng Temple at Tembeling Road. East Coast Road is home to traditional coffee shops such as Chin Mee Chin Confectionery, Ampang Yong Tau Foo and Kim Choo Kueh, and while the main Joo Chiat and East Coast Roads are quite touristy, the side lanes have a lot of lovely shops and townhouses, and their former glory remains largely untouched.

Changi Village and Pulau Ubin
Close to Changi airport, Changi Village used to be the site of the British Royal Air Force Base, remnants of which can still be found there today. There are excellent food places at the Changi Village Hawker Centre, including a bunch of popular nasi lemak stalls. The Malay coffeeshop at Block 1 also has excellent desserts such as goreng pisang (fried banana) and epok epok (curry puff). From here, you can take a ferry to Pulau Ubin, the largest offshore island of Singapore. It’s the last kampong outside of Kampong Lorong Buangkok and can get crowded on weekends and during festive periods. You can find cheap, decent seafood here. There are also wetlands and wild rocky shores at a cape called Chek Jawa. And if it’s tucked-away sand that you’re after, find your way to Maman Beach or Noordin Beach, which sit further away from the usual tourist areas.
• Bum boats leave from Changi Point Ferry Terminal from dawn till dusk, £1.50 per person each way

S’PORE 2ND MOST VISITED CITY IN ASIA, BUT ARE TOURISTS COMING TO SINGAPORE TO FIND JOBS? 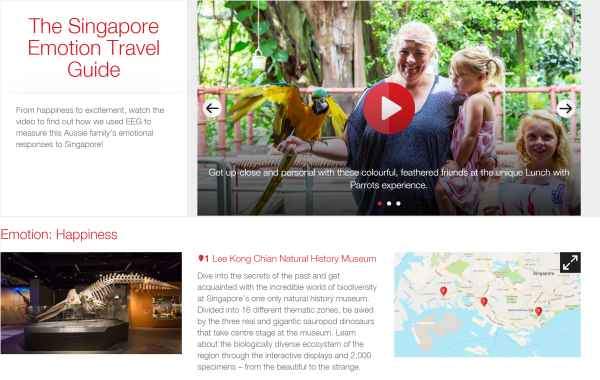 STB MAKES TRAVEL MAP BASED ON ANGMOH FAMILY’S EMOTIONS WHILE STAYING IN SG… WAIT WHAT!?