THAIPUSAM: WHY ARE MUSICAL INSTRUMENTS BANNED IN THE FIRST PLACE?

Yesterday during the Thaipusam procession, there were a few incidents and it caused an unhappiness.

Singaporeans are asking why aren't devotees allowed to play musical instruments to help kavadi carriers complete their journey. There are many sayings out there claiming this and that, causing many Singaporeans to be unhappy.

Being someone who join in the celebrations for the past twenty over years, I thought I share my experience about this and give some explanation. Maybe these explanations may no longer sound reasonable to the younger generation now but at least let me share why the rules are the way they are now.

From the start, it is not only the Hindu Endownment Board that made these rules. These rules were make together with the Perumal and Tank Road temples. It was a joint decesion between the HEB and temple representatives and not something they implement because they like to do it but only after serious considering. None of the parties want to make their own religion look bad and make their own procession boring right?

Why then did they make these rules?

1) Simple, because before the rules were in place, it was a free for all, anybody could do anything they wanted. And what happened in the past was, people would start dancing to the beat of bongo drums and the urumi. When they started dancing, they blocked the roads and prevented the kavadi carriers from leaving on time and delayed them from fulfilling their vows. A 3 hour walk can easily become 4 or 5 hours.

2) Some people used the opportunity to dance to the rythm with some very vulgar dance moves in public which tarnished the sanctity of this holy occasion. This is something that the religious members do not wish to see. Thaipusam is not a normal music or secular festival but a religious festival so respect should still be given and followers need to adhere to proper "decorum" when attending the festival. It is like how Christians are expected to dress in their Sunday best when going to Church. It is the same concept. This is not about having fun, this is about our devotion to Lord Murugan.

3) Because of these delays due to dancers blocking the roads, the roads in the city end up being congested for an indefinite amount of time. This is also why they ban the instruments so that dancers will not cause unnecessary blocking of the public roads. So now music instruments are only allowed within the temple grounds but not when out in the public roads.

But now we see so many road closure for marathons and what, so maybe authorities can consider closing these roads just for this one day too? this maybe is something for you to consider. Orchard road also can close for some funny tennis event so maybe this can change?

4) Last one is because during past Thaipusam festivals, there are many groups playing loud music as a signal of presence and sure have one or two groups start to taunt other groups, trying to outdo one another and end up announcing their gang presence and end up in trouble. that's why you see heavy police presence yesterday especially those police from secret society branch, they watching out for these potential trouble makers.

Are we Hindus being discriminated against?

Yesterday I see many Hindus very upset, say they are being discriminate in Singapore over this incident.

If you observe the Chinese funeral, they can only walk for like one two hundred metres, after that they need to board buses or other vehicles to continue the funeral procession. Traditionally Chinese funeral need to walk all the way to the funeral place. Now only Thaipusam allow devotees to walk 4KM from temple to temple. Whether this is discriminate against Hindus, you judge for yourself lah.

I hope I share somethings which you previously dont know and thank you very much for reading.

Racist Neighbour Put Fan in Front of People’s House to Disturb Them When They Pray! 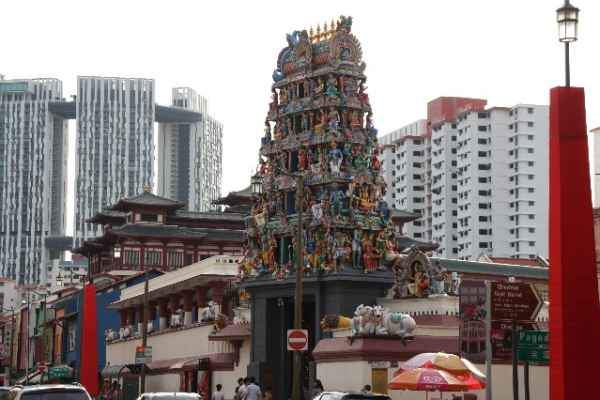