Child Killer Tortured And Raped By 20 Men In Brazil Prison
A child killer was raped and tortured in prison after reportedly beating, raping, and killing his one-year, eight-month-old stepson.
Multiple reports are starting to make the rounds on child killer Daryell Dickson Meneses Xavier, a Gracie Barra competitor and jiujitsu instructor, who turned himself in to Brazilian authorities after having killed his stepson and obtained a lawyer.
Globo had the original report, translated here by Google Translate:
"The child was hospitalized on September 27 in Anchieta Hospital, Wansbeck, and died two days later. Doctors had been informed that the victim had been dropped. Servers from the facility, however, triggered after police find that the injuries were not consistent with a fall."
“The action was blunt trauma to the force applied was very large. Only a person with great poise and knowledge of techniques, as the stepfather, who was jiu-jitsu, to know, “said the delegate from the 38th Precinct Tania Soares. “The child also had a fissure in the anus, it is unclear whether from sexual abuse, since constipation also gives fissure.”
After turning himself in, Xavier entered the prison population where he was targeted by as many as 20 inmates. O Presente had the rest:
"Daryell was raped by about 20 prisoners. He had injuries all over the body, the most serious ones in the anal region. Dissatisfied, and still furious about the crime committed by the professor, the prisoners tore apart the stitches that he received and raped him again. The blood stains on the rear of the short of the young man are proof of how much he suffered." 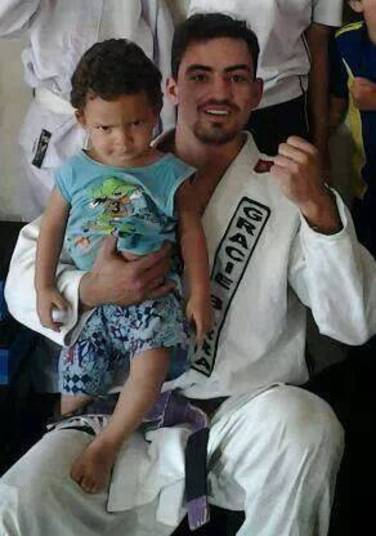