In a shocking Facebook posting this morning, former PAP Member of Parliament Maidin Packer defended the shooters in the deadly attack on Charlie Hebdo.
He posted a video of the attack on Charlie Hebdo and remarked that there are inconsistencies between the official narrative and the leaked footage.
He asserted that French authorities should not assume that the shooters are guilty simply because they are dead. 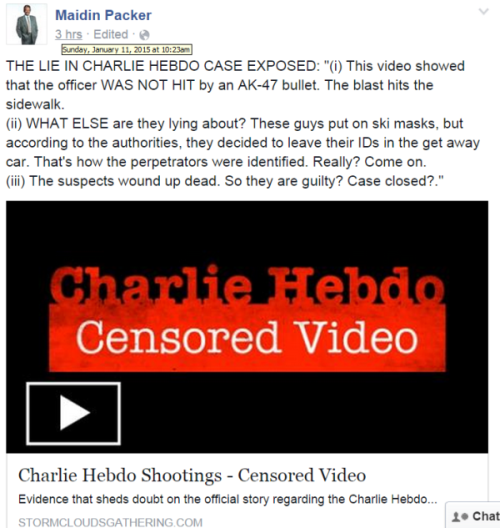 The terror attack on Charlie Hebdo newspaper which happened on 7 Jan in Paris has left 12 dead, including its editor  Stéphane Charbonnier. The shooters have been identified to be Saïd Kouachi and Chérif Kouachi, both two Franco-Algerian Muslims. Charlie Hebdo newspaper has been the target of Islam extremists for its satirical cartoons of Prophet Muhammed and ISIS leaders. Depictions of Prophet Muhammed is forbidden in Islam.
Maidin Packer is a former Member of Parliament of the ruling party for Aljunied GRC (1991-1996) and Marine Parade GRC (1997-2006). He has also held various political appointments during his time as MP — Political Secretary for Communications and Informations (1988); Parliamentary Secretary for Education (Jan 1997-Apr 2001);  Parliamentary Secretary (Sep 1991-Jan 1997) for Information and the Arts;  Senior Parliamentary Secretary for Education (May-Nov 2001), Home Affairs (Nov 2001-2006) and the Environment (2003-2004). Before he entered politics, he was editor for Malay newspaper Berita Harian.
Share

The Real Bad Guy Is Not Raeesah Khan or Workers Party – It’s Our 154th Media!