CRAZIEST McDONALD’S MENU AROUND THE WORLD 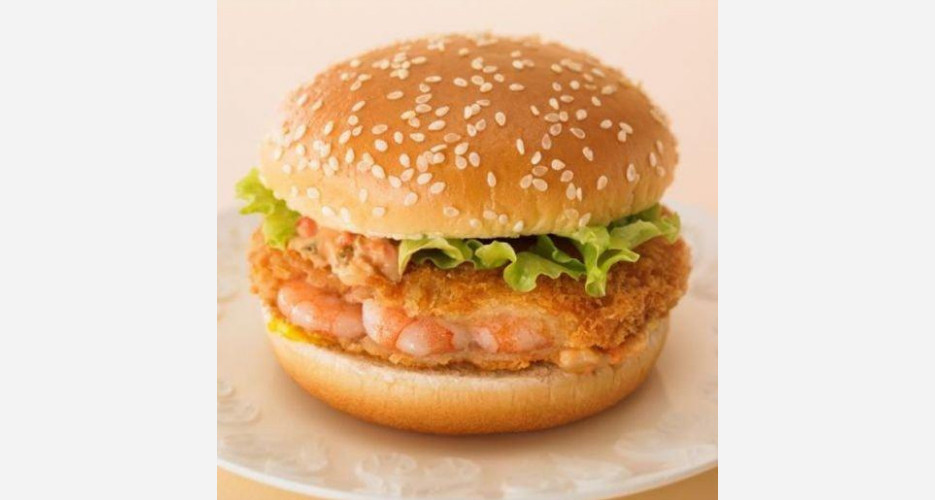 What it is: A patty of Panko-battered shrimp, topped with Ebi shrimp tempura sauce and lettuce

Who says a burger has to be made of beef? Who says it can’t just be a patty of battered, whole, whiteleg shrimp? McDonald’s Japan dares to dream. The Ebi Filet-O Shrimp got its name from Japanese model Yuri Ebihara, who helped promote the release of the burger. The panko-crusted shrimp patty is complemented by shrimp tempura sauce, mustard, and lettuce. This sure is a popular burger choice for McDonald’s Japan customers. 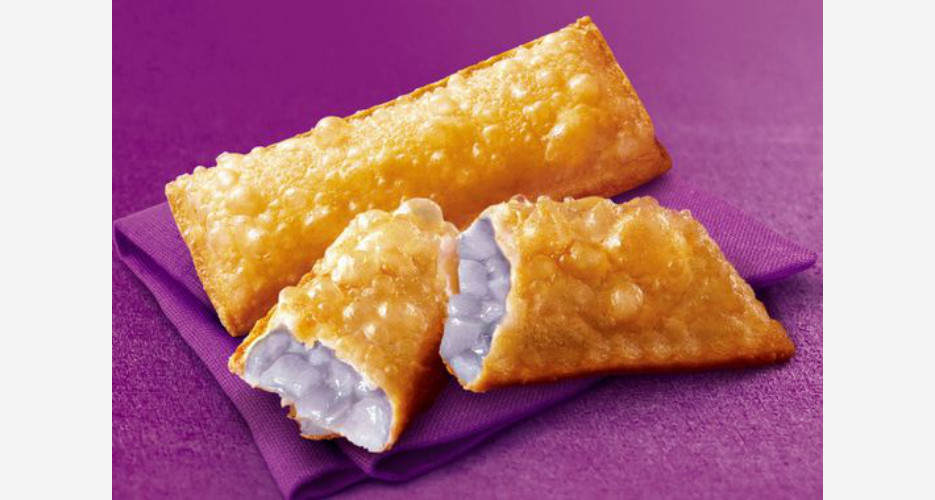 What it is: Like a McDonald’s Apple Pie, but with taro-root filling

Like its American cousin, the McDonald’s China taro pie doesn’t resemble a pie in the least—but what would a McDonald’s menu be without these crunchy, rectangular, fruit-filled pastries? The taro pie has the same crispy shell as the classic McDonald’s apple pie, but it’s stuffed with bright purple taro root. The taro is like the sweet potato’s alter ego, and worth trying if not only for its crazy color. 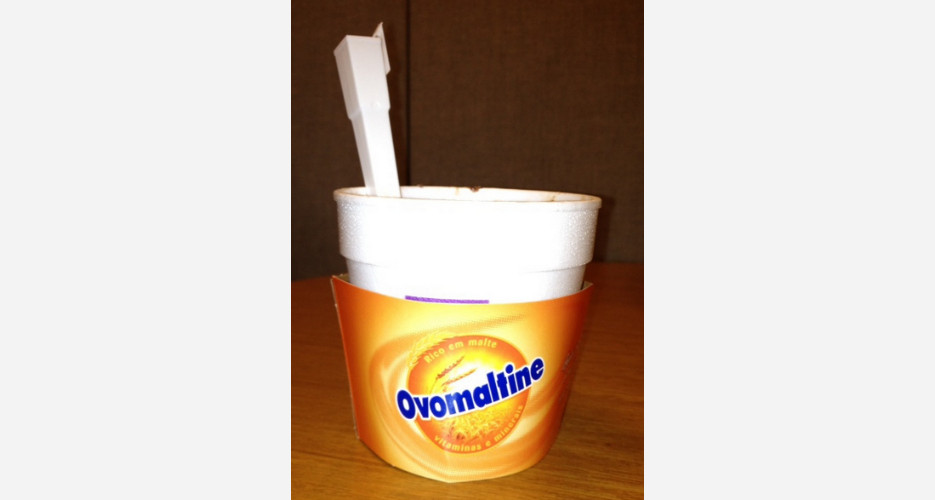 What it is: The blended ice cream dessert you know and love, made with chocolate Ovomaltine powder

Does Ovomaltine (a.k.a. Ovaltine) still count as a healthy version of chocolate milk if it’s in a McFlurry? Combine a couple of heaping scoops of the powder with soft serve, chocolate sauce, and some chocolate chips, and you’ve got a full-blown chocolate explosion of a McFlurry. You can get your hands on an Ovomaltine McFlurry in some European McDonald’s as well. 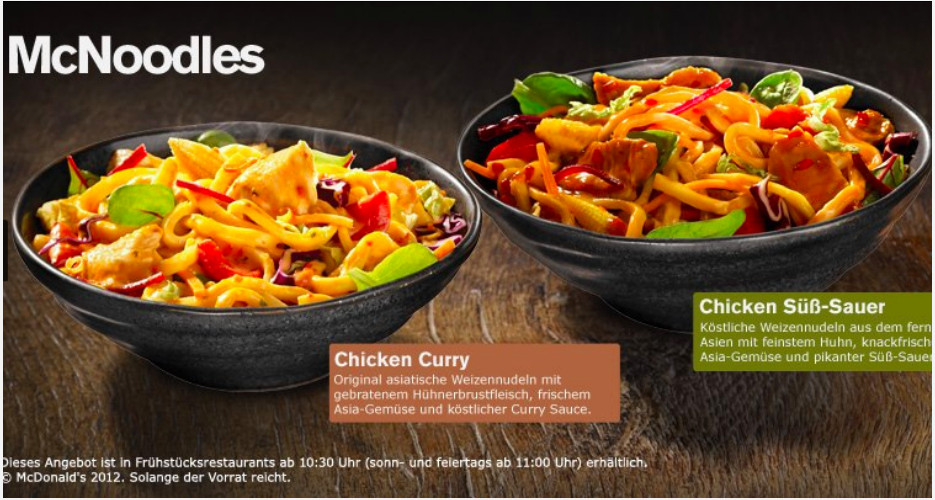 What it is: A stir-fry bowl with noodles and vegetables

McDonald’s capitalizes on a menu of classic items, but it isn't afraid to jump on some food trends, too. In Austria last year, McDonald’s launched the limited-time-only McNoodles. Austrians were big into stir-fried noodles for a while, so McDonald’s seized the opportunity to create this own version of an increasingly popular dish. The dish was only available for a test run of a few months, so you’ll have to hit up another Austrian fast-food joint to get your noodle fix. 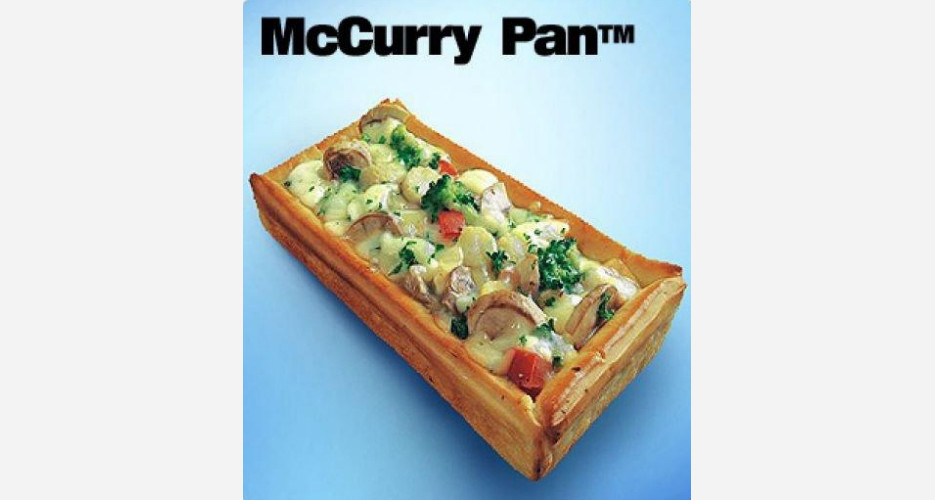 What it is: Curried vegetables baked in a cream sauce inside a crispy "pan" constructed from bread

This isn’t just any pan of curried vegetables baked in a creamy sauce. No, this is curry with an bread-bowl-style twist: You can eat the pan it comes in. This item is on the vegetarian menu of McDonald’s India locations, because if you can’t eat meat, at least you can eat the bowl your food came in. The vegetarian McDonald’s were first installed at locations of religious pilgrimages in India—after a long, tiring spiritual journey, why not refuel with some meat-free fast food? 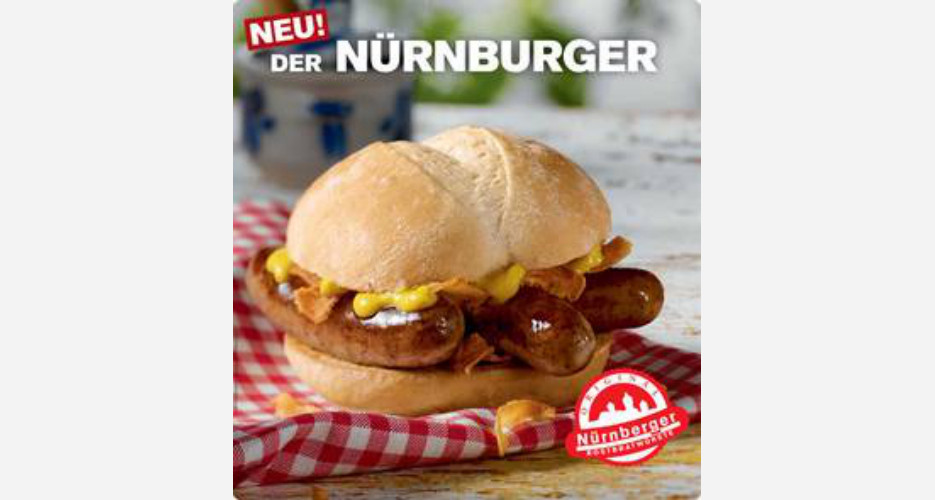 What it is: Three Bratwurst served on a bun with mustard and onions

Of course, McDonald’s Germany doesn’t mess around when it comes to sausages. And we say: If you can fit three brats on a bun, do it. With the Nürnburger, you get just that, plus a generous smothering of mustard and onions. The name and concept of the burger comes from Uli Hoeneß, a former German soccer star and current owner of a sausage factory. The McNürnburger’s name plays on that of regionally popular Nürnberger sausages. Unfortunately, the amazing pun only carried sales of the sandwich through a brief three-month run. 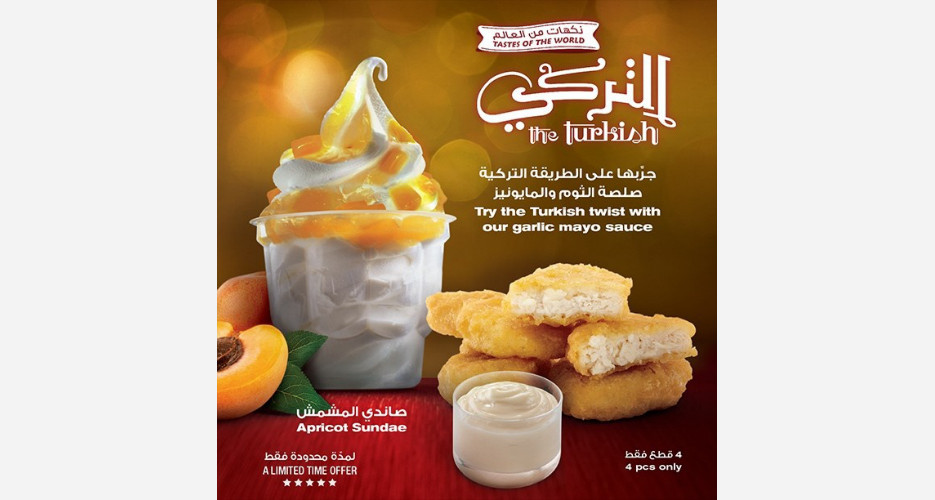 What it is: Soft serve ice cream with apricot topping

As McDonald’s Arabia advertised on its Facebook, “You probably tried dipping Chicken McNuggets in garlic mayo sauce already, but have you tried our new Apricot Sundae yet?” Not sure if we’re totally sold on the apricot-ice cream-chicken combo, but a fruity sundae we can get behind. The apricot sundae was available as a seasonal summer treat, but hopefully McDonald’s isn’t taking away Turkey’s garlic mayo anytime soon. 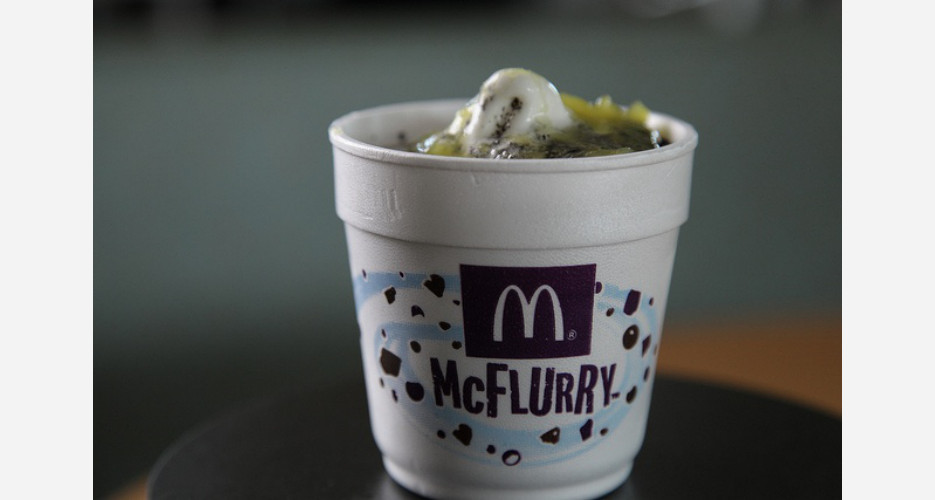 What it is: Soft serve ice cream blended with oreo and pineapple filling

If you think McDonald’s isn’t an innovator of flavor combos, think again. They’re putting the crowd-pleasing taste of Oreos to the test with this McFlurry, pairing the ever-popular cookie with pineapple. The combo of crunchy cookie and pulpy pineapple may sound a little strange, but it’s actually a big hit in Latin America. 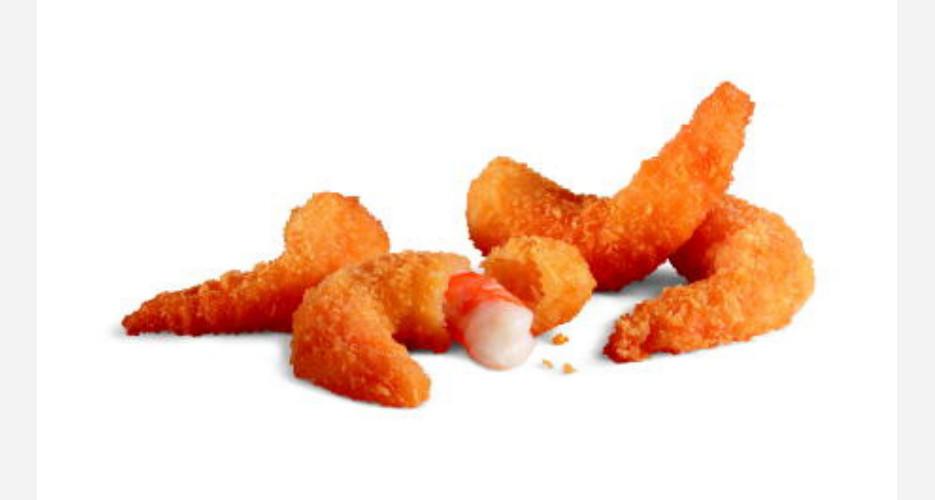 What it is: A side dish option of breaded shrimp

Do you want shrimp with that? At McDonald’s Russia, you can order fried shrimp as a side. The chain offers these breaded shrimp pieces as an alternative to a side of fries, because the simple addition of “Mc” makes any food into a plausible Mickey D’s offering. This side dish sounds tasty enough, despite mixed reviews on Twitter. 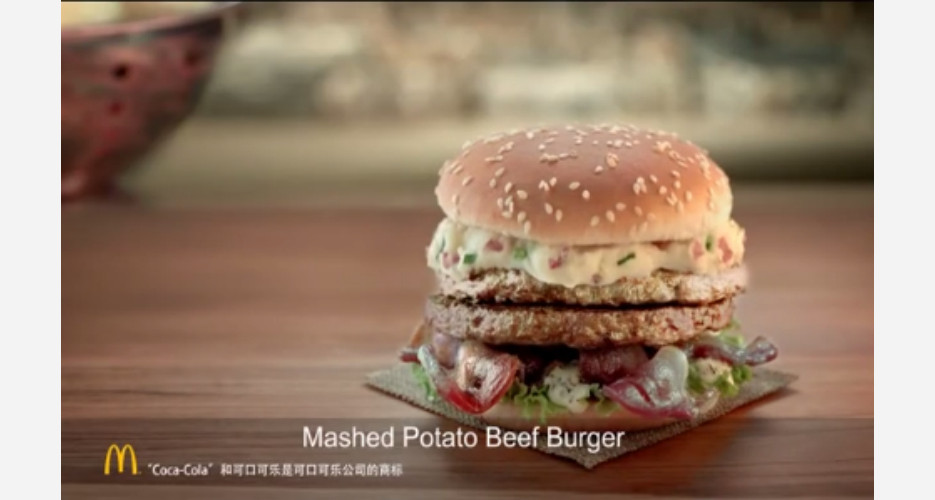 What it is: A beef patty topped with bacon and mashed potatoes

How do you take your burger to the next level of manliness? According to McDonald’s China, you top it with a big ol' heap of potatoes. Thus, the Mashed Potato Burger was born. The burger is part of McDonald’s “Beef 2012 Manly Campaign in China.” The campaign demonstrates that bacon and mashed potatoes are critical steps on a person's journey to manhood, but possibly at the expense of a soggy bun. 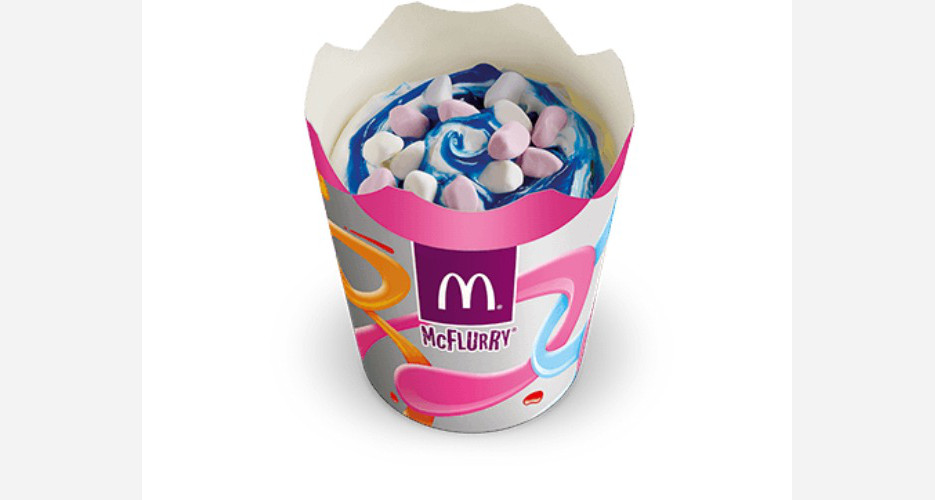 What it is: Soft serve ice cream blended with marshmallows and bubblegum-flavored syrup

Don’t panic—no gourds were hurt in the making of this McFlurry. Squash means marshmallows in this case—marshmallows that get topped with bubblegum syrup to make the Bubblegum Squash McFlurry. This cloying, frighteningly blue McFlurry option is for those of you into Fear Factor-style dining. 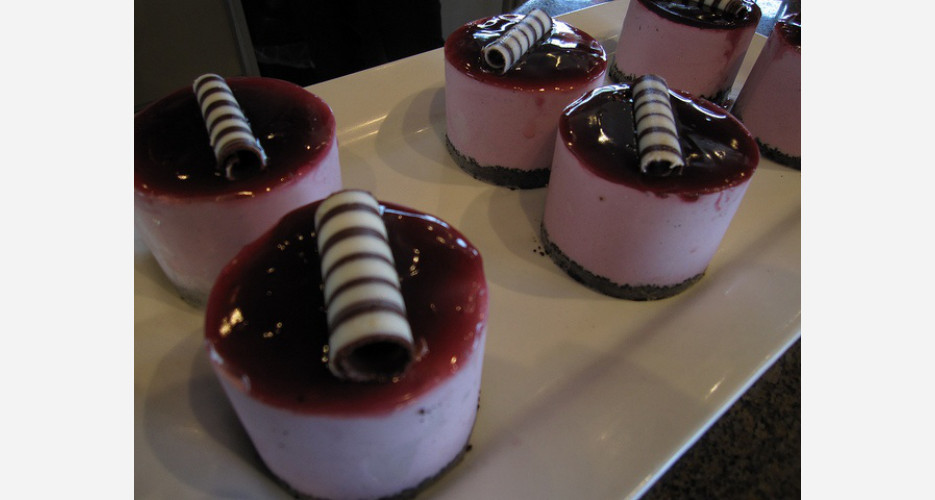 What it is: A decadent dessert made with blue corn

Oh, McDonald’s, you’re full of surprises. For one, this dessert looks like it belongs behind a quaint pastry shop window, not a fast food refrigerator. Plus, it gets its wild color not from dyes, but from blue corn. It uses the same blue corn that’s part of an antioxidant-rich beverage in Latin America. Tempted? 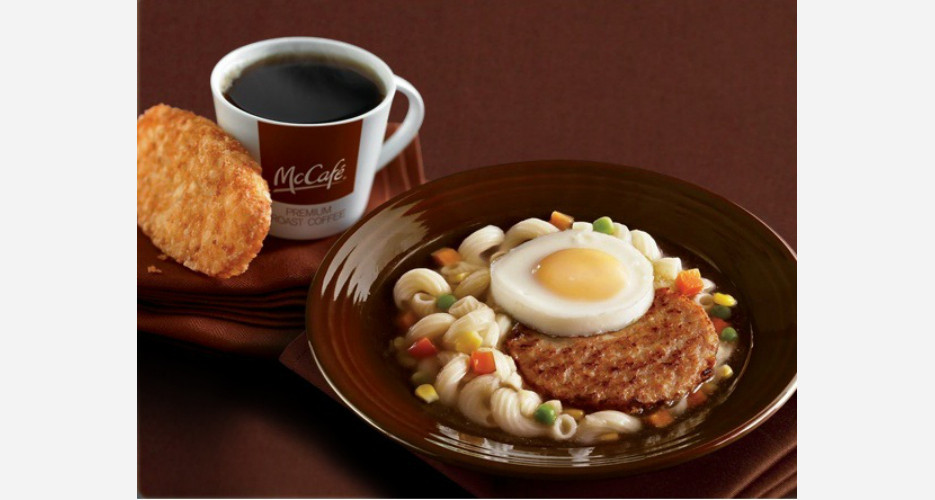 What it is: A soup with noodles and vegetables, topped with a sausage patty and hardboiled egg

From the looks of this meal, it seems like McDonald’s Hong Kong is serious about breakfast. This hearty breakfast dish is essentially a soup full of twisty noodles, plus a sausage patty and an egg. So if you’re in Hong Kong and into having a leisurely breakfast inside a McDonald’s, this sausage-egg-and-noodle conglomerate is for you. 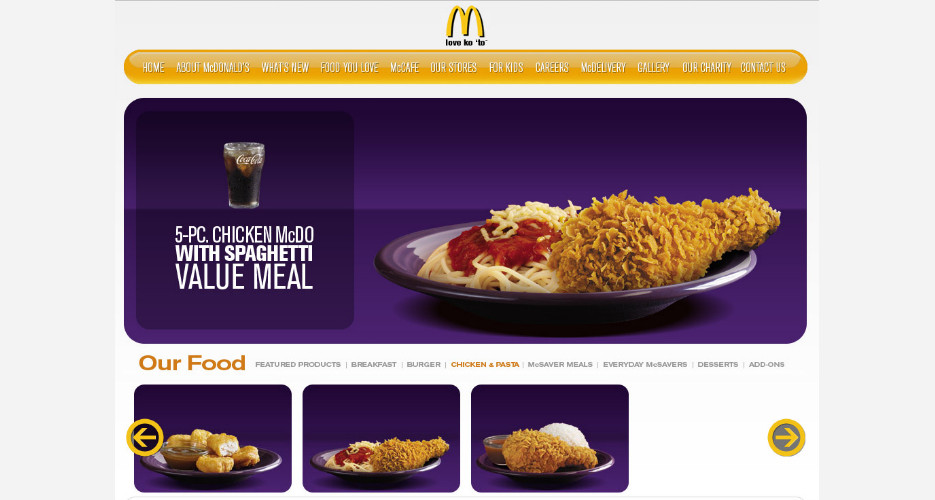 What it is: A value meal with fried chicken and spaghetti with red sauce

Sometimes hitting up a McDonald’s is all about feeding a craving, and McDonald’s Philippines gets that. What if you just really need some fried chicken, but pasta sounds good, too? Enter: the Spaghetti Value Meal. The Spaghetti Value meal imagines a world in which you can eat the tasty classics you want, at the same time, whenever you want. McDonald’s tried to make that world happen in America, too; but alas, we just weren’t ready for it. 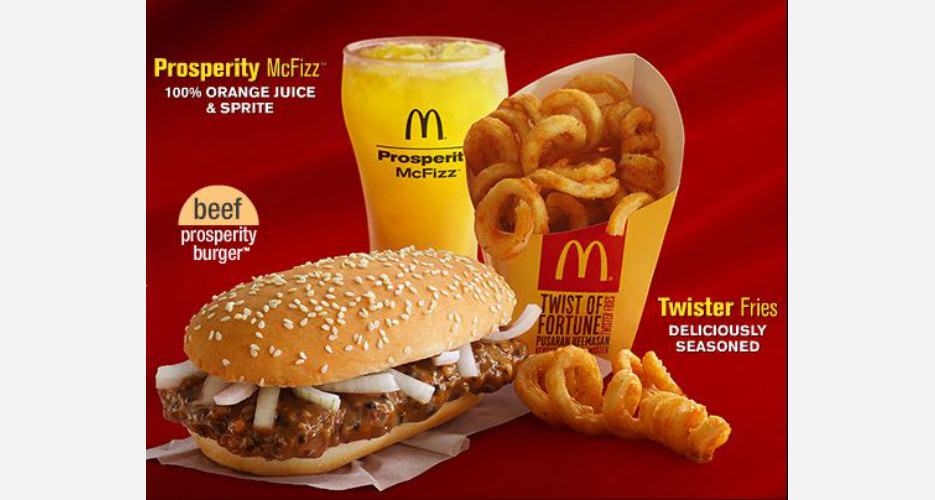 What it is: A burger that mysteriously resembles a McRib, with spicy pepper sauce and onions

Here we have a beef patty with black pepper sauce and onions on a bun—oh, and also a big serving of prosperity? Bravo, McDonald’s marketing team, for demonstrating that you can name a burger without using “Mc” and instead use literally any noun you please. Hopefully, McDonald’s Malaysia will get follow-ups like the Glorious Riches Burger or maybe even the Propaganda Burger.