VIETNAMESE TOURIST REFUSE TO ACCEPT ANY MORE HELP FROM S’POREANS

By 9am on Thursday, almost US$10,000 (S$12,938) has been raised for a Vietnamese tourist who came here on a holiday and left feeling cheated by a mobile shop in Sim Lim Square.

A campaign was started on crowd-sourcing site Indiegogo on Nov 4 to raise funds for factory worker Pham Van Thoai, 28, who went to Mobile Air to buy an iPhone 6 for his girlfriend. The story of how he knelt, cried, and begged staff for a refund went viral, prompting Singaporean Gabriel Kang to start the project. Mr Pham lost $550 to the shop, and left without a phone.

While offers of help have been growing by the minute, Mr Pham was quoted in Lianhe Zaobao on Nov 6 saying that he has accepted $550 from a businessman, and bought a phone with it. He said he will not be accepting any more help.

“I lost $550. So I will accept only $550 donated by kind people. Nothing more. I’m grateful for all your kindness but I do not want to take more than what I’ve lost,” Mr Pham told Lianhe Zaobao.

Mr Pham was here on holiday with his girlfriend on Nov 3, and had saved up to buy the iPhone 6 her, while earning just about $200. After paying $950 for the phone, he was asked to top up $1,500 for warranty. When he asked for a refund, he was offered $600, which his girlfriend refused. Staff even laughed as he begged them. Eventually, the police and the Consumers Association of Singapore were called in, and he received a refund of $400.

Mr Kang, who works at a local tech startup had aimed to raise at least $1,000 and slightly more if possible, to buy Mr Pham an iPhone, and other Singaporean snacks like bak kwa and kaya, and ship them to him, as he has returned to Vietnam.

Mr Kang said on Facebook on Wednesday night: “Right now the plan is to fly them both back for an all expenses paid dream holiday (which was robbed from them in the first place) and present them with the iphone 6. Thanks for all your support to make this possible!”

CHINA SELLS IPHONE X IMITATION FOR LESS THAN $200, ANYONE BUYING? 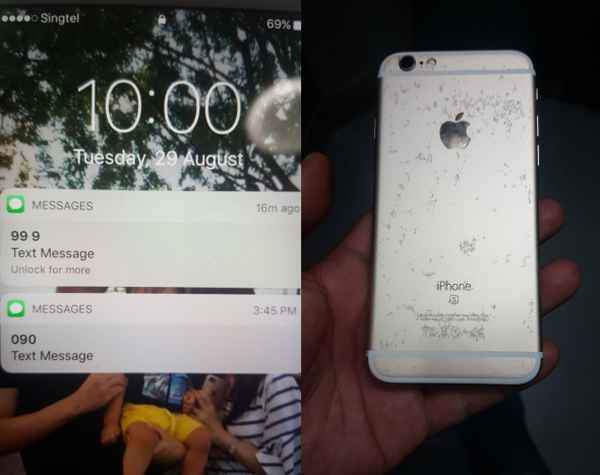