Lecherous men have been spotted in Chinatown’s People’s Park Complex, seeking “strategic” spots near a staircase to peep under women’s skirts.

Shop attendants in the neighbourhood said that four to five men have, in recent months, become Peeping Tom “regulars” at the mall, Lianhe Wanbao reported yesterday. Some men would loiter in the area all day.

A Wanbao reader, Ms Xu, said she was near Lim Chee Guan barbecue pork store on the first floor of People’s Park Complex on Saturday afternoon when she saw a middle-aged man standing nearby, tilting his head back occasionally to look upstairs.

Sensing that something was amiss, she later went to the same spot the man was at, and looked up. She was surprised to learn that by doing so, she could see what was under the skirts of women using a nearby flight of stairs.

She approached sales assistants at surrounding shops about the matter and learnt that the spot the man stood at is frequented by Peeping Toms. Women who wore short skirts and used those stairs had been unaware that they were being leered at.

Ms Zhang, a barbecue pork sales assistant, said: “On weekends, an uncle would loiter near the store, at about 10am, to peep under women’s skirts. He would sometimes touch his lower body. It was really disgusting.”

She added that some of the store’s staff members have reported the Peeping Tom to the security guards at the mall.

While Wanbao did not spot the man yesterday, reporters did see several others loitering in the area and sneaking peaks upwards.

The security guards at the mall confirmed that many retailers had given feedback about the Peeping Toms but said that as the area was near a bus-stop, it was difficult to chase anyone away, as they could simply be waiting for buses.

One guard said: “Because of these incidents, we’ve stepped up our patrols. But unless someone is able to snap a photo of the men in the act, it would be difficult to report the matter to the police without evidence.” 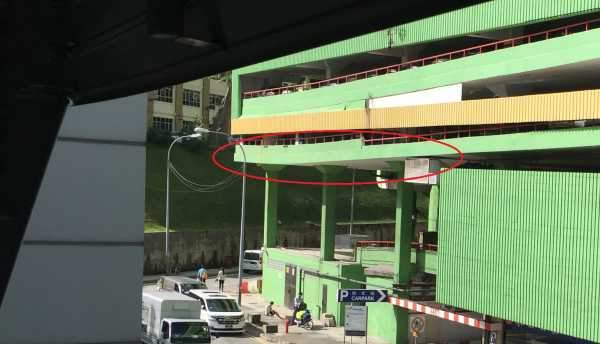 FLOOR LOOKS WARPED AT PEOPLES PARK COMPLEX, IS IT DANGEROUS?