Dear editors,
From London with Love: Tan Jee Say won't be getting a reply from PAP
Two perhaps questionable moves by Tan Jee Say in his early efforts to gather public support for his next run for office — one is to rely on the widely circulated but maybe questionable research findings of a relatively new professor (Thum Ping Tjin).  The other is to parrot what this fresh researcher wrote and said without due diligence of his own, like cross-checking with other historians and sources.
Having recently retired and now splitting my free time between Singapore and London, researching into the social history of Singapore, let me cite just 4 reasons why both Tan and Thum might not get a reply the government:
In a May 1960 ISC meeting, Lord Selkirk:
“…expressed his appreciation of the skilful way in which the Singapore Government were trying to deal with the problem of subversion in the trade unions, but said that it was obviously necessary to keep a careful watch on any pressure building up to subvert the TUC [Trade Union Congress].”  ISC (60) Revised Minutes of 9th Meeting, 19 May 1960 (para 4)  (See  JPEG Selkirk1)
Later, during another ISC meeting in October 1960, Selkirk commented that the Singapore Government:
“…was faced here by a challenge against the democratic system over the whole of Malaya. To a large extent this challenge was now being made through the trade unions in Singapore. The Government could not allow itself to be knocked about by the Communists acting through the trade unions. The strength of the Government's case was that these people were pressing the Communist cause by subversive methods. By sticking to its line, the Government would emerge stronger in the end. It should not, therefore, be deterred by fears of any temporary unpopularity.”  ISC (60) Revised Minutes of 14th Meeting, 7 Oct 1960 (para 8) (See JPEG Selkirk2)

“I enclose copies of reports which came to us last month from a reliable and well placed source on two meetings held at the headquarters of the Barisan Sosialis last September.  These reports are of considerable importance, not only for what they reveal of the future intentions of Barisan Sosialis, but they provide more conclusive evidence than we have had hitherto for the belief that Barisan Sosialis are Communist controlled…It has never been disputed that the Communists in Singapore are following United Front tactics and that Barisan Sosialis is their principal instrument on the political front…The report on the first of the two meetings shows that those engaging in the discussion were Communists examining quite frankly how best to achieve their ends.  Furthermore, we can see that the Communist influence within Barisan Sosialis is not confined to the Central Executive Committee but extends to Branch Committee level…”. CO 1030/1160, Moore to Wallace, 7 Dec 1962 (paras 1 and 2) (See JPEG Selkirk3)

A week later, on 14 December 1962, after the Brunei rebellion, Lord Selkirk sent a dispatch to Duncan Sandys, the Secretary of State for the Colonies:

“I said I had recognised all along that a threat was presented by the communists in Singapore.  I had not however previously been convinced that a large number of arrests was necessary to counter this threat.  Recently, however, new evidence had been produced about the extent of the communist control of the Barisan Sosialis and also there had been indications that the communists might resort to violence if the opportunity occurred.  Recent statements by the Barisan Sosialis and Party Rakyat supporting the revolt in Brunei confirmed this.  Accordingly H.M.G. [Her Majesty’s Government] were prepared to see [arrest] action taken in Singapore…”. CO 1030/1160, Selkirk to SSC, Tel. 582, 14 Dec 1962 (para 5) (See JPEG Selkirk4)

Bottomline for all interested readers is this — we should read new interpretations of history with a curious mind and not take everything at face value. As a Singaporean who has been a long time working resident of London, I will say that the British public is also somewhat skeptical of the British archives because one might never know if ALL documents were declassified or if officials writing the reports have other motivations. Nevertheless, Singaporeans should never forget our own history because if we do, then Singapore would really become just a place for people to make money! 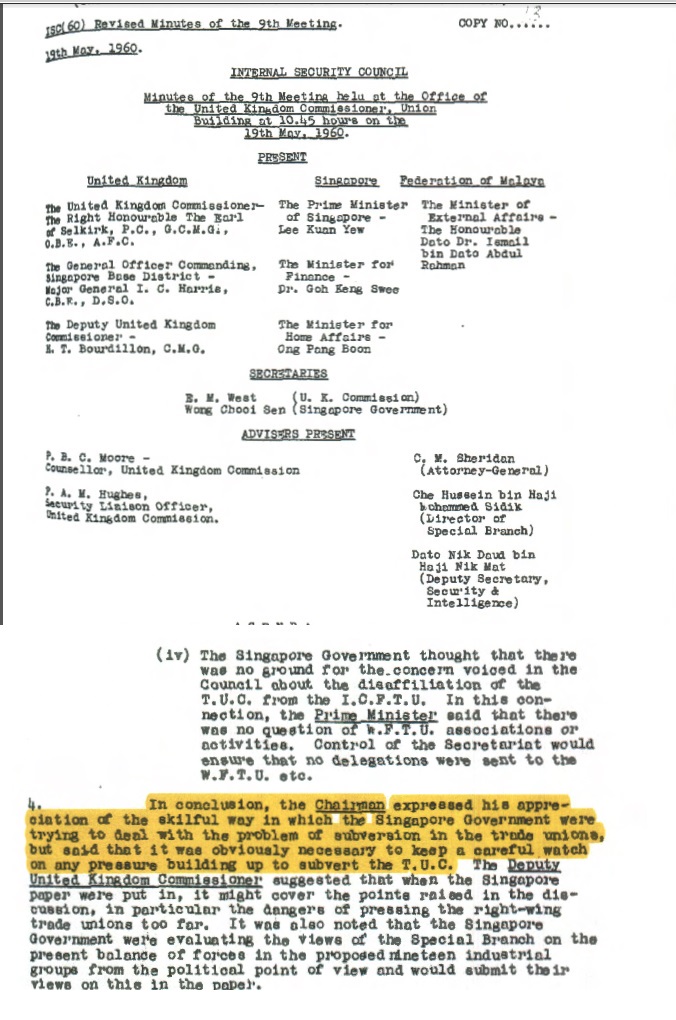 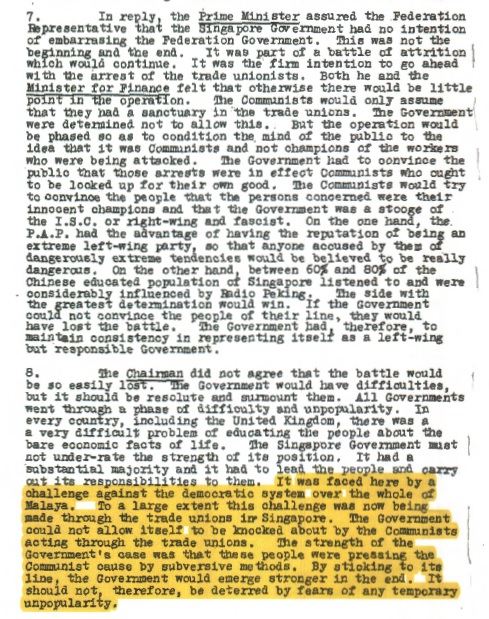 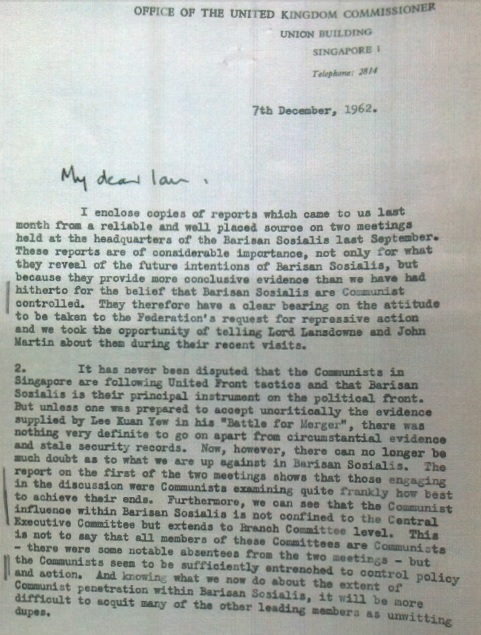 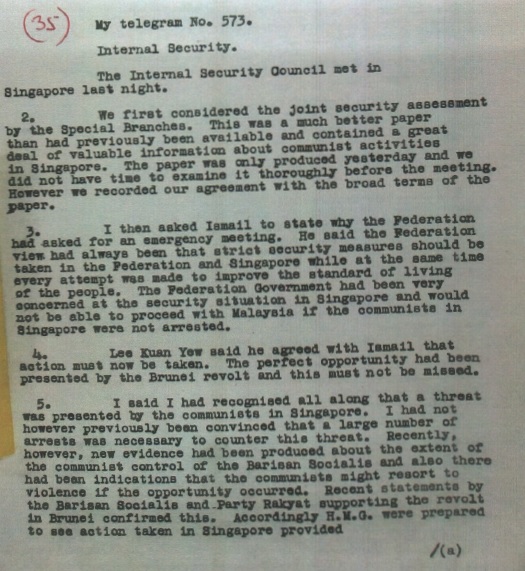