The SAF has introduced the SAF Volunteer Corps (SAFVC) for new citizens, permanent residents to contribute their time and sweat to Singapore’s national defence, regardless of their gender.

On first glance it look like the government is eager to build up national cohesiveness thanks to the liberal open door policy that led to the divide between Singaporeans and new Singaporeans with the latter taking advantage of the benefits of PR for several years before taking up citizenship.

But the setup of SAFVC is going to undo what the government has been trying to do. The government has always viewed conscription as a privilege to defend the nation, in contrary to what most Singaporeans think.

The SAFVC is effectively extending this privilege to new citizens. The Straits Times gave an overview of SAFVC on 12 October 2014 and I’m sure it shocked many that VC recruits are only required to undergo 4 weeks of training. But it is presumably that SAFVC is going to allow new citizens with the necessary experience to boost the support capabilities of SAF hence the 4 weeks of training is to simply induct the new citizens.

The ST report has given a good overview of the vocations that are available for SAFVC for now. 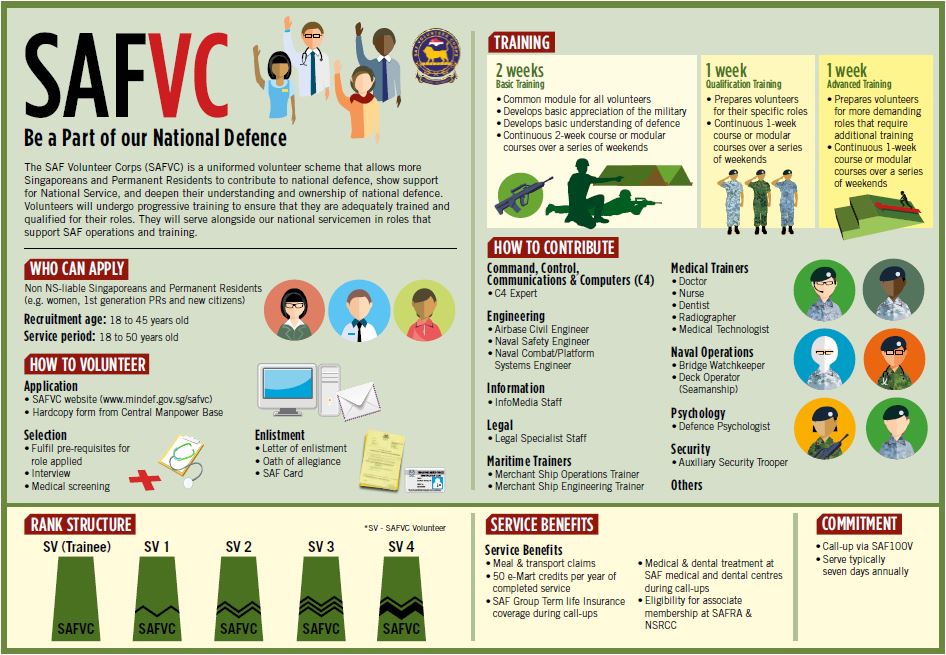 The choice of vocations available for SAFVC is contentious. It is an unspoken rule that Singaporeans of a certain race & faith are barred from certain sensitive vocations (because they put their religious belief above the state). But SAFVC has opened up C4 Expertise vocation and Naval Combat Engineering vocation for new citizens. So a former PRC national who has been a new Singapore citizen for the year is more trustworthy than a born-and-bred Singaporean who has lived here all his life?

What about the rank hierarchy? Will Singaporean regular soldiers or conscripts be pleased if they know a SAFVC soldier who has been through only 4 weeks of training has the authority to mete punishments? What is the highest appointment a SAFVC soldier can be appointed to? What is their rank equivalent to regular ranks?

Has the SAF created a problem to solve a problem?