Last Saturday (27/09/2014), Han Hui Hui and Roy Ngerng continued their series of protest against the PAP governance of the CPF system, a social safeguard which has received some praises worldwide.

I think the main grouses with CPF system are the lack of control over ones’ hard earn monies and the increasing minimum sum that left some elder Singaporeans disillusioned. Seasoned financial professional and TOC veteran editor Leong Sze Hian has tried to dissect and critic the CPF system but he has hit a black box.  His protege Roy Ngerng tried but became a martyr after a blog post he wrote that criticized the CPF system crossed the line and alluded that Prime Minister Lee Hsien Loong was corrupted.

Han Hui Hui and Roy Ngerng then began a series of Hong Lim Park rallies to gather support for Roy’s legal defense against Lee Hsien Loong and increase awareness of the alleged opaque CPF system. Together with other protest movements that are held regularly at Hong Lim Park, #ReturnOurCPF protests have become ordinary and it has lost its novelty. It is not surprising that interests have waned.

Just when you thought that the protest on 27/9 is going to be another ear-piercing shouting match, Han and Roy have shocked Singaporeans by hijacking a YMCA charity event meant for the disadvantaged and special needs children at an adjacent lawn . Several short video clips have surfaced which showed the protest organisers’ incivility but these clips may have portrayed an inaccurate picture of what had happened on that day.

The bombshell landed when a 17 minute video surfaced which showed Roy and Han have marched towards the YMCA stage three times and disrupted the performance on stage with their unruly behaviour. PAP junior Minister Teo Ser Luck who was the VIP for the YMCA event has become the target of Roy & Han when they screamed into the loudhailers demanding him to “Return Our CPF”. Some of the supporters of Roy & Han have even gotten physically close to Teo and displayed signs of aggression. 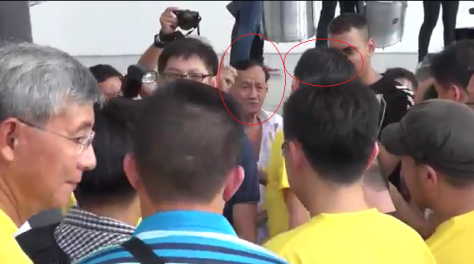 Were these supporters a physical threat to Teo? If they were, did Teo’s bodyguard fail in their duties by allowing these aggressive protesters to congregate near Teo? Isn’t the role of the bodyguards is to ensure the safety of the junior Minister? What are the security implications?

Had the VIP been a heavyweight minister such as Ng Eng Hen, or K Shanmugam, these aggressive protesters might have been pinned down, arrested and the situation would have turned chaotic.

Here is the full 17 minutes video: