Who is an exile? What is an exile? Is an exile someone who cannot return to his/her country because he/she will face injustice? Is an exile someone who doesn't want to return because he/she does not want to answer charges levied against him/her? Is an exile someone who has completely no trust in the system and no faith that Singaporeans will stand up for him/her, if the cause is just? Is an exile someone who feels that freedom in a foreign land is better than being jailed at home?
Then why do some stay and fight in Singapore even though they face many instances of unfairness and injustices? People like JBJ, Chiam See Tong and even Chee Soon Juan. They stayed and they fought the good fight. They brought democracy to our lands and they lend us a voice when we were deaf.
**********
Let us look at the the circumstances of these three individuals featured in recently banned film To Singapore With Love. [And YES, Government was being dumb when they banned the film because it will only create more publicity. Perhaps they banned it out of their own stubbornness (and stupidity) to honour the fight against the Communists, but they have clearly miscalculated the political climate and the power of the internet.]
HO JUAN THAI
HO made what were considered "Chinese Chauvinistic" speeches as a candidate for Bt Panjang during the 1976 General Elections. He was accused of working up racial tensions by accusing the PAP of "wiping out", "destruction" and "killing" Chinese language at the expense of promoting English language.
When Ho was wanted by the Police for questioning regarding his inflammatory speeches, he decided to abscond to Malaysia and later London with the help ofTan Chay Wa. TCW was a Communist cadre who was later sentenced to death in Malaysia for possession of firearm. Tan Wah Piow, another exile featured in the film, also campaigned for Tan Chay Wa to be spared the gallows.
Ho also publicly declared that he forged his passportto enter UK in July 1977 when his passport supposedly expired in Dec 1976.
Ho had repeatedly claim that the Singapore authorities would not issue him a passport and that he would be detained unfairly if he returned to Singapore. The authorities repeatedly assert that they cannot give Ho a passport because he is being investigated for passport forgery but they will grant him one time pass to enter Singapore. They claim that he is wanted for questioning because of the inflammatory speeches that he made during the 1976 General Elections.
Going by past cases faced by JBJ, Tang Liang Hong and Chee Soon Juan, Ho was most likely wanted for sedition or libel, and running away on a forged passport obviously didn't solve the problem. Clearly, Ho should answer some of these questions raised. If allowed to come back without any conditions, then any criminal who had escaped Singapore would be asking for the same thing. 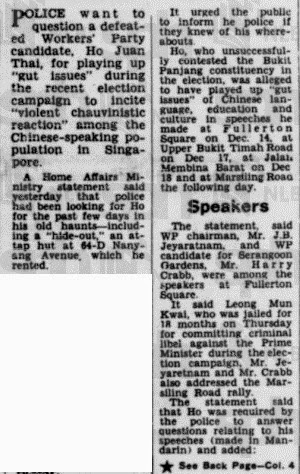 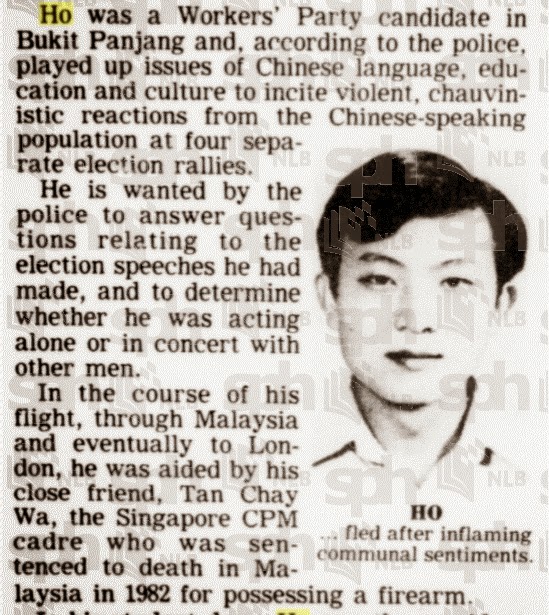 TAN WAH PIOW
This blog has written several posts about this leading leftist leader. You can read them here, here, here,here and here.

Briefly, TWP first hit the headlines in 1975 when he was jailed for a year for rioting at the Pioneer Industries Employee Union. TWP claimed that he was not present at the scene, but the state called upon various witnesses who thought otherwise. After serving his jail term, TWP was due to be enlisted for NS, but he decided to escape to Malaysia illegally and then to London subsequently. His reason for not serving? TWP said that he feared for his personal safety and he could be assassinated should he enlist. Then the natural question would be – wasn't being imprisoned just as dangerous?

One did not join the Communist club like they do the Tanah Merah Country Club today. Communists in the 60s and 70s did not carry a card to say that they were members. The state has always argued that TWP was a communist and he's being wanted by the ISD for questioning. I guess they can only prove this by communications intercepts and by association. The same could apply for persons detained under ISA today for violent political Islam. 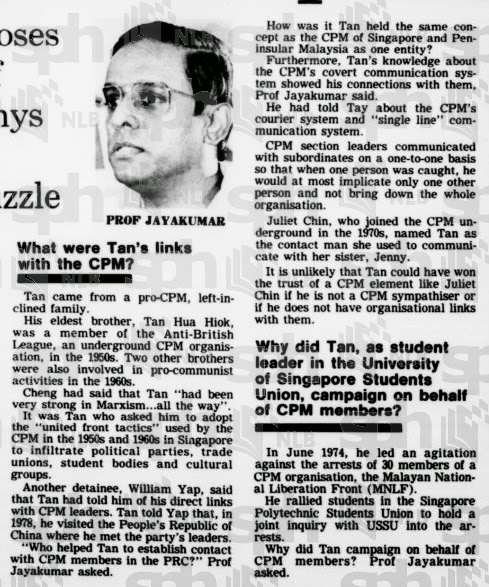 Associations were what TWP had. After serving his jail term, TWP was said to have skipped town with the help of communist operatives. 3 of those who helped him eventually joined the Communist Party of Malaya. TWP hid in Malaysia for a month before forging his exit permit, moving to Thailand, Amsterdam and finally settled in London. In London, he was aided by Malcolm Caldwell, another well-known British communist who died in Cambodia under the Khmer Rouge.
In June 1974, when 30 members of the Malaysian National Liberation Front, a CPM proxy, were arrested, TWP led the protests asking for their release. In 1982, when CPM cadre Tan Chay Wa was being sent to the gallows, TWP campaigned for his case in London. In fact, many of TWP's close comrades, such as Juliet Chin and Chia Yong Tai, during the 70s eventually joined the violent armed communist struggle.
When the communist threat was over and defeat was apparent, five of TWP's communist colleagues, who were also his comrades during his days as student activist, managed to gain asylum in Europe with his help.
Now, if you were Tan Wah Piow, having escaped NS and helped a whole bunch of communists, would you return to Singapore? 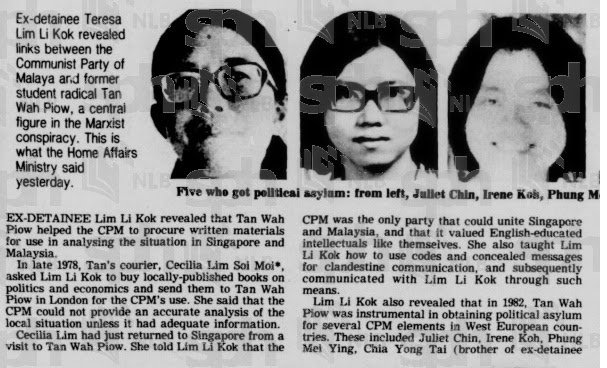 ANG SWEE CHAI
This is actually the saddest case of the three presented here because Ang Swee Chai was never wanted by the authorities for any outstanding charges and she left the country legally to join her husband, Francis Khoo, in London. She was interrogated for 72 hours by the ISD, where she claim she was mistreated, and released without charges. That is to say, she choose not to return home and stayed with her husband who escaped Singapore while he was being investigated for being part of the Euro-Communists in early 1970s.
What makes this case even more poignant is that Ho Kwon Ping, who was investigated together with Francis Khoo, served a relatively short stint under the ISA, and went on to be the Chairman of Banyan Tree and the President of SMU. 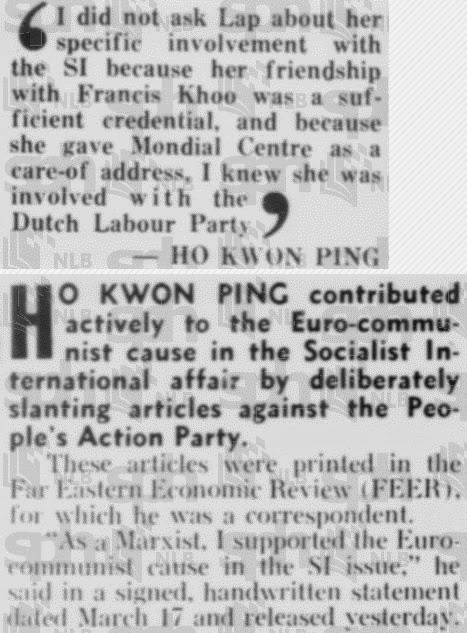 In fact, ASC did return to Singapore in 2011, to lay her husband's ashes to rest. When ASC returned, she was not harassed by the authorities but neither did she stay. She even spoke at the National University of Singapore Health Auditorium. So it's really interesting to see her yearn for home in the film, To Singapore With Love, yet knowing that she could easily make Singapore her home again in 2011. Or maybe it was simply more attractive to frame a dutiful wife as a political exile?
So these are some of the men of and women featured in the documentary film, To Singapore WIth Love. Are they exiled by choice or because they were choice-less? The jury is out. Will the real exiles please stand up.
Note: All screen grabs are from NLB archives of old ST.
Share