[Update: International Community School has released a statement at 12 September 2014 1:01 PM:
ICS has been informed that an individual has made a statement on social media that is negative and hurtful. These comments in no way represent the ideas, beliefs, or values of International Community School. We as a school do not condone the statement or the attitude it reflects. – The Administration Team ]
[Update : Bailey De Villiers has posted a public apology on 12 September 2014 4:32 PM – "Yesterday I posted hurtful comments online. I would like to sincerely apologize to everyone for what I wrote. I responded before thinking and didn't realize the repercussions of my words. Looking back at the situation, I can see that I acted in anger. What I wrote does not reflect what I really think nor the values I've been taught. I am very sorry to everyone who was affected directly or indirectly. My actions were unacceptable and I would give anything to take it back. I am deeply sorry." ]
Dear All Singapore Stuff,
on 11 Sep 2014, Bailey De Villiers (a common French and Afrikaans surname), a foreign student from International Community School (ICS) insulted the local Singaporean community by calling us "low class dogs" and likens us to "horrible creatures" as a result of "a special amount of imbreading" [sic].
De Villiers' vileness and hatred towards Singaporeans, is the same disdain that the Afrikaners had against the local black inhabitants in South Africa during apartheid (1948 to 1991). This clearly contradicts ICS's values of "Demonstrating cultural sensitivity, Developing a Godly self-image, Living productively". Is this resentment rampant in ICS and other international schools such as SAS, UWCSEA, ISS, AISS, etc?
Having the opportunity to be living, studying and working in Singapore is a privilege that an increasing number of arrogant foreigners (PRs, work permit/study permit holders) are taking for
granted and are mocking the locals and government with contempt. The local Singapore authorities, and school boards must ensure that such indoctrination is stamped to prevent Singapore's own 'apartheid', where the Afrikaner minority rule (White South African) curtailed the rights, associations, and movements of the majority local inhabitants for over 40 years.
Nelson M.
A Disgusted Singaporean
Note: Singaporeans may raise your concerns at https://www.facebook.com/International.Community.School.Singapore
International Community School (Singapore)
27A Jubilee Road, Singapore 128575
Tel: +65 6776 7435
Fax: +65 6776 7436
Email: [email protected]
"God the English from these low class dogs is appalling. It really takes a special amount of imbreading to produce such horrible creatures. I completely agree with you Lily. This country's population doesn't know anything but what the media teaches it, it's a sad, spineless place and would be no less than happy to tell them so in their fucking faces. Glad to see some people share the resentment I do with this god forsaken uneducated population." – Bailey De Villiers (11 Sep 2014) 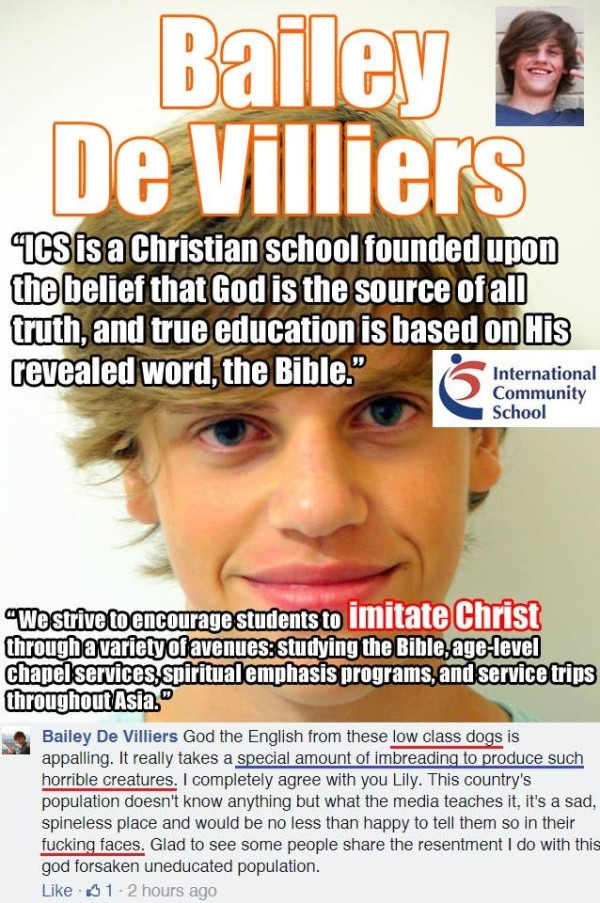