Mother who entered Singapore illegally to look for son given 10 weeks' jail
Her two accomplices – Adam Christopher Whittington and Todd Allan Wilson – were on Monday (Sep 8) sentenced to 16 weeks' and 10 weeks' jail, respectively.
SINGAPORE: The mother who pleaded guilty to entering Singapore illegally via a chartered vessel from Malaysia was on Monday (Sep 8) sentenced to 10 weeks' jail.
The 30-year-old woman – whose name and nationality cannot be revealed to protect the identity of the boy – entered the country to take back her two-year-old son, of whom she had custody over as ruled by the English Court in January.
However, she entered the country illegally via a vessel from Langkawi because her husband had previously made police reports against her and she was afraid of being arrested on arrival. She pleaded guilty to illegal entry into Singapore last Thursday.
The woman told District Judge Liew Thiam Leng that she and her husband had agreed to let the latter's parents to take care of the boy for two months before sending him to the United Kingdom. But the boy remained in Singapore after the two months, despite the English Court's custody ruling.
The mother travelled to Singapore with two foreigners – Briton Adam Christopher Whittington, who runs the non-governmental organisation Child Abduction Recovery International, and Australian Todd Allan Wilson, who drove the vessel.
Whittington was sentenced to 16 weeks' jail, while Wilson was sentenced to 10 weeks' jail. The court gave the former a higher jail sentence for his active role in hatching the plan to recover the child, and for hurting the boy's grandparents.
Whittington had admitted earlier to "arm-locking" the boy's grandfather and hurting the neck of the boy's grandmother in a scuffle at their home.
TAKING THE LAW INTO THEIR HANDS
DJ Liew said he considered the pleas of the three, and concluded that they had taken the law into their own hands. The plan to take the boy from Singapore was premeditated and well planned, he stated.
The woman had contracted Child Abduction Recovery International in June this year. Whittington then contacted Wilson, and met him five days before the plan to take the boy was carried out.
Deputy Public Prosecutor Ailene Chou said Whittington had entered Singapore to conduct reconnaissance, such as the layout of the grandparents' residence and their daily routine. He also researched the vessel route from Langkawi to Singapore, and found out that Raffles Marina Club had an armed guard only during the club's operating hours between 9am and 5pm. He also prepared supplies for the vessel, including a passport and diapers for the boy.
Whittington pleaded for a lighter sentence, saying his grandmother who brought him up passed away last Wednesday and he hoped to return home to pay his last respects. Wilson also apologised, and wanted to be home to take care of his two children.
The woman, too, apologised in court, saying she felt guilty for her actions.
"However, I want to see my son. I am exhausted. Every night, I can't sleep as I keep thinking of my son," she said. "If my son can speak, I'm sure he will say, 'Mummy, come pick me up'."
The jail sentences of the three will be backdated to Aug 21, when they were remanded. 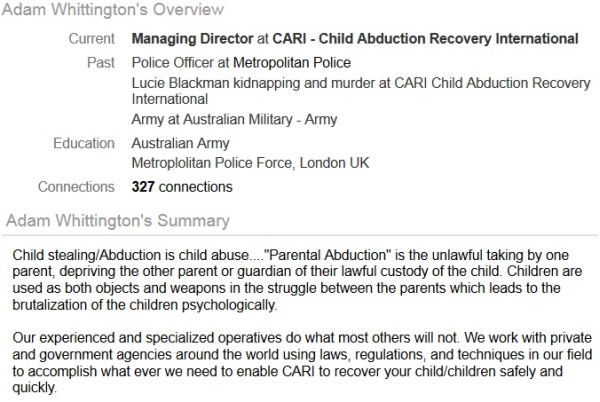