I am a resident at Gerald Crescent and would like offer some insights into the recent saga between Madam Chung and Yang Yin, the China tour guide who tried to swindle the widow’s millions. The background story has already been published but I will offer more supporting evidence. As one of the residents living near this particular bungalow, I have spoken to Mdm Chung and her family on some occasions and have heard from them, and other neighbours, more about Mr Yang Yin.

Yang Yin recently tried to apply for Singaporean citizenship. In order to get his PR in 2009, he used money taken from Madam Chung to purchase a degree from a “University of Financial Trade” in Beijing to aid his application. However, the university does not at all exist.

To further his application, Yang Yin also set up a shell company named “Young Music and Dance Studio” to declare his occupation as a dance teacher. Despite the shell not having any active students, the ICA approved his PR application without any due diligence.

I subsequently wrote to the ICA in 2012 to complain but this fell on deaf ears.

Over the past 5 years, Yang Yin has taken countless art pieces from Madam Chung’s private art gallery to sell off at a discounted rate to their worth. Her private art gallery occupies an entire building in the grounds of her bungalow and contains numerous priceless art pieces. He has additional represented himself as an art expert to further this goal [Please see his namecard]. 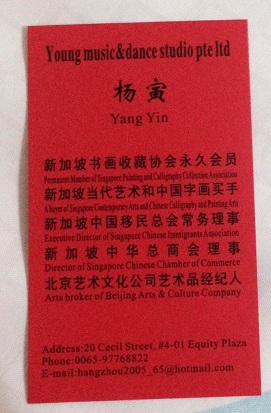 To further his citizenship application, he has also participated in numerous PAP grassroots events while claiming to help the PRC community in Singapore as the “Executive Director of the Singapore Chinese Immigrants Association” and a “Director of Singapore Chamber of Commerce”. He has numerous interactions with PAP MPs and ministers. He even has had the opportunity to take pictures with PM Lee. 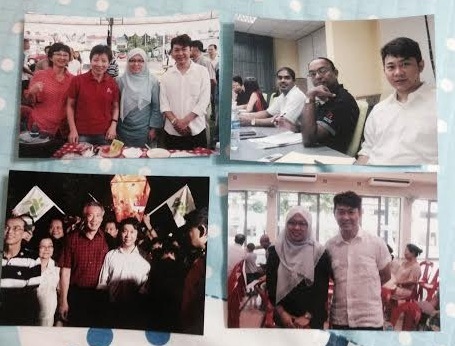 Over the past 5 years, he has taken millions in cash from Madam Chung and lived lavishly off the proceeds, including taking monthly holidays to China and Japan on first class flights while staying in luxury suites. At the same time, he has neglected Madam Chung to the extent that the former multi-millionaire does not even have $1.50 to buy bread.

In February, Dr Amy Khor launched the tray return campaign. Apparently this is supposed to …