First on the list: The number plate 1 MID is reserved for high-ranking dignitaries hosted by the Singaporean Ministry of Defence. The car itself is believed to have its own civilian registration and is thought to be supplied by a civilian contractor. Fun fact: It is plated 1 MID just for the occasion by attaching the special plate with rubber bands (just visible)!This guide is based on an assessment of more than 5,000 individual number plate identities for Singapore Armed Forces (SAF) vehicles compiled by yours truly over many years.The database is a labour of love bordering on obsession that pulls together pictures and notes taken of SAF vehicles seen on public roads or during open houses/events organised by the Singapore Army, Republic of Singapore Air Force and Republic of Singapore Navy.Readers with no inkling of SAF number plates should be relatively conversant by the time you reach the end of this post.As you read this, please be aware there are exceptions to every guideline noted. These have been flagged out with pictures to help you understand the exceptions to what is generally observed.Background to MID number platesAll wheeled and tracked SAF vehicles are identified by an alpha-numeric code on number plates carried on the front and rear of the vehicle. The same applies to equipment designed to be towed like cargo trailers and LAMBE landmine clearing device, which fall outside the scope of this discussion.The three letters that Singaporeans and SAF observers commonly link with SAF vehicles are MID. These letters are drawn from the initials for the Ministry of the Interior and Defence (MID), the ministry set up after Singapore became independent on 9 August 1965. This ministry was the forerunner to the present-day Ministry of Defence (MINDEF) and eventually hived off its home affairs functions to a separate ministry known as the Ministry of Home Affairs, which groups vehicles for the Singapore Civil Defence Force, Singapore Police Force and other Home Team agencies that oversee drug enforcement, immigration and so on. 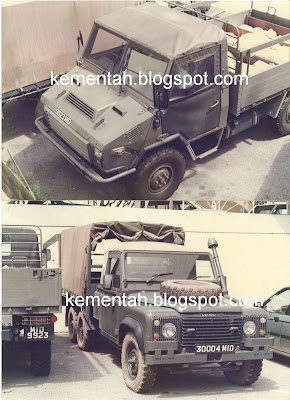 Seldom seen number plate: Few SAF servicemen would have seen the Iveco-Fiat light truck above as it was not chosen for SAF Guards battalions after field trials, during which it carried the 9923 MID number plate. We find the vehicle interesting as it was marked withboth types of MID number plate naming styles – 9923 MID on the front and MID 9923 on the rear (most MID-plate vehicles stick to one naming conventional for front and rear plates). Enthusiasts would note that the 992x-series is a special plate. Note the three-axle Land Rover Defender alongside – another rarity that can send one's heart aflutter.The naming convention for MID number plates is interesting because variations have been noted on different vehicles. SAF vehicles have been observed with the xxxxx MID sequence and the MID xxxxx sequence.

At the risk of sounding eccentric, we would like to point out that the sign a towing vehicle displays (see example above) to indicate the SAF vehicle which is on tow uses the naming convention MID xxxxx – which is a point we find noteworthy as the vast majority of SAF number plates are of the xxxxx MID variety.There have also been rare instances when a single vehicle was seen with both naming conventions. For SAF number plate collectors, occasions when such unique vehicles are seen on the road never fail to generate some excitement (to put it mildly).

Exceptional: RSAF aircraft tow tractors registered using both types of naming conventions. The tractor in the middle is interesting as it is one of the few SAF vehicles with a suffix to the vehicle number.The MID naming convention is not the only alpha-numeric system adopted by MINDEF/SAF. Exceptions include SAF vehicles thought to have been registered with civilian licence plates (scroll all the way to the end) as well as a naming convention unique to SAF war horses deployed in Afghanistan which adopted the naming convention with the letters SAF followed by a number.There are further exceptions to the alpha-numeric guideline. For instance, AMX-13 light tanks were identified by four-digit numbers. When upgraded to SM1 standard in the late 1980s under Project A, each light tank received a five-digit number with no accompanying letters. Other SAF A-vehicles have also been noted with just numbers as their identifier.Number plate colours and fontsRegardless of naming convention, the vehicle identities usually appear on number plates comprising white letters on a black background. 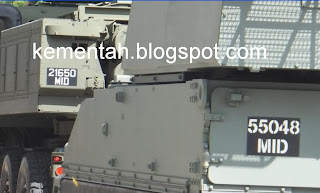 Different typeface: Seen here on Singapore Artillery hardware are two types of number plate font styles. The laminated letters on the HIMARS vehicle are noticeably different from the stencil type font displayed on 55048 MID, which is a Primus 155mm SPG. Compare and contrast the font used on the Primus with the narrow type stencil font below sprayed on an AMX-10. 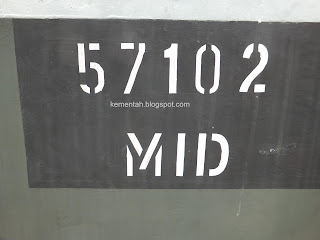 The type face is usually of the sans serif font. The different font types observed indicate some latitude given to SAF units and vehicle suppliers when making number plates.The majority of armoured vehicles have their number plates sprayed on using templates. These are identified by the stencil type font of which there are at least three different type faces. Again, there are exceptions such as the MaxxPro MRAPs which carried embossed aluminium number plates with raised silver lettering on a satin finish black background.Numbering conventionThe smallest number on an SAF vehicle seen thus far is the numeral 1. Vehicles include 1 MID, which is a staff car number for high-ranking visitors (not the Minister for Defence or SAF generals) and SAF 1. 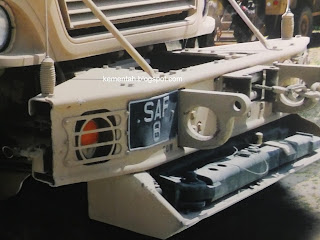 The MaxxPro MRAP SAF 8 (above) carries a stamped aluminium number plate with embossed lettering, matt silver on a satin black finish. Notice the thin silver border on the number plate, unique to this class of armoured vehicle.The SAF 8 identifier was used only in Afghanistan when the vehicle was deployed for Operation Blue Ridge. It is not know why the SAF had to start a new naming convention as the pair of Singapore Artillery ARTHURs MID 56331 and MID 56332 sent for OBR kept their usual MID number plates.From Singapore's independence till the late 1980s, SAF vehicles were noted with four-digit number plates. The 10000 barrier was broken not with the Iveco-Fiat three tonners, as is generally believed, but with passenger buses that served the RSAF (example 10001 MID) and the Singapore Army.The upgrade for M-113s resulted in vehicles in the 4400 MID-series and 6000 MID-series tagged with a five-digit alpha-numeric number that had no apparent link with the previous identifier.To date, no SAF vehicle has been observed with a six-digit number plate. But should you know of any, please let us know! 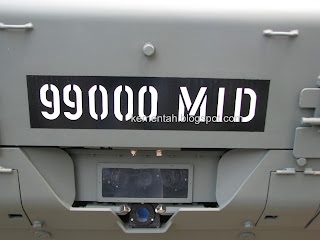 The vehicle type with the highest number plate series is the Terrex. These have been observed with plates starting from 99000 MID. Interestingly, while the first Terrex unveiled by former Minister for Defence Teo Chee Hean in 2009 carried the number plate 99001 MID, another Terrex has been observed with the 99000 MID. The latter is believed to be the first Terrex to have rolled off the Singapore Technologies Kinetics production line.Series startersOn that note, we come to series starters. We define these as the first vehicle which kicks off a new numbering sequence.A number of series starters have been identified over the years. These include the series starter for the Primus 155mm self-propelled guns, which was found during an artillery live-fire exercise during Exercise Wallaby in Queensland, Australia. This was done by the simple expedient of walking among the battery between salvos (behind the gun muzzles, obviously), which was an interesting experience to say the least.Finding the series starter 55000 MID – the first Primus – and meeting its crew was a memorable experience because one doesn't always chance upon series starters.

Same but different: The Bionix IFVs seen here can be readily distinguished by their different number plate sequences. It was number plate tracking which raised the question why the BX2s were assigned different numerical sequences. For those of you who know, the roles for both types of BXs are quite different!All SAF full-time National Servicemen (NSF) and Operationally-Ready NSmen (i.e. reservists) entrusted with SAF vehicles would probably known that the type of vehicle can be discerned from the numbering sequence. See for example the two BXs pictured above.This is why every occasion to see an SAF vehicle in public should be treasured.The day you tell yourself you don't have to see a certain vehicle because you have seen it before is the day the database loses its value because one has let slip an opportunity to refresh and revalidate raw data.No number plate is too insignificant. All SAF vehicles are head-turners, whether they are GP cars or something more menacing.Every contribution contributes to better awareness of how vehicles are identified. And the learning journey and search for new numbers must be relentless. 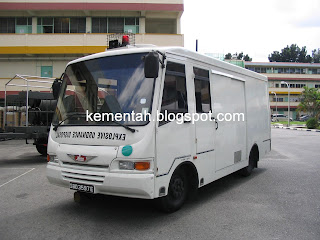 Low profile: It is intriguing to speculate why this EOD vehicle carries a number plate with civilian registration and why a G, P or Y plate was not assigned. If low signature was one objective, this is defeated by the letters on the front of the vehicle. Other EOD vehicles in 36 SCE's stable carry the usual MID plates. 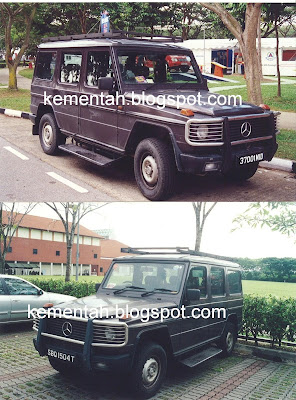 Special duty: Here's one that baffled us. 37001 MID with no formation sign, reinforced front bumper, side steps and roof rack suggest has a special role after the bells and whistles are added. This type of Mercedes-Benz G wagen was also seen with civilian registration.On that note, we come to SAF vehicles seen with vehicle registrations usually associated with civilian vehicles. Different types of vehicles used by the Commandos and Singapore Combat Engineers have been seen with such number plates.It is thought that civilian registrations add to the low signature when such vehicles are deployed for situations in public areas.The variations you see here show why this blog finds the subject so fascinating.You will never see them all during your lifetime, but there's always one more SAF number plate just waiting to be discovered which can shed light on the nomenclature adopted for the SAF's war horses.You may also like:Guide to radars and defence equipment on HDB flats. Click hereAcknowledgements:With grateful thanks to SAF number plate enthusiasts who, over the years, contributed pictures and tipoffs of SAF vehicles seen in public areas.Addendum