SOME MATTERS OF TRAIN-ING

In the midst of the brouhaha caused by ACS(I) chartering 5 trains (instead of 80 buses) to transport its students to the rugby final between St Andrew's and ACS(I), one beautiful thing has gotten buried in the muck of dissension and strife. 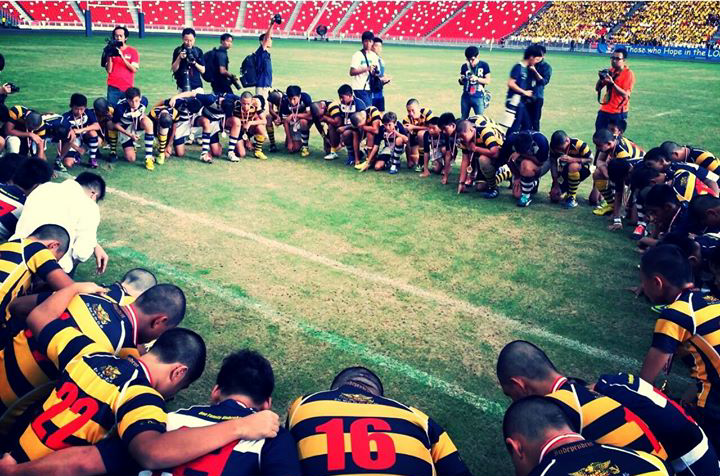 Rival teams from ACS(I) and St. Andrew's kneeling in prayer TOGETHER. Picture credit to Red Sports – HERE.
Building Bridges of Love
Clearly, for the boys, the day was not about winners and losers, the haves and the have nots. It was about doing one's best and having a good time. In the end, it was about understanding that it is only a game… and playing games is an opportunity to make friends (not enemies), build alliances (not tear people down with strife).
I am so proud of these boys. From both schools. I think they have a thing or 2 to teach us adults. No? It is heartening to see values education in action. These are not schools where the boys must WIN at all costs. There is no need to be at the top of everything, fighting and competing to the last man standing. These boys (from both schools) are indeed Beacons of Truth and Light.
The funniest thing is that these boys can look past their assuredly extreme rivalries on the pitch to kneel together in corporate prayer, but us adults are whinging about 5 trains used to transport them.
Put yourselves in their shoes? These boys are between 14 to 18. At that age, they live for the game. It consumes them. Winning is so important! It is what they have wanted for 1 whole year. The competitive pressures must be intense! Emotions must surely run high. Look at the dignity of the St Andrew's team! Look at the graciousness of the ACS(I) boys!
Elite Road Sweepers and Garbage Collectors
In contrast, LTA is fairly doing a war dance, brandishing spears and banging their shields (and grunting "Hng-a… hng-a…") because SMRT did not seek its permission to charter trains to schools, notwithstanding that the practice has been going on for years. Neighbourhood schools have less money. It is cheaper per head to charter a train than a bus. So, neighbourhood schools near the MRT have chartered trains for NE Day since forever. Every year.
Suddenly, when ACS(I) does it, it becomes an elite thing to do? You know how some women can wear the cheapest clothes and still look stunning? Well… I think that ACS boys of every ilk can sweep the roads and pick garbage, and make that look elitist. They can't help it you see. ACS boys just have that knack. Heck… I think an ACS boy can probably make nose digging look elitist.
Advanced Planning for SMRT Is Good For Commuters
SMRT has been wise in allowing charters only during off-peak hours. The practice makes sense for commuters too. Would you rather have the schools (neighbourhood schools and ACS(I)) involved send their children en masse via the MRT without any prior warning to SMRT? When the schools decide to make their kids all queue up at the MRT station, they are members of the public you know. They have every right to take the train. In this scenario, SMRT cannot plan for the suddenly large influx of passengers. Instead of sending in more trains, to relieve the high volume, SMRT would have to make public commuters wait 5 times longer to board their trains.
No one has done anything wrong!
With some advanced planning, SMRT has done its part by adding 5 trains to the service. The schools have alerted SMRT that on such a day at such a time, there will be high volume passenger traffic. Schools save money that can be used to fund other educational endeavours. Schools ensure children's safety at reasonable costs.
Come on! 80 buses on the roads from ACS(I) to the stadium would be a nightmare for cars. Think of the traffic jam! Also, 80 buses collectively consume more petrol no?
Revenue Generating LTA
I think this is just LTA trying its best to cream more money off SMRT. All that money goes to government coffers, no? SMRT has been incorporated. It has to make ends meet to survive. It has no choice. It is structured that way by some politicians.
LTA has a choice. It is not supposed to generate income for the government, even though it does earn a lot with the car import tax, VEP, the parking coupons, the ERP, the road tax…. whoa! I would really like to look at LTA's revenue statement and compare it with SMRT's!

Don't people realise that whenever LTA fines SMRT, the money has to come from somewhere or SMRT will go bankrupt and close shop, right? Then, no one gets to take MRT anywhere.Money comes from where? Go figure!