[YOUR LETTERS] GILBERT GOH EXPLOITS OLD LADY FOR OWN PUBLICITY

[Editor's Note: Mr Goh has clarified that he doesn't see the need to remove his post unless the family members are embarrassed that their grandmother is still working at such an old age]
Dear editor,
It is time for the whole of Singapore to know what a opportunistic and manipulative person Gilbert Goh really is. He likes to portray himself as a hero who helps the poor and unemployed, but he is actually a zero who is capitalising on the plight of these people to gain more publicity for himself.
Recently he posted 2 pictures of an elderly lady working at Changi Airport and highlighted her 'pitiful state' of "struggling with the heavy thrash (sic) in the departure hall" and even sought the public's help to identify the old lady so that he can provide her with financial assistance. Sounds so noble right? Not if you consider that he did not even personally know the old lady or her situation but he just assumed that the old lady was working because she is poor and jumped to the conclusion that she needed financial assistance. (He did say that he wanted to contact her to find out more about her financial situation, then he should have gone ahead and verify it with her before publicly posting her picture and making assumptions about her right?) Furthermore, it seems like he posted the photos of the old lady without her permission, thus failing to respect her privacy. Is it right of anyone to take a picture of someone else without their knowledge, then proceed to make unsubstantiated assumptions about them? This just reminds me of the gutter media site STOMP. 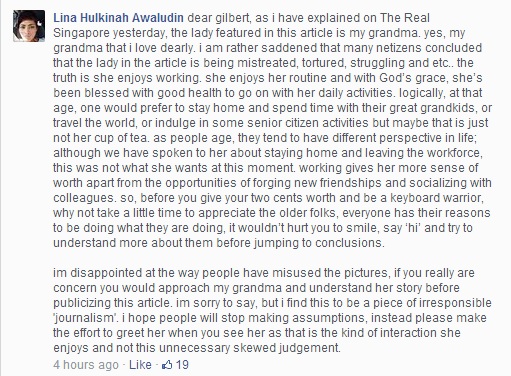 Not only that. When the old lady's grand-daughter clarified that her grandmother is working not because she needs the money but because she enjoys working and repeatedly requested for Gilbert to remove his posting, her pleas fell on deaf ears as he refused to take down his post. He would rather let the old lady and her family suffer the cruel humiliation of hurtful comments and insults by others who continue to misunderstand and assume that she has to work because her family is not able to provide for her. And he cannot claim ignorance in this case because apparently he had even clicked 'like' on the grand-daughter's post. What does this say about this person who supposedly spares no effort in helping to improve the lives of the less fortunate? If he is indeed so truly concerned about the old lady, shouldn't he respect the wishes of her family and take down his post, or even offer an apology for causing this whole misunderstanding in the first place? But he doesn't because he is only doing so for his own self-gain and publicity, and not because he is an altruistic person. Let us not be fooled any longer by this fake and manipulative man who does not deserve any support for his despicable act of making use of poor elderly person to bolster his own popularity and ego.
I have also attached the screenshot for you to see how heartless he is.
Ben