DURING their meeting at the Istana in November 1978, China's Deng Xiaoping told then Prime Minister Lee Kuan Yew that it would take a long time for the Chinese economy to recover from the tumultuous Cultural Revolution.
Mr Lee said in reply that he believed China would rebound quickly and even do better than Singapore because it had the "progeny of the scholars, mandarins and literati".
Looking ponderous, Deng said: "You're right. There is no reason for China's economy to be lagging behind."
Shortly after returning to Beijing, China's de facto leader launched the opening up and reform policy at the Communist Party's third plenum in December. That landmark policy, which ushered in more than 30 years of rapid economic growth for China, would cement Deng's political comeback, after surviving a purge in 1976, to become the country's paramount leader. This important piece of history in the Sino-Singapore relationship was re-enacted, possibly for the first time, in a state-sanctioned TV drama on Deng on Monday night.
It was his only official visit to Singapore, the last stop of a three-country tour that included Malaysia and Thailand. But only the Singapore leg is featured in the 48-part serial titled Deng Xiaoping At History's Crossroads, which was produced by state broadcaster China Central Television to mark his 110th birthday anniversary last Friday. 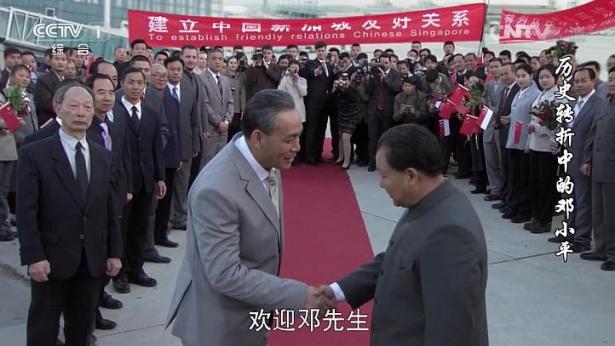 Four other foreign leaders featured in the serial, which chronicles Deng's life and work from 1976 to 1984, are former British prime ministers Edward Heath and Margaret Thatcher, former United States president Jimmy Carter and former Japanese premier Kakuei Tanaka.
Observers say the inclusion of Mr Lee and the Istana meeting reflects the unique place Singapore holds in China's development from 1978. The former Singapore leader is played by veteran actor Zhang Guangbei.
"Singapore, out of the three countries he visited, probably left the deepest impression on Deng. The TV series also shows that Chinese leaders appreciate the positive role Singapore has played in China's reforms," Shenzhen University's Sino-Singapore expert Lv Yuanli told The Straits Times.
Many of the scenes involving Singapore corroborate Mr Lee's recollection of the events in his memoirs. Mr Lee's character, who spoke in English and Mandarin, appeared in episode 23 on Monday and again in episode 26 last night. Two episodes are shown every night.
In Monday's episode, Mr Lee was shown paying attention to details in preparations for a dinner banquet, instructing officials to get ready a spittoon and ashtray for Deng, as recorded in the memoirs.
Even when officials pointed out that smoking was not allowed in the Istana, Mr Lee insisted on the items, telling the officials: "You see, we're receiving a great man in world history. He is a special guest. I hope he would be pleased."
Share