Sungei Road Thieves’ Market, which is the original flea market in Singapore established in the 1930s and where there most likely were fleas, will be paved over to make way for the Sungei Road MRT station expected to be completed by 2017.

That’s more than 80 years of history eradicated in one fell swoop.

Even as the words “organic” and “authentic” get thrown around a lot these days, nothing in Singapore quite captures the essence of these expressions better than Sungei Road and its ragtag group of peddlers, who sell everything from stolen to broken items with questionable resale value.

Nonetheless, here are 6 things you ought to know about Sungei Road Thieves’ Market — like the things you find there — which might still have some value:

Peddlers are not required to pay rent, but on the condition that they cannot sell brand-new items. This rule is official as it was reported in the media before, but it is uncertain how the authorities actually enforce it.

But there is no doubt there is a trust and honour system in place there, where the communal norms probably ensures nobody plays punk.

Sungei Road got its name because it runs along the banks of the Rochor River (Sungei Rochor).

This photograph is from 1982 and shows Sungei Road, from Kallang Road and Weld Road. Notice how empty Singapore was.

The Singapore Ice Works was built in the 1930s and situated near the road, which is why that area is also fondly known as Kek Sng Kio, which literally means Frosted Bridge, by the Hokkiens and Teochews.

It was formerly a supplier of ice blocks.

The factory was torn down in the mid-eighties after its land was acquired by the authority for redevelopment.

4. There used to be fiercer turf wars

As space is limited, things can get quite heated.

The flea market has been downsized before in July 2011, where half its space had to make way for the construction of the new Jalan Besar MRT Station.

But even before this, peddlers were known to spray paint the tarmac ground in the past to demarcate their designated area so that each knows his space.

That practice is probably illegal these days as it constitutes vandalism and no one wants to attract further attention from the authorities who are trying to get them to move.

Nowadays, each of the allocated metre-by-metre space is on a first-come-first-serve basis.

Pang Lim (above), 57, who is the managing director of food court chain Koufu, was an illegal fruit seller in Sungei Road for five years in the 1970s.

From that humble beginning, he saved enough money to rent a coffee shop in 1990 with his younger brother and uncle, and later rented out the stalls to other hawkers.

The business took off and Koufu was born out of that one coffee shop. These days, Koufu has an outlet called Rasapura Masters at Marina Bay Sands that sells hawker food.

The other guy who found riches is Poon Buck Seng, who picked up junk and sold them at the Thieves’ Market in the 1980s.

He raised a capital of S$50 initially, and within seven years, started his business picking up junk, or paying small amounts for things people were throwing away in the 1980s. He would then take his goods to sell at the Sungei Road Thieves’ Market.

Within seven years, he had saved enough money to rent a shop space nearby to sell computers, refrigerators, videotape recorders and television sets.

In 1993, he registered his second-hand goods trading business and began to focus his business in exporting used computer parts and made a few thousand dollars every month.

Five years later, Poon had saved enough money to buy a 1,636 square feet (152 square metre) freehold property worth S$730,000 and was offered S$1.4 million for the unit in a collective sale later.

However, by 2002, Poon’s export business went downhill and he decided to end it and went back to his old karung guni trade again.

In the early 1970s, opium dens were common in the Sungei Road area.

Opium addicts were mainly the poor, elderly people from the working-class who sought the drugs out as a form of escape as life was particularly hard for them. 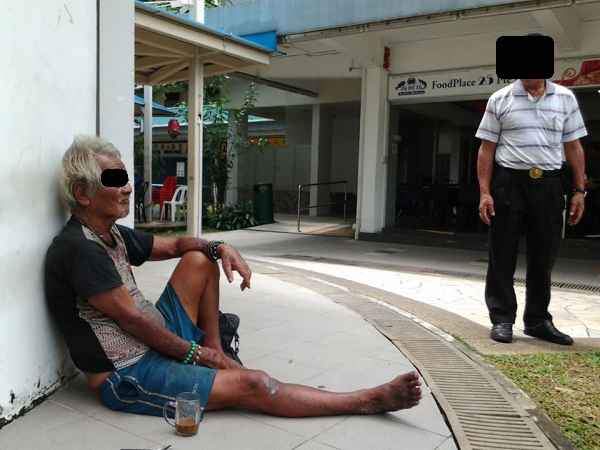