Dear administrators and members of the “We are against Pink Dot in Singapore” Facebook group.
We are writing in the spirit of concerned parents (about 80 of us) who are part of the “We are against Pink Dot in Singapore” group. We joined the group because we, for either religious beliefs or our own family values, do not support the Pink Dot event. Nothing more. Nothing less. It has been about 1-2 week since we joined and we are beginning to wonder if we have put ourselves in the right mission. Don’t get us wrong, we still do not support Pink Dot, but we do not wish to be spewing hate from our mouths like some of the members of this group do.

A little confession from us on book censorship first ……
We also discussed the fact that some of us did not join this group to ban library books but it has now turned into a war on censoring Children’s books. We would hereby like to pledge our support for the "Singapore's Parents Against Library Censorship" group because we stand by the view that many other children books send undesired messages to our children (don't make us start) and there is no end to censoring if we start.

We pride ourselves to be responsible parents and level-headed citizens. When I look at some of the posts on this group, I worry for the children of those who have posted some rather distasteful comments. Therefore, we took a step back and some of us even put aside our religious beliefs while we debated this issue. (Yes, we actually met up because most of us are already friends) We feel strongly enough about not dividing our society that we decide to pen this controversial article as a lesson to ourselves and our children.
We look at some of the strong personalities in the group and we decided that we will learn from what they have posted in the group and draw teachings for our children appropriately.
Here is a lowdown of the good, the bad and the ugly.
LEARNING TO HAVE INTEGRITY AND NOT SELF-CONTRADICT
Teaching our children not to talk righteous for the sake of sounding intelligent, because it is not intelligent. If we believe that we are the good ones and we should do nothing, then this group “We are Against Pink Dot in Singapore” should not even have been started to begin with. We believe this group exist for a reason and we are doing something.

At first glance, this post below appears really sensible coming from an administrator of the group. However, digging in further will only expose this as another superficial post to make someone sound intelligent. If you go into Panglima Hussein Hitam’s profile, he has made some mudslinging without much substantiation in the past. We will teach our children to be dignified and walk the talk to be wholesome human beings even if he/she is the last human being on earth, not just within a certain community group.

and what happened to no hate messages? At least explain why you are mudslinging?

And to be a really responsible person, one should at least be honest with your real name, if not the profile photograph (which we understand if you do not wish to divulge). It is like writing to the forum in the Straits Times. You don’t have to send in a picture but at least sign off with your real name. Doing a search on Google will reveal how Panglima Hussein Hitam has attempted to hide his identity due to irresponsible Facebook posts in the past. Refer to this source.

http://irwan-syah-ibni.blogspot.sg/2013/11/busted-panglima-hussien-hitam-is-irwan.html
LEARNING NOT TO BE MALICIOUS
These 2 posts below are the one that all of us parents unanimously do not agree. Well, that’s an understatement. WE ACTUALLY CONDEMN THEM! We are not here to associate bestiality with homosexuals. If you did your research, bestiality is associated more with heterosexuals than homosexuals. In most other countries, the acts of bestiality are committed by a male human to a female animal or vice versa. 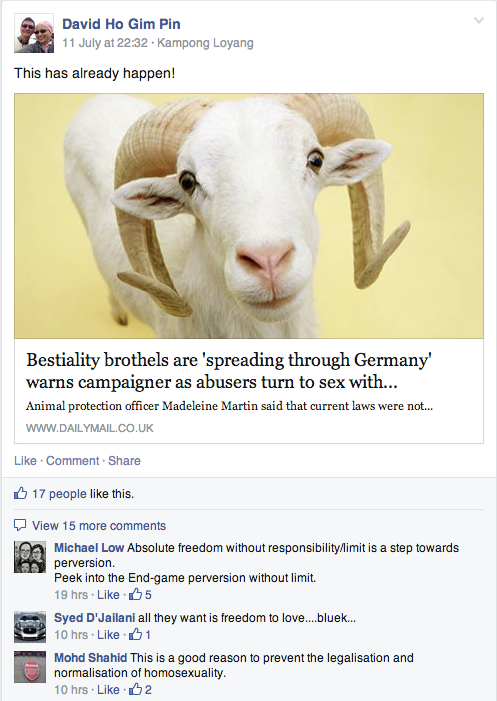 We are also not here to associate sex crimes with homosexuals. Pedophilic behaviour is displayed in both heterosexuals and homosexuals and we have some not-so-fine examples in Singapore. There are more police reports of incestuous relationships between Father/Daughter, Mother/Son, Brother/Sister than those between 2 brothers. We may not support the Pink Dot movement, but let’s all be logical too. Homosexuals do not condone sex crimes between non-consenting parties and that includes both non-consenting humans ands and non-concenting animals. Dissecting words for the sake of making an unsupported accusation is a form of hate speech and if Panglima were to stay true to disallowing hate speeches, this post should have been removed. 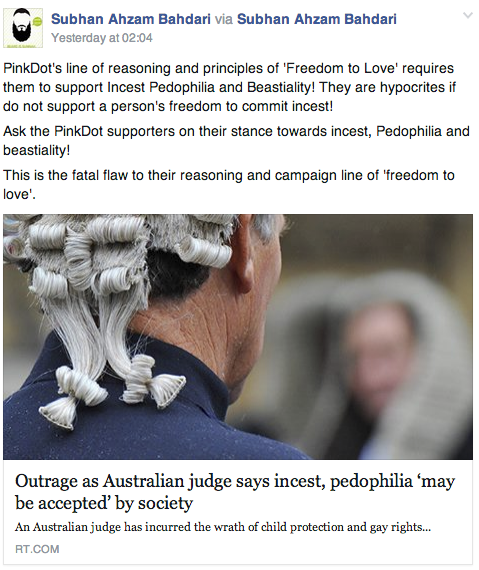 Making these unintelligent accusations at the LGBT community will only incite more hate in the community which parents like us do not wish for our children to grow up with.

LEARNING TO BE SENSITIVE TO OTHERS
In a group like ours that was formed by a diverse group of people comprising of Muslims, Christians and we are certain there are a lot of Atheists and Buddhists, we still have insensitive people who are relentless in pursuing their biblical agenda such as the post below. This is a lesson we will draw for our children to be sensitive to other religions and people with other beliefs in a secular society and in an open group like this. 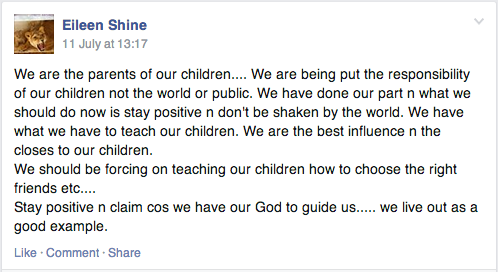 LEARNING TO HAVE A BALANCED POINT OF VIEW
We mentioned earlier that we are against the pulping of library books or censorship in general but guess what, we are open minded, and we respect people who make a well-informed point, while drawing somewhat logical analogies, such as the post below.

And when someone posts responsibly and logically, she is not afraid of displaying her photo and name in full because such a responsible balanced post stands up to many forms of argument. One such member of the group is Julie Chin. This post by Julie Chin is by far the most sensible, thoughtful and logical of all and we give her the utmost respect. It is a pity Julie posted this on her personal Facebook page and not to the group.

If this group were to continue to exist, we would like to propose that Julie Chin takes over as the administrator of the group. She has displayed true integrity, sensibility and common sense and is most suited to moderate this group.

LEARNING TO BE GRACIOUS AND HUMBLE
Before anyone posts something derogatory, just know that there are friends, families, colleagues out there whose point of view will greatly differ from yours because guess what, they may not be gay but they may have brothers, sisters, friends, colleagues who are. By putting yourself out there, you are allowing people to judge your character, your level of intellect and take action against you. We welcome everyone to make their point of view BUT it is the tone and the attitude that makes a difference between stating your point of view and being overly cocky, assertive and overly-imposing. Case in point, there is already someone who is a friend of Mr. Teo Kai Loon (the guy who wrote to the library about the books) who has now exposed Teo’s picture on Facebook. She is likely a friend, or a colleague or someone who objects strongly enough to his viewpoint to take an action against him.
AND HERE'S OUR GRAND-STANDING CONCLUSION
When this article gets published, we know that there will be people within the group (especially the administrators) whose first reaction will be “there are traitors amongst us”. Well listen up, you hardcore fundamentalists. Singaporeans are no longer a homogeneous bunch of people and that is a good thing because we are not North Korea. We are going to agree on some issues and disagree on others, even between 2 good friends and even between spouses.
We seek to hear other’s responsible point of view. If you think you need to censor members in order to continue to be aggressive in your posts, then I am afraid you have turned into extremists and you are the ones whose passion, if wrongly channeled, will lead to, or encourage crimes of unrest in Singapore. Therefore we would like to urge Carrie Yu to watch her tone and her attitude because it is bordering on militance.
A lot of us have different faiths and we want to allow the faith to make us a better person, not use it to exterminate other members of society. If you cannot live up to that, you should shut down this group because it goes against the peace loving “community norm” of this country (Thanks Jaacob for coining the word!). And stop using Christianity and Islam as argument in an open group because most of you are only using it whenever it is to your advantage. There are other people in the group who are not Christians and Muslims so please walk the talk as responsible members.
We are sorry for keeping our identity anonymous because we still believe in the cause of why this group was set up and we want to continue to be a part of it. However, we would really like some quality conversations where we can learn to see many different points of view without making accusatory hate speeches. We will continue to be the silent watchdog for this group and we will not hesitate to commence on writing Chapter 2 if we see the conversations run irresponsibly amok.
Thanks for reading.
Concerned Parents of “We Are Against Pink Dot in Singapore” Facebook group
Share