The CPF Minimum Sum Scheme will have new increases from next month as reflected in this Ministry of Manpower (MOM) press release:
http://www.mom.gov.sg/newsroom/Pages/PressReleasesDetail.aspx?listid=562
Naturally this ever increasing trend has been met by derision by those who already find it difficult to meet the previous increases. The Govt through Manpower Minister, Tan Chuan Jin and MPs like Hri Kumar have been trying to paint a positive picture with explanations and 'so-called discussions' with residents. (Neat idea huh? Have discussions afteryou introduce policies not before!). And we can always trust the 'ever reliable' main stream media to do their part to trump the great and good about the policy. They even threw in the plight of a widow who squandered a million dollars from her husband's pay-out and donations. All this is to suggest that the Minimum Sum Scheme (MSS) is an excellent policy because many people cannot handle large sums of money on their own. They will squander it, leaving them with nothing in their old age, thus making the State and tax-payers bearing the cost of their upkeep beyond the normal requirements and duties that a State must provide. 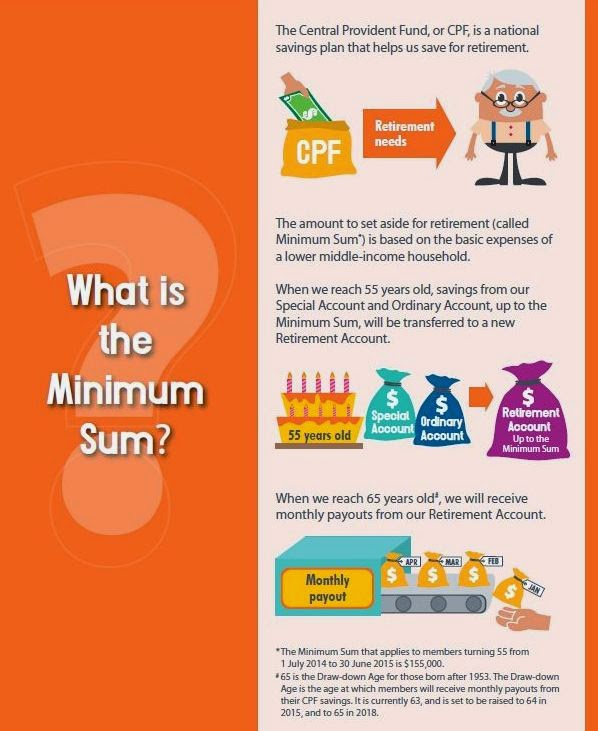 MOM brochure explaining the benefits of the Minimum Sum Scheme.
And on the flip side, the opposition has been questioning the 'patronising manner' in which this increase and the policy itself has been rammed down the throats of Singaporeans, with no avenues to express their disagreement, disappointment and frustration. A CPF protest headed by blogger Roy Ngerng was given a lot of coverage, especially when his writings on the 'failures' of the CPF Scheme saw him face a demand letter by the PM, for 1 of those posts which defamed the PM. This saga has firmly put the MSS in the spotlight and many people I've met have been expressing anger over the ever-shifting goalposts for the Minimum Sum Scheme. CPF is now having a new moniker –Cannot Pay Finish. Although technically this is wrong, as monies in the CPF is not a tax, and you are not paying for it but saving into it. Yet the MSS now truly feels to many more as a payment/tax than a savings, because of the scale of the increases and huge amounts involved. Although the monies will come back to them, it'll never come as 1 lump sum but in piecemeal, so these people will never ever have a chance to hold a large amount of their own money in the hands.

Muslims performing the Haj in Mecca. The MSS is preventing a growing number of Muslims here from ever having enough to fulfil this very vital religious pillar.

Comment from a Malay guy: 'Long ago I thought okay, once 55 got CPF money, I want to go Mecca and do the Haj. It's something very important to us Muslims. Then what happen? I'm told sorry no, you don't have enough! I only got $5,000. How to ever fulfil my religious obligation like that. This amount not enough for just me to go for Haj, don't talk about my wife also.' 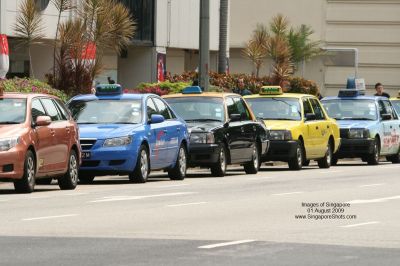 Taxi Drivers are amongst the hardest hit by the increasing MSS and CPF policies.

Comment from a taxi driver: 'This policy is horrible for us. We got no CPF contribution, so I can't meet the MSS. I still got a bit left over around $30,000 from my working days, which I used to pay for my flat instalments. Now 55 coming, all this will transfer to my Retirement Fund. I then have to pay my flat off in cash. Do you know how difficult being taxi driver is? I am barely coping now, and here they tell me, sorry no more money in the CPF to pay your HDB, so you must pay in cash! How am I going to find another $1,000 or so extra on top of what I must drive to earn now?
The Govt wants me to just drive more and more and so I can die faster is it?
These are the kind of comments, especially the last one, where people have some money in the CPF, which they feel can be used to pay for their flats, but once they turn 55, it's game over, all this go to the Retirement Fund and they are in quandary. They still owe a large portion on their flats and whatever money they get if the sell, will go back to the CPF. If they don't sell, they need to find extra funds to pay the instalments in cash. If they sell, they must still buy which defeats the whole purpose because of rising costs.

Runaway public housing costs is the 'elephant in the room' that's being avoided in the MSS debate. Solve it and you solve the MSS issue.

In essence the whole issue of the MSS boils down to the one and most obvious reason – runaway costs of public housing. If the Govt had put a stop and cap all those years ago to ensure that public housing would be cheap forever, meeting the increases in the MSS might not be such a big issue. Many people will meet it and still have extra left over to use as they see fit. Those who bought long ago, have no real worries because they can sell for a huge return, but eventually this bubble will burst if it already hasn't. This group is getting smaller all the time and the future generations are now faced buying flats at enormous rates far beyond their earning power. Worse to come is when they hit 55, they must pay it in cash. The European Union recently warned Britain that its property prices were getting far too high above the average means of ordinary workers. But Britain is a large country and people can afford to move less expensive places and avoid the cities, we are a city state with no where to run to.

Former DPM Toh Chin Chye strongly disagreed with the MSS when it came up for debate in his final term as an MP.
Why hasn't the Govt seen this coming? After all the people have right to criticise them over this, they are the highest paid in the world. When you pay someone top dollar, you don't pay for excuses or feeble half-fixes – like buying a studio apartment. Perhaps a Minister or 2 would like to try living in one and see how 'wonderful' it is! Where's your children gonna sleep, where is your maid going to sleep, where are you to put your guests?  Yes there are people who need assistance in managing money. Yes there are those who squandered it all. Yes there are women from 3rd world countries coming over to fleece these men of their hard earning savings. But you cannot have a policy to penalise the majority over the actions of a few. For sure every policy will penalise some people in a way, but it's always just a tiny fraction and you can cater future policies to help this group. This policy is penalising everyone over the actions of a few. No other Govt in the world dares to treat its' citizens as kids. No other Govt dares to hold on to the money of the people and return it in a manner they deem fit. No other Govt dares to let public housing reach runaway prices. It's only this Govt that continually implements policy that will in the future, make life very unbearable for the people. As former Indian Finance Minister P Chidambaram said, 'A democratic Govt must in the end implement policies that people want'. It's not a question of being popular but a question of respecting the will of the people who elected you.

CPF Building entrance in Robinson Road. Do policy holders there and in Govt actually understand how life works on the ground or they just prefer to govern by data?

For such a drastic policy shift, the Govt cannot simply say, 'We have the mandate because we were elected. We can do whatever we want, if you don't like it, vote us out'. However at the same time, shift the goalposts everywhere and make it hard for people to vote for the opposition. Some people may not oppose everything the PAP does, some tolerate the PAP because they feel the opposition isn't ready to govern. But if you don't give these swing voters a chance to vote in referendums where 1 or 2 major policies are subject to scrutiny, effectively you are telling them – to hell with you, you either take it (meaning accept the PAP as a package to do what we think right) or leave it (dare you to vote us out). And because of these 1 or 2 policies greatly affects them, these swing voters will say – okay fine, if you're gonna play this game and call our bluff – to hell with you too, we'll vote for another party willing to change these policies.

A chart showing the increases in the MSS since 2003. In 10 years or so, it has nearly doubled. But has salary doubled especially with the Foreign Influx?

The MSS is becoming an impossible dream – the idea of people working their whole lives in order to have a tangible reward at the end of it. Instead of imposing a '1 size fits all' or just giving out a derisory $5,000 (a figure coined by the PM's lawyer), the MSS should be on a more widespread platform. Different people with different sums should be able to take out more, eg: below $25,000 – $5,000. $30,000 – $6,000. $40,000 – $8,000. $50,000 – $10,000 and so forth until a capped amount of $80,000 is reached. After $80,000 whatever excess should be given to the holder. Those who owe HDB on their flats, should be allowed to continue paying from the fund. But in the final analysis, if the Govt doesn't bring down the housing prices, allow more people to withdraw a greater portion and put a stop or cap at the MSS, the whole concept of CPF will forever equal as the title suggests – Cannot Pay Finish.
Share

Do Singaporeans Even Have Any Choice?