Coney Island, island, is located off the coast of the north-east region of Singapore. Its original name was Pulau Serangoon. In early colonial times, Coney Island was the name given to another island — the 'rabbit shaped' Pulau Satumu on which Raffles Lighthouse stands. Today it is part of Punggol New Town, a unique 'Waterfront Town' linked by bridges to mainland Singapore.
At least two islands have been named Coney Island in Singapore's short colonial history. The first Coney Island was the original colonial name for Pulau Satumu (also spelt Setamu or Setumu), one of Singapore's off-shore islands on which Raffles Lighthouse stands. Today's Coney Island had originally been named Pulau Serangoon. It had remained uninhabited and is an important location for migratory birds like the endangered Magpie Robin and the Plover. Kelongs once dotted the waters off the island. In the early days, and for a long time, Coney Island was an island retreat popular with families looking for picnic spots. It was accessible from Punggol boatels or Changi Point. In later years, the island became popular for water-skiing, boating, and fishing.
Situated right opposite Punggol New Town, it was slated for development under the 'Punggol 21' plan for the 21st century where land reclamation works around Coney Island would double its size to 50 ha. Upon completion of the 'Punggol 21' development, Coney island will be part of a unique 'Waterfront Town'. There are also plans to build three bridges, linking the island to the mainland. The bridges would be 100 m each, with one dedicated to pedestrian traffic whilst the other two would accommodate both pedestrians and vehicles. Residential and recreational facilities would be built on the island. An added attraction would be a regional park with camping facilities. 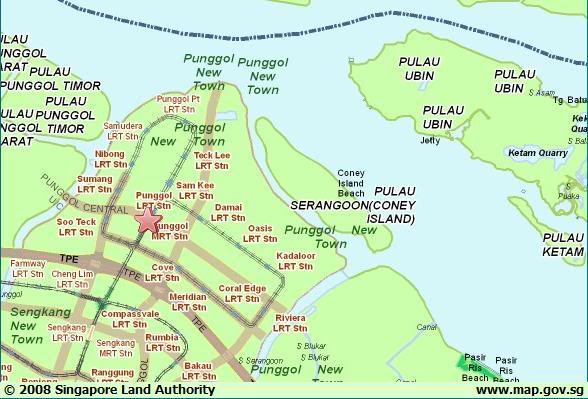