In the latest twist in the Roy Ng v Lee Hsien Loong (the PM) saga, he's actively seeking donations from the public to fund his legal defense. He makes his pitch here:
http://thehearttruths.com/2014/05/29/please-support-roy-ngerngs-defamation-legal-defense-fund/
He's thus far raised close to $50,000 in 3 days and in order to be accountable and transparent, he says he'll publish a daily update of all monies received. (which he has done on his Facebook (FB) page). He's not only provided a bank account number, but has gone the 'full monty' – he's provided his home address (for cheques), Paypal account, transfer instructions for internet banking and even got his father to open an OCBC bank account (for those without a POSBank/DBS savings account). And for his June 7th protest, 'buckets' will passed around for donations. He's clearly spent a great deal of effort and time to go all out to raise funds, clearly much more effort and time than he had spent trying avoid this stage (getting sued), or on working with the PM's lawyer to settle the matter out of court. 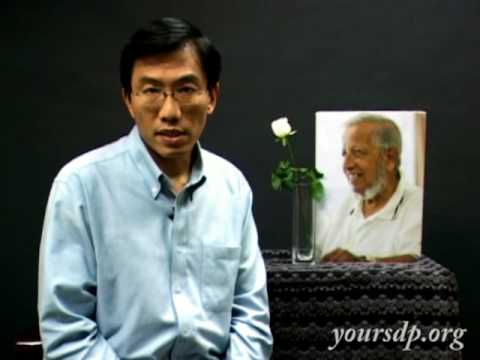 Dr Chee in a tribute to J B Jeyaretnam. Did either man when faced with a lawsuit, give out their home address, bank details and other data, in order to get the public to donate money?

He's the first person who has resorted to such a broad based appeal to raise funds for a legal defense in a lawsuit by a PAP leader. J B Jeyaretnam and Chee Soon Juan did not resort to this. When sued, they raised funds from their own party members and well-wishers or took steps on their own, like writing and selling their books. Even fellow blogger Alex Au who's facing a contempt of court case initiated by the Attorney General's Chambers, did not resort to such desperate measures. He did not go crying to Singaporeans begging for money. If you wanna help, fine, he'll provide details but he was prepared to defend what he said on his accord first and foremost, using his own means. Although Chee Soon Juan also made a public appeal to help raise funds, this was done long after the lawsuit was heard and the monies was not to pay his lawyers, but to pay off damages in order to clear him from bankruptcy. He spent a number of years as a bankrupt, and as a Party Leader, this severely handicapped him from performing his duties and of course standing for elections. Finally as a last resort after exhausting all avenues, he made the public pitch. He did not as Mr Ng has done, shamelessly portrayed himself as a victim and went running to the public for their money at the first instance.

More effort has been spent to make an appeal, come out with the above profile than saving the public the cost by settling the issue and returning to talking about the CPF.

WP chief Low Thia Khiang is not against the Minimum Sum scheme? Did Roy Ng bother to find out why? Or is his version – the one and only 'truth' we must be forced to accept?

The Workers Party agrees in principle with the Minimum Sum. That some money has to be set aside for old age, given that now people tend to live longer. Back in 1970s and 80s, if you lived to 70 it was already a huge achievement, 80s rare and beyond even rarer. Because life expectancy has risen, costs will rise if no one has savings or exhausted it all. Therefore the key question that Mr Ng should focus on is how much is reasonable to be set aside and how much is to be returned. Perhaps he should have sought the WP's position on this or that of other parties before he embarked on his solo mission.
3) Why Make Lawyers Richer and Citizens Poorer?
If he was really so concerned about the CPF, shouldn't he have just settled the matter out of court? After all with a lawsuit, his effort has to be spent on it, not to mention money. Even if his motivations was to show the world that the PM is a bully and hope to increase the opposition vote, was it a smart move? The next election is 2 1/2 years away, this is not January 2016. If elections are imminent and he wants to sacrifise himself in order to shame the PAP, maybe it could have an effect in the polls.

Roy Ngerng has money and time to print T-shirts and go all the way to Norway to do 'research', but he needs the public to pay his legal fees.

Clearly he's not thinking straight and is surrounded by like-minded persons, who only are thinking of present day gimmicks and stunts in order to raise their profile. Or as Ms Han revealed, he really believes he can be a martyr and then claim sanctuary elsewhere. This is the new element in Singapore politics – the 'Looney Fringe', people who do dumb things, who are not helping the opposition cause, who are self-serving, who do not do hard work on the ground but instead expect the public 'to carry the can' for them.

If Roy can publish correspondence from his lawyer to SC Singh (which rarely anyone does in a lawsuit), surely he can also detail what instructions he gave his lawyer and what advise he received, in a spirit of transparency and accountability.

Since in his appeal, he admits the court case will be about damages, why in Heaven's name is he going that route? If he can only afford $5,000 as he says, why go to court and seek $70,000? The questions mentioned earlier that need more answering than a list of donors and amount donated are:
1) What were his instructions to his lawyer?
2) What did M Ravi advise him in regards to the apology?
3) Did he seek advise on what he should do thereafter, did he inform his lawyer about the offending video and new article, and what was the advise?
4) Did he ask his lawyer to ask what amount in damages would be considered acceptable? If not why not? Why wasn't more done behind the scenes to come to a figure? A very normal occurrence in lawsuits.
5) Did he ask his lawyer about the cost of going to court?
6) Did he consider or seek advise and instructions about the final costs – damages plus legal fees? Did his lawyer advise him, the court will most likely make him pay the costs of SC Singh, if they ruled in favour of the PM (a conclusion he has conceded)?
7) Did he tell his lawyer he has no money to fight the case in court? What was the advise given?
8) Whose idea was it to solicit funds from the public? His, his friends etc?
9) Did his lawyer inform him that costs alone could bankrupt him? – SC Singh commands an enormous fee, normally in excess of $250,000 for a simple High Court matter.
10) In light of the above, will it be his plan to ask the public again in future for more funds to save him from bankruptcy? Or after bankruptcy, to seek a lesser amount from the PM to settle the matter and again go to the public to help pay for it?
Just consider in layman's terms, you can afford around $5000, the other party wants more, won't you at least find out how much? Won't you negotiate? When you don't have that much, will you agree to legal fee of $70,000? Will you not be concerned that the final figure could be in the hundreds of thousands, maybe even close to a million – in legal fees alone (for the plaintiff's lawyer)? Which is better, to ask the public's help to pay for the damages (before the court case), knowing that the PM will donate it to charity (or get an undertaking that it will be done as in previous cases), or to ask the public to pay legal fees of up to $70,000? I don't think the damages sought would reach $70,000, plus the fact, had he simply done what everyone else in a lawsuit does, apologise and settle early, he might have gotten away with anywhere from $5,000 to $10,000, maybe even payable in instalments and also to charity.

Easily 1 of the top 5 lawyers in Singapore, Mr Ng would surely be made aware how much costs he would have to pay for SC Davinder Singh (above).
So why go to court to make lawyers richer, both plaintiff's and defendant's? Why make the public pay for this? And even if the public's help is still sought, given how he's been talking of helping poor Singaporeans, why not use this to help those who really need it – the needy? M Ravi is not poor, he has enough clients, SC Singh certainly isn't poor, why go to court and make them earn more? Roy Ng, if he wants to talk about transparency and accountability, should answer these questions.
Finally, has M Ravi advised him of the very high possibility of a 'Mareva Injunction?' SC Singh will be well within his legal rights to ask the court to grant one, given that the defendant has no assets in which he can pay the damages and costs. If SC Singh gets this, this means the $70,000 raised will be frozen and used to settle the damages and then only, costs. So Mr Ravi might not be getting anything upfront at all and it remains to be seen whether there will be anything left over to pay him. Did Roy consider this? How is he going to raise funds to pay his own lawyer then? If the $70,000 isn't enough, and Roy is made a bankrupt, M Ravi won't get paid. And all this public fundraising has gone to waste.

Someone uploaded this recent photo on Roy's FB page, to show he's only eating 'plain rice' now. Yeah right, he goes to a café with a friend and orders only plain rice!The 'Looney Fringe' will do anything to garner attention.

It's becoming increasingly clear that Roy Ng has been taking everyone for a ride with his flagrant disregard for doing things the right and easy way. He's more interested in personal fame and glory. He talks on the one hand of speaking up and helping his fellow countrymen, but on the other hand, does the opposite, making wrong, stupid and hasty decisions that makes them have to pay for each publicity seeking stunt he does. He's being extremely selfish and not being upfront, transparent and accountable for his actions and motivations. He wants to be remembered as a martyr, but only if the public will pay for it. A most reprehensible course of action.
Share