Last month, the Land Transport Authority announced it had awarded civil, electrical and mechanical contracts for the Thomson and Eastern Region Lines with a total value of nearly $1.15 billion.

The 30-km long Thomson Line will enhance rail connectivity in the north-south corridors to the Central Business District (CBD) and developments in the Marina Bay area.

The contracts include the construction of Mt Pleasant, Stevens and Maxwell stations, and communications system, signalling system and platform screen doors for the 2 MRT lines.

The construction of Maxwell station has been awarded to Hock Lian Seng Infrastructure for approximately $222 million.

Construction of the stations will commence in the second quarter of 2014 and they are supposed to be completed by 2021.

According to its latest annual report [Link], Hock Lian Seng is a leading civil engineering group in Singapore. The group was listed on the Mainboard of SGX in December 2009. Its major customers include government and government-related bodies, such as LTA, HDB, PSA Singapore Terminals, PUB and CAAS. The group’s other core business is property-related i.e. property development and investment.

One of its iconic projects featured in the annual report is the construction of Marina Coastal Expressway (MCE). The project included the design, construction and completion of MCE for LTA. The annual report states that Dr Ong was appointed director of the company on 23 September 2011, not long after he stepped down from politics after the 2011 general election.

While Dr Ong was a PAP MP, he was also the clinical director and COO of Ren Ci Hospital & Medicare Centre, and Ren Ci Community Hospital from 2000 to 2009.

In April 2009, during the trial of former Ren Ci CEO Venerable Shi Ming Yi, it was revealed that a $60,000 loan had been granted to Dr Ong by Ming Yi, even though the hospital did not have a formal policy on it. Testifying in court, Ren Ci’s former human resource manager, Joyce Teng Lee Foong, said the staff loan was made to Dr Ong when he first joined the hospital in 2000. The $60,000 loan is understood to be the largest sum ever approved by Ming Yi.

The revelation shocked many Singaporeans. Social media expressed their disbelief that a doctor and MP had to resort to borrowing from a charity. Others felt that it is morally wrong for Dr Ong to knowingly borrow money which was meant for needy patients. Some cynically commented that had Ming Yi not gone to trial, the public would have been none the wiser about the loan. Still others wondered if they were donating money to a charity or to a moneylender?

Under the glare of social media, Dr Ong wrote to the media to explain the circumstances under which he received the $60,000 loan from Ren Ci. Dr Ong then said:

I was an employee of GIC in 1999. I was offered by Ren Ci Hospital and Medicare Centre to be Director, Medical & Paramedical Services in January 2000.

When I borrowed the sum of $60,000 from Ren Ci, I was not an MP. It was lent to me as staff, and was part of the terms on which I agreed to join Ren Ci. I have since repaid the sum fully.

Ming Yi was later found guilty of misappropriating Ren Ci’s funds by approving loans, falsifying accounts and giving false information to the Commissioner of Charities. He was sentenced to 10 months’ jail and appealed the case. On 27 May 2010, Justice Tay Yong Kwang dismissed the appeal but reduced the sentence from 10 months to 6 months for Ming Yi’s significant contributions to Ren Ci and society.

Mr Chua Leong Hai is both executive director and CEO of Hock Lian Seng. He is the founder of the Hock Lian Seng Group. He has more than 40 years of experience in civil engineering work in Singapore and led the group to undertake infrastructure projects in Taipei and Shanghai in the 90′s.

He also has real estate investment and development experience in Malaysia and Indonesia. Mr Chua is responsible for the overall management, formulation of business plans, strategic positioning and business expansion of Hock Lian Seng Group.

Mr Chua was conferred a PBM at the National Day Awards in 2010 for his grassroots services to the community. He is the Patron of Kampong Ubi-Kembangan Citizens’ Consultative Committee [Link] in the same ward that Dr Ong was serving as MP, prior to his stepping down from politics: 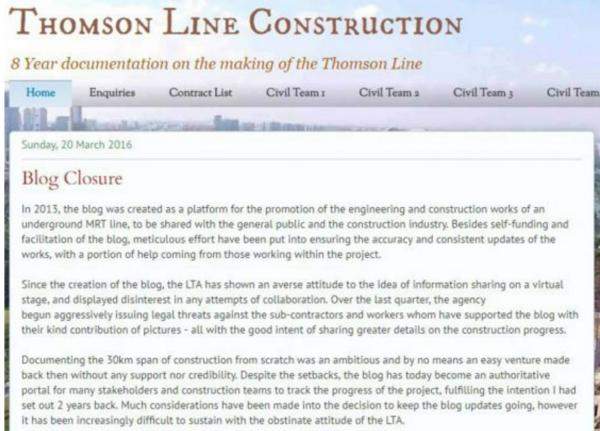