PHILIPPINE EMBASSY GUIDELINES AND REMINDERS FOR FILIPINOS IN SINGAPORE

PHILIPPINE EMBASSY GUIDELINES AND REMINDERS FOR FILIPINOS IN SINGAPORE
In view of recent incidents involving Filipinos in Singapore, the Philippine Embassy has issued the following guidelines to remind all Singapore-based Filipinos to observe proper behaviour and follow the laws an regulations of the host country.
1. Obey the laws of the host country. As foreigners who work, live or study in Singapore, Filipinos are obliged to respect the laws and regulations of the host country, and should behave properly as guests and visitors
2. Filipinos should respect the differences between Filipino and Singapore culture and be sensitive to these differences.
3.Refrain from engaging in partisan politics, especially during the election season in Singapore. Filipinos should avoid any involvement in partisan political debates and activities in Singapore as this is a violation of Singapore laws.
4. Filipinos, including Permanent Residents, are not allowed to participate in political campaigns and do not have the right to vote in Singapore elections. Under Singapore laws, errant foreigners may be charged under the Societies Act, the Public Entertainment and Meetings Act, the Immigration Act, and/or the Penal Code if they engage in partisan political activiti in the city-state.
5. Avoid Participating in online debates, chats or blogs that are political in nature. Refrain from explicit negative comments, particularly racial or religious slurs and insults. Participating in these online debates will only inflame the situation and may result in untoward incidents, possible loss of employment and investigation by authorities. 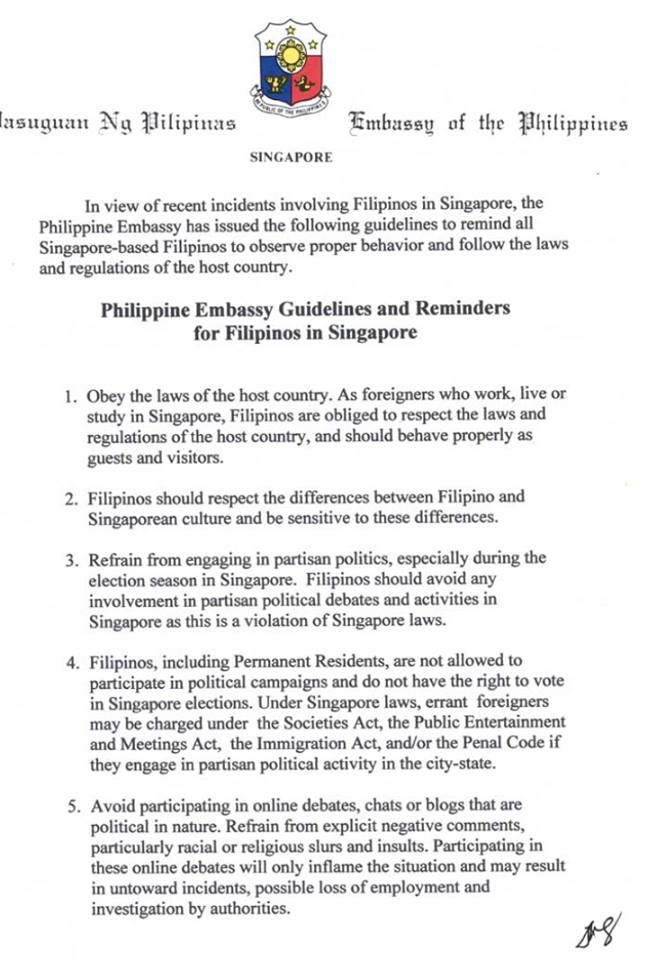 Not True That Singaporeans Can’t Do Jobs of Foreign Trash

ILLEGAL SHORT TERM HDB ROOM RENTAL EXPOSED! WILL HDB DO ANYTHING ABOUT THIS?