Some of you might have seen me on Good Morning Singapore on Channel 8 two days ago. If I didn't show it much, I was pretty worn out after having to climb out of bed at 6am. The previous night had been an exceptionally rough one as Ariel was feeling feverish, couldn't sleep well and groped around for the boobs every half an hour.

It was the first time I did a live recording at Caldecott Broadcast Centre, and it was done with no teleprompter, no cue cards, no rehearsal and no idea of the questions I would be asked on set. All I knew was that the topic of the day was the Jubilee Baby Gift – something that I actually felt interested and motivated to talk about. But yes, I did it and you bet I achieved a sense of accomplishment thereafter. What's more, the interview was conducted in Mandarin and I think I made my mum proud to watch me that morning and see that I have not forgotten about my mother tongue.

For those of you who have not heard of it, the Jubilee Baby Gift is a small yet meaningful gift to welcome Singaporean babies born in 2015 in conjunction with the SG50 celebrations. It will contain a set of 5-10 items that the newborns can use in their early years and symbolises our wishes, hopes and aspirations for our future generation.

The National Population and Talent Division (NPTD), which is leading the Jubilee Baby Gift drive, has been gathering gift ideas online and at road shows and as of two days ago, which was the submission deadline, around 6,500 suggestions had been received.Some were practical items, for instance baby stroller, diapers, bibs, clothes and so on. Some were commemorative, like gold coins, medals and ornaments. Some were more creative, like lifetime free admission to Gardens by the Bay. Others I heard of were more preposterous, for example lifelong free education, $20K cash gift etc.I am not saying that the gift pack should not be special, it should be an unique offering but there must be a limit to how special it can be. Let's say if education is free for babies born in 2015 up till tertiary or even university level, how fair is it to be babies who are born on say 31 Dec, 2014 or 1 Jan, 2016, or those in the same generation? Fine, you might say that there has to be a line drawn somewhere and fairness is always a vague term. So, if the government gives away such a lucrative package next year and sets a precedent, what happens when our nation turns 60? 75? 100? What are Singaporeans going to ask for in order to give birth? Will they stage a strike and refuse to have babies altogether in that year if the package does not meet their expectations?In the first place, having babies should never be a direct result of incentives, it should always be out of a love for kids and for having a family. I wrote a heartfelt post titled "Through the eyes of my child" on this issue previously and shared the reasons that compelled me to decide to be a SAHM. The post went viral for a period of time and garnered over 2,000 likes on Facebook, which made me realise that there are people who think like me but at the same time wonder, why then is our total fertility rate standing at merely 1.19?If the government is to help to boost fertility, then they will have to think for the long term and continue to roll out more polices to encourage parenthood and marriage. That will, however, not be through the Jubilee Baby Gift which is more of a celebratory gift and a symbolism. It wouldn't be logical to hope for fertility rates to hit a peak in just the year 2015 and then drop to a new low in subsequent years when there are no more incentives and privileges.I can talk about this all day long but I think that having a low fertility rate is an ingrained issue and reasons for young couples not wanting kids span from lifestyle habits, societal norms, career-driven mindsets and in many cases, a lack of a strong love for kids. In my humble opinion, having a kid doesn't mean you need to be filthy rich, have a car or a big house. Having four kids, yes, but not one, or maybe even two. I see people living in three-room HDBs with four kids while I see couples living in condos with none. To me, it's about the willingness to make lifestyle changes once you have a family and in order to have this willingness, you must first have that love for children I spoke about. 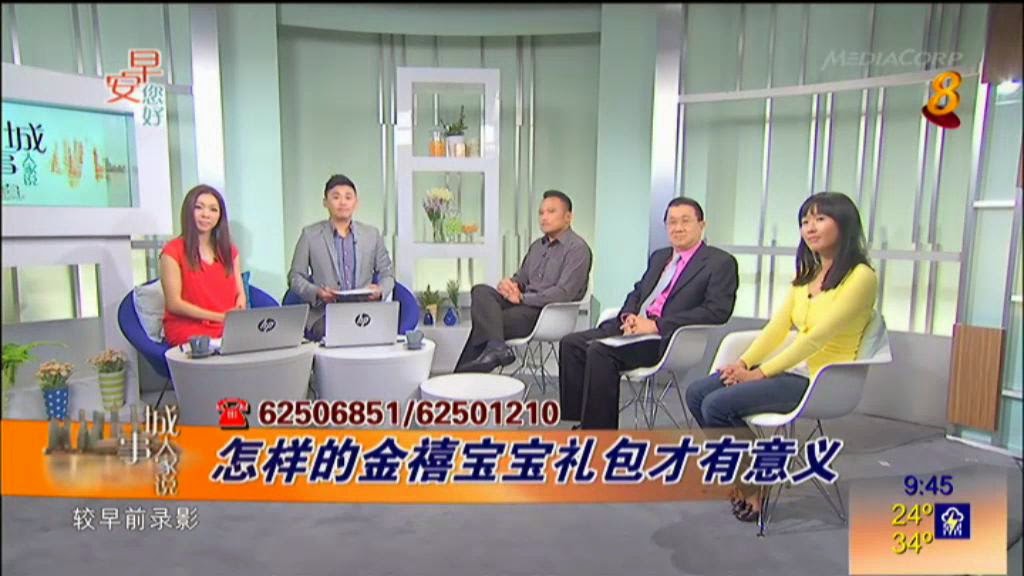 It was my honour to meet up with the hosts of Good Morning Singapore, Qiqi and Junwei, as well as Jim Lim, founder of REAL Academy and Dr Fong, a consultant obstetrician and gynaecologist. Me? *cough* Just a plain, normal mum of two who occasionally likes to blog.I particularly liked Jim's idea of a portable changing station for dads and Dr Fong's idea of having a publication with the names of the parents and Jubilee Babies. I am not sure if I shared anything useful from a mum's perspective but I am glad I managed to talk about a point I felt strongly about.As we celebrate Singapore turning 50 and honour the hard work of our pioneers, we must at the same time remind ourselves that we have a responsibility to raise and educate our next generation so that our country can continue to grow and prosper. Our people are Singapore's biggest resources and we must not forget that our children will be the pillars of the nation in decades to come.A child today will be a hope for tomorrow. Don't you agree?