RIOT HAPPENED IN SINGAPORE BETWEEN THAI AND KOREAN WORKERS IN 1985

Has anyone noticed that the Little India COI has been bending over backwards to reassure the police that the force and the COI are on the same side? Ex Police Commissioner, Tee Tua Ba, who is also a member of the COI, has especially taken great pains to make it clear to the public that he has no public difference of opinion with the current police commissioner, Ng Joo Hee. Credit has to be given to Mr. Tee Tua Ba for asking fair questions without publicly undermining the person who has taken over his old position.

So thanks to the COI, we now know that the Little India riot wasn’t the first of its kind, post independence. Commissioner Ng Joo Hee mentioned a little known riot that broke out back in 1985 while he was on the stand. Apparently that riot broke out due to a conflict between Korean and Thai workers at a construction site. It’s also a coincidence that Mr. Tee. was the top cop on site back then when the police intervened to quell that incident. This little tidbit alone should explain to the uninitiated why Mr. Tee was selected by the G to be a part of the Little India COI.

In case you’re wondering why this is probably the first time you are hearing about the riot of 1985, CP Ng said it was because there wasn’t an internet and social media to proliferate news about it back then. And it was thankfully confined to a construction site.

This COI has really been illuminating for Singaporeans. Every time someone new takes the stand we either learn something new or have our suspicions validated. Like how we literally do not have enough beat cops patrolling the ground.

It really seems surreal to see our top cop making the plea for 1,000 more officers for his wish list to beef up a police force that was dramatically outpaced by our population explosion. One has to really wonder why no one else aside from Ms. Sylvia Lim sounded the alarm on the fact that one cop to 614 people is way below international bench marks. The G really needs to think long and hard about how it can revolutionize police recruit and more importantly retention. It’s truly a miracle that Singapore hasn’t turned into a hotbed of crime.

Yes, Singapore is a safe place and we have used technology to help make up for the human shortfall. Case in point: Singapore is going to have 100,000 cameras set up all around the island according to CP Ng. Policemen will also be outfitted with body cameras as will their patrol vehicles. The conspiracy theorists who scream “big brother is watching you” are going to have a field day with this revelation.

The technology part certainly sounds fascinating but it shouldn’t detract from the CP’s real message:

Here’s another pertinent point raised by the COI: There is a very real concern that the large numbers of foreign communities living here is a powder keg in itself. Seems that we’ve forgotten about the pre-existing animosity amongst the communities. Rivalries and hatred (also known as historical baggage) that predate Singapore and Singaporeans are brought here by our migrant communities in addition to their cultures, customs, politics. The Little India COI has already heard snippets about how the Bangladeshi and Indian communities don’t like each other due to preexisting tensions between countries and cultures. Now imagine hundreds of people who basically don’t like each other living under one roof like the foreign worker dormitories. It’s a powder keg to say the least and honestly should give us some insight on how our forefathers lived back then.

We tend to always look at discord among migrant workers as their own private business with nothing to do with us. “Oh they fighting amongst themselves? Not my tai chi as long as it doesn’t drag me into it.” Our eagerness to pretend that all is well blinds us to the fact that whatever happens within the dorms might spill out into other dorms and worse, spread out into Singapore at large. This was why the G was so quick to have it’s representatives visit the dorms to meet and greet with workers and find out their grievances. One has to wonder how long can the people in charge keep up with this facade of containment before it blows up in all our faces.

Therefore, what CP NG disclosed about Geylang is worrisome. He actually used the word “lawless” to describe the atmosphere that pervades the enclave better known as Singapore’s red light district. The area is a congregation point for many foreign nationals including the Chinese. It is an area with a inexplicably high crime rate (135 versus Little India’s 83) and public offenses committed (49 versus 25). Going by the statistics disclosed, 100,000 foreign workers descending upon Little India every week seem like a mild annoyance when compared to those who throng Geylang’s streets with their sex and drug wares.

Geylang’s patrons’ open animosity towards the police has resulted in attacks on police officers and vandalism of patrol cars. In effect Geylang is becoming more ghettoized than Little India ever was. And that in itself is a truly frightening thought.

CP Ng did an excellent job at the COI: He defended his men’s performance while acknowledging what was left wanting and he promised rectification. The question now is will the policy makers work with him to bring this promise about?

So G if you’re listening, can we please just give CP Ng mo mata? 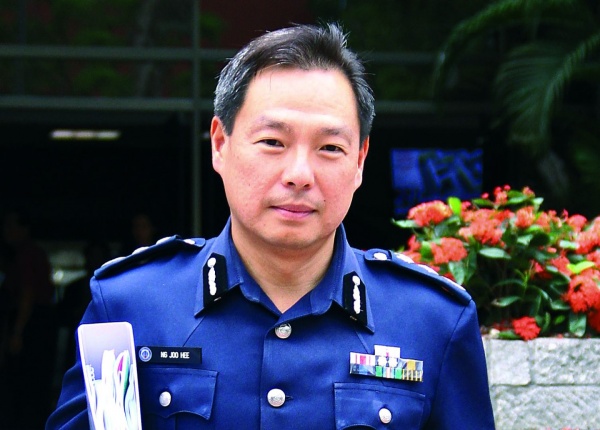