Five reasons for you to Love MacRitchie:

Read on to learn more.

Habitats. The area in concern is a legacy left behind by the declaration of a Municipal Catchment for MacRitchie Reservoir in 18671. This mature regrowth forest is almost 150 years old now, forming an important seed bank for the regeneration of surrounding forests.

Situated in the core area of the Central Catchment Nature Reserve (CCNR), it also sports patches that make up a significant proportion of Singapore’s remaining primary lowland dipterocarp forest. Only 0.49% (2 km2) of this vegetation type is left in Singapore1. We cannot afford to lose more.

The proposed Cross Island Line (CRL) also passes through four natural stream systems. These streams have vastly different biophysical characteristics such as lower temperature, pH and velocity, as compared to the concretized waterways we are more acquainted with. Many native freshwater organisms can only thrive in these natural streams, beyond which hardier alien species that have been introduced by Man have largely taken over.

Biodiversity. Throughout Singapore’s history of development, especially since the 19th century, we have lost about a third of our native forest fauna along with extensive deforestation2. Primary and mature regrowth forests in CCNR today still house more than half of the country’s residual native biodiversity2, representing their last population strongholds. Further extinction would mean loss of seed dispersal agents, stunted forest regeneration, ecosystem degradation, etc. Learn more about MacRitchie’s threatened fauna and flora.

Tunneling. Works associated with the construction of CRL threaten to damage the irreplaceable habitats and biodiversity of MacRitchie Forest. Tunneling, although seemingly of little impact to surface ecosystems, can in fact cause problems related to alteration of underground hydrology, disturbance to fauna by ground-borne noise, and loss of pressure to surface, requiring extensive works above the affected site.

Soil investigation. Of greatest and most immediate concern are soil investigation works because of the potential damage by the placement and operation of boring machines. Works will involve boring of 70 m-deep holes at intervals of 15-20 m. Large clearings and access roads will have to be made to accommodate personnel and equipment. Soil compaction, alteration of forest microclimate, loss of topsoil to erosion, siltation and toxic contamination of stream systems are all inevitable consequences should core drilling for soil investigation works proceed.

Our Nature Reserves are not contiguous from the perspective of their inhabitants. Reservoirs, pipelines, roads, military facilities and security fences form barriers to wildlife movement, effectively reducing their habitat range and population size. Fragmentation also prevents individuals from mating across isolated patches, resulting in degrading gene pools. Surface engineering activities will contribute to further fragmentation, painting a grim picture for the future of CCNR’s flora and fauna.

Recognizing the value of biodiversity on quality of life, Singapore became a signatory to the Convention on Biological Diversity (CBD) since its inception at the 1992 Rio Earth Summit. This international commitment makes it an obligation for the State to undertake measures with reference to Protected Areas to3:

Allowing MacRitchie Forest to give way to urban development would be to contradict the Government’s efforts to promote biodiversity conservation and its commitment to CBD.

Nature Reserves are areas that have been set aside for the long-term conservation of natural habitats and biodiversity. They are afforded the strictest of legal protection among all types of green areas in Singapore, and their status should not be taken lightly. In accordance with the Public Trust doctrine, the State has an obligation to use public land for intended purposes only. Aside from being home to our surviving forest wildlife, CCNR is probably the most significant green lung in our cityscape, ensuring that the forest can continue to provide valuable ecosystem services in future. These services include water catchment, flood control, urban heat island mitigation, recreation, education and research. Nature Reserves should essentially remain off limits to development, and be kept intact as sacred places with less tangible long-term benefits.

As Singapore seeks to up the efficiency of our public transport system, minimizing transit time has become the priority for recent MRT developments. However, a quicker train ride should not diminish the value of MacRitchie Forest and the ecosystem services it provides. Considering the likely cost of forest degradation, it is justifiable to go that extra mile (about 1.7-2.0 km, actually) by tunneling around the Reserve instead.

We urge LTA to give serious consideration to the following alternative routes as recommended by Nature Society (Singapore) (NSS)1: 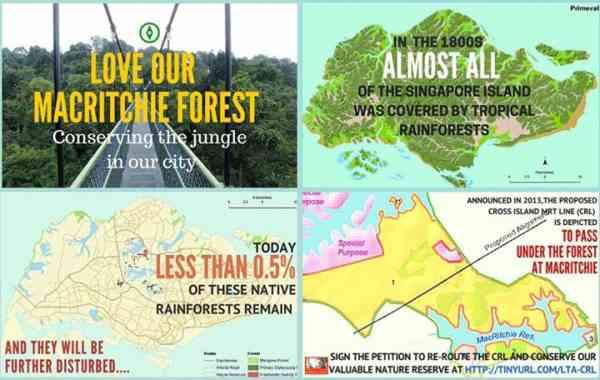 SAVE MACRITCHIE RAINFOREST FROM DESTRUCTION, STOP LTA BEFORE ITS TOO LATE