CONFESSION OF A BISEXUAL MAN

I received an email from a person who claimed that he used to be gay. I wonder if there is such a thing since the gays has been saying that their sexual orientation was due to biological factors but I guess we can label him as bisexual since he "goes both ways". The received email would be great to educate readers on what is happening within the gay community and if what this guy claim is true, all parents should be careful when they send their boys to the public pool. The security in such public area should strengthen as some incident may go unreported for fear of embarrassment.
Below is the article (unedited except that the photographs had been watermarked). I will not include a screenshot of the email as it is rather long.

I am in my early 30's, happily married with a 3 years old son. I cannot quite describe whether I feel blissful.

Recently there is some spotlight on gays. I met my current wife when I was 26 and after 2 years of courtship, we married (I think she courted me). I am very fortunate to know that she doesn’t mind my past.

I am tired of the minority vocal gay community who go all high and mighty preaching for equal rights for all and screaming discrimination when the community are actively engaged in sexual activities in private like any straight people would do without any fear of caught. The same minority gay people are giving a bad name to the majority quiet gay couples who are eager not to draw additional attention to them.

I am going to share the other side of the tale – how the gays commonly hook-up. Trust me; it is no different from the straight people. It has been done for years peacefully. I am sure the older gays have different experiences to share.

Your readers may probably wonder my sexual preference is, whether I'm gay or bi or straight. I can only say I am only both emotionally and sexually attracted only to my current wife. What does that make me?

Internet Relay Chat (IRC)
In the nineties and early 2000s, internet connection was expensive and there weren’t social media sites and internet activities for the gay community to engage. But there was a popular medium called Internet Relay Chat or IRC which could be accessed with slow dial-ups. Then, there were popular IRC chat channels which many PLUs (People Like Us – a slang used referring tohomosexual) frequent such as #sgboy, #gam, #[email protected], #plu, #singapore. But these chat channels can only be accessed if you are on the Galaxynet IRC chat network.

There are 2 modes of communication in IRC, a public window where everyone in the channel could contribute their views or they could privately communicate with other IRC user in the same channel. In today's context, it is almost equivalent to Facebook Private Messanging. I remember clearly a typical private IRC conversation usually goes like this:

<quiet^guy18>: hi intro?
From experiences, we usually tend to look for their own race. If

Here is how a typical IRC Channel looks like now. But this is nothing compared to its heydays, when there was still a channel operator with the nick name "Q". 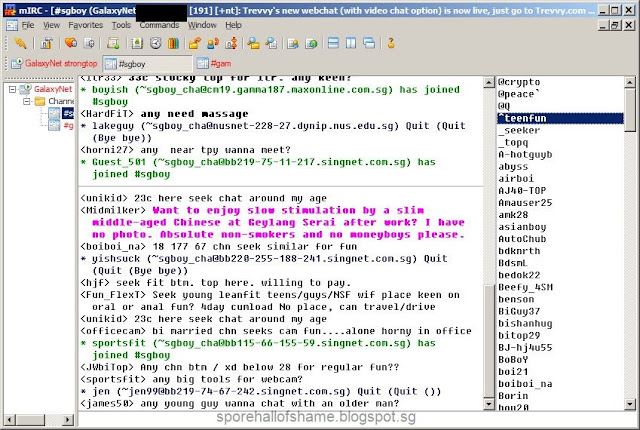 Rendezvous Spots
The usual rendezvous spot for the straights are applicable to gays – Handicapped toilets, multiple storey car parks, staircase landings, cars etc. But we have an additional advantage in the form of swimming pools. In the earlier days, open showers in swimming pools were common and it was a hunting ground to seek like-minded individuals. You may have seen men taking extended showers taking an effort to show you his intimate parts or walking around swimming pool toilets with erections. Being an avid swimmer in my secondary school days has exposed me to the many of such displays in swimming pools and a sensing called gardar to know whether the other males are gay, they enjoy staring at teenager boys taking their showers. 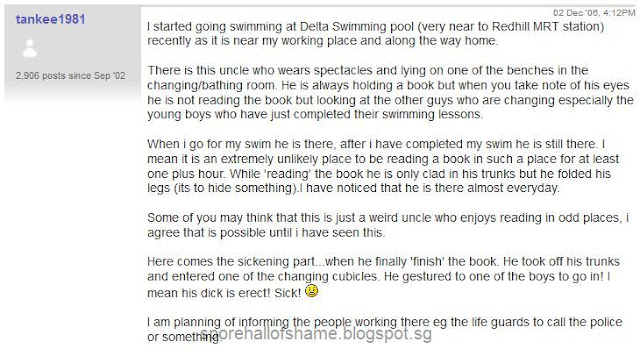 This is very common actually

Sometimes you noticed certain cubicles are locked for extended periods, be adventurous, peek underneath and you sometimes see more than a pair of legs within. I can assure you that the lifeguards are aware of the hanky panky that goes on in the showers but they will only take action if any member of the public complains.

I believe it is still common to see gay men roaming around in swimming pools showers to satisfy their gaze for younger flesh, despite that many swimming pools are upgraded with individual shower cubicles. Nonetheless, being a father now with a son heightens my concern for my son when he grows up. I advise all parents to tell their sons not to linger in swimming pool showers for extended period of time, better if they could just shower at home. 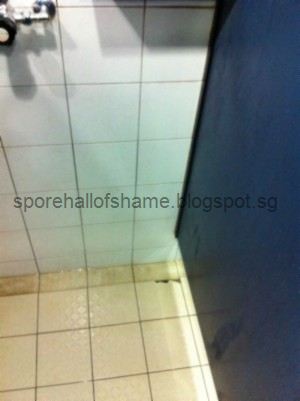 Saunas and Pubs
Gay saunas were common in the mid 2000s. They are not conventional saunas as you might think. These all-male saunas with extra facilities such as condom dispensers lube dispensers and dimly lighted rooms. It was a fertile ground for wild sex with the young and old, regardless of race and religion. Under low light condition, anything goes. Drugs commonly termed "Poppers" were often used in these wild sex parties which help to relax the body for the action that comes after. On paper there were age limits but in reality you will be able to some young faces which I suspect to be only secondary school going age. Some of these saunas had exciting theme nights such as underwear nights or nude nights. I am unable to share much what goes on in these low light rooms because the only thing we do inside is to fuck or get fucked or take anything into the mouth.

On Friday and Saturday nights, Maxwell road market becomes the congregation ground for most of the gay community in Singapore due to the proximity of gay friendly clubs around the area.

Gay Lingo and Fetishes
I have occasionally heard terms related to the gay community which I think are wrongly used. Here is a glossary of terms commonly used in the gay community:
Bears – Bears refers to big sized hairy guys
Bi – bisexual
Btm – It means "Bottom". It refers to the passive partner; or the "female" partner in a relationship. In sexual terms, the person who is on the receiving end.
Chubs – Chubs refers to the fat or obese gay. There are people who have sexual fetish for fat or obese men.
Cruising – To seek other gays in public places. May or may not be for the purpose of sex. Flex – It means can be either Top or Bottom, it means can be the active partner or passive partner. In sexual terms, he can do both ways.
Gaydar – It refers to the ability to sense whether a man is gay.
LTR – it means Long Term Relationship. It means to see stable committed relationships.
Peekhole – It refers to those pinhole-size holes commonly found in cubicle walls in male toilets and shower rooms.
Str8 – It refers to "straight".
Unif – It refers to "uniform". Uniform in this context can refer to School uniform, military uniform or overalls. There are those who are turned on by guys in uniforms.
Stock – Stock refers to guys who are big size, a bit of chubby but not fat.
Top – It refers to the active partner; or the "male" in a relationship. In sexual terms, the person is the one doing who fucks.
"What you into" – Ask the other party whether he has any sexual fetishes
"Intro" – In the IRC context, it seeks out the other party's age, height, weight and race. E.g: 20 170 60 Mly means the person is 20 years old, 170cm, 60 kg, Malay.
"Seek Older / Seek Younger" – As with straight people, they have preferences for older or younger partners. (My personal preference in the past is to seek guys who are same age or younger. I was never into older men. But there are those who seek out elderly gay men).

To sum it up…
I am not trying to put the gays in a bad picture. I am just sharing some of my experiences as a former gay Singaporean who is perplexed by some of the vocal gay minority who screamed foul and discrimination when they have all the rights to enjoy their life peacefully. Be it knowing more gay friends or engage in their sexual fetishes or seeking out long term gay partners, the gays are not singled out by anyone in public or persecuted by the authorities. Are these vocal gays making the silent gay majority look bad? If you are caught in public by the public engaging in blowjob, it is just too bad, why do it in public in the first place?

Some gay friends I know are in committed relationships – I know an older gay couple, who have been together for more than 7 years, although they have their quarrels and tiffs, they enjoy their lives doing community work, taking care of their dogs and the occasion overseas travels. What discrimination have they suffered? They asked. They have 2 HDB flats (with 1 rented out to collect passive income) and they have named their partners as beneficiaries for their CPF and insurance policies.

There are other stuffs going on in the gay community which I shall not go into, such as peek holes, glory-holes, exhibitism, blackmails, voyeurism, paedophilism, cruising, the use of sgboy.com, blowingwind.org, sugardaddies etc.

I admit, even when I am out on the streets with my wife and son, sometimes I sensed stares from other (gay) guys and I tend to return them a glance, sometimes with a secret grin; because I was once in their circle which is very small. Will I return to my old ways? Only time will tell. 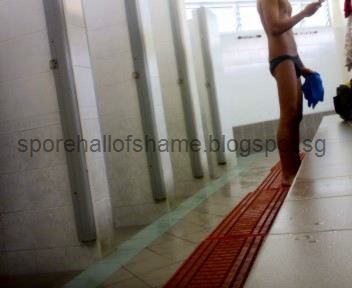 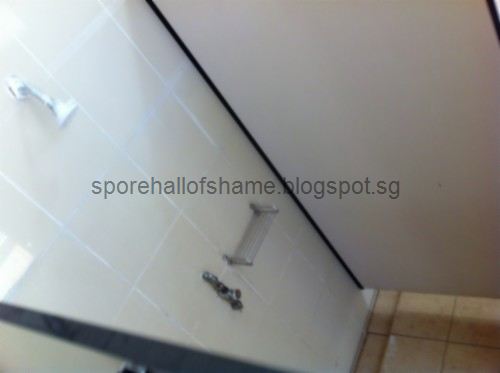 Good vantage point for a sneak peek at the hot guys?

LGBT Community: We Won’t Rest Until Section 377A Is Struck Down Completely!

Help, A Man Harassed My Husband and Wants To Meet Him in the Toilet!