SingTel fiasco: You pay or I block

Contrary to what Singtel claims, there is no misunderstanding.Singtel will not be charging their customers for the use of the free applications like Whatsapp, they will bill these companies instead. Which logically also mean these free applications will start charging the end-users. It is simple: whoever Singtel is going to charge, the money has to come from some where. The owners of these free applications are already doing the public a charity by making their services free, they are not going to incur losses just because some cheapskate telecom company in Singapore wants to make "sustainable" profit.Which Singtel customer honestly care if Singtel is missing out on revenue from SMS? Singtel is still sustainably profitable, they made $868 million in 2013 any way. The risk of being in the technology sector is that technologies get phased out very fast. SMS thrived for about 2 decades since 1990, their time is up. Network messaging has taken over now. Singtel is being a very sore loser trying to recover losses through regulations.Besides, on what basis does Singtel have the right to charge for these free applications? If Whatsapp don't pay, will Singtel block access to their servers? It is going down the same way as the television monopoly. Cable TV simply works by having service providers blocking off the frequency available through these "paid" channels. The logic is simple: You pay or I block. Technology has advanced that we no longer need to rely on centralized antenna, we could use portable cable decoder box. However, the Singapore regulators decided to ban all these alternatives. Do you know that owning a satellite dish in Singapore is illegal? It is as illegal as owning a radio in North Korea.

Singtel's proposal is a step backward for technology progress. They can earn few hundred millions more simply by pressurizing regulators, and they do not have to put in a single cent of investment from their side.The problem of the press statement lies with Singaporeans not convinced. It defeats the purpose of the "clarification", which just further ascertain that Singtel customers are going to pay more any way. 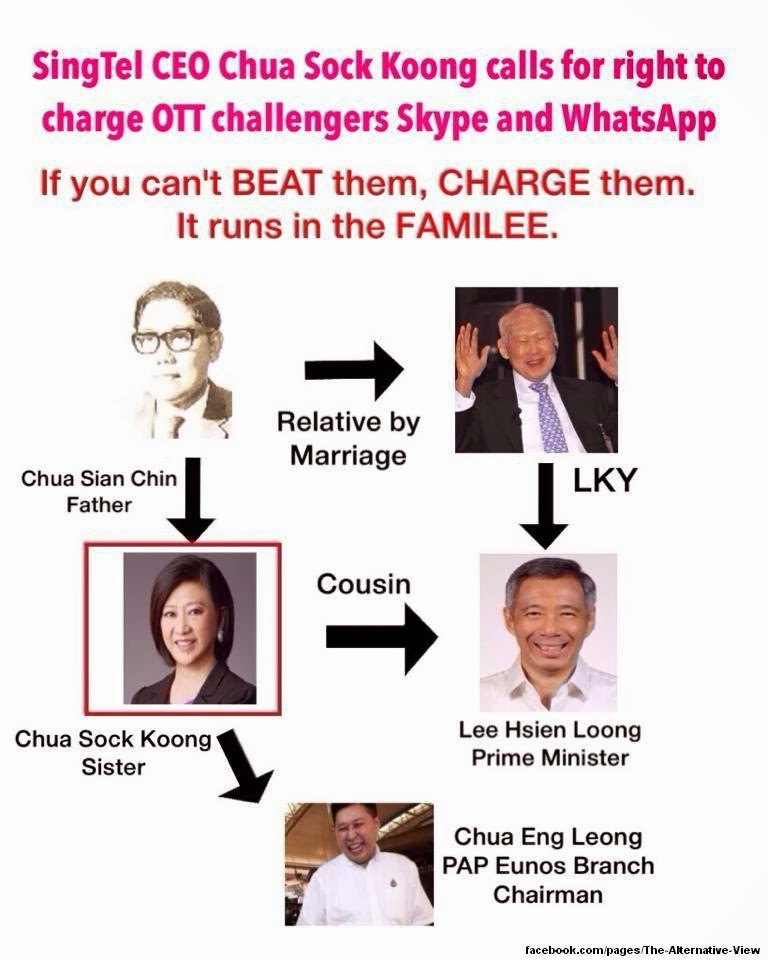 It begs the question who approved this stupid press statement, which is no better than the suicidal note SMRT made in the same week. It is very bad PR and the fault has to be undertaken by its CEO, Chua Sock Khoong. Oh her father happened to be a PAP Minister who have just passed away. I'm pretty sure she got her position through Meritocracy, the same way as the former CEO who is the brother of the Prime Minister.