Singapore's defence industry unveiled two new 5.56mm combat rifles at this week's Singapore Airshow 2014, including a weapon billed as the "shortest bullpup design in the world" (above, left).Developed by the weapons labs of Singapore Technologies Kinetics (STK), the bullpup rifle bears a superficial resemblance to STK's SAR-21 5.56mm assault rifle. However, the firing mechanism and front ejection for spent cartridges suggests that the SAR-21 – the standard infantry weapon fielded by the Singapore Armed Forces (SAF) – underwent a major engineering redesign to transform it into the new weapon.An STK statement said:"Giving infantry soldiers maximum lethality in urban operations, ST Kinetics’ new combat rifles are designed for compactness, minimum weight and full ambidextrous operations in a highly configurable multirole package. "The STK BMCR (Bullpup Multirole Combat Rifle) and STK CMCR (Conventional Multirole Combat Rifle) possess multirole flexibility for assault, marksman/sharpshooter and suppressive roles, putting the infantry section ahead in lethality and in achieving their mission objectives. Both rifles are designed to fire NATO SS109 5.56mm ammunition and ST Kinetics’ Extended Range 5.56mm ammunition, and come standard with MIL-STD-1913 Picatinny Rails at the three, six, nine and 12 o’clock positions. "The STK BMCR is designed to be the shortest bullpup-design in the world, to afford easy handling by the soldier even in tight spaces. The STK CMCR, meanwhile, is designed with a unique buttstock design that allows the rifle to be folded and adjusted for maximum compactness during use."The standard SAR-21 measures 805mm in length while the cutdown SAR-21 Modular Mounting System is a more compact 680mm from muzzle to butt. STK literature did not reveal vital statistics for  the BMCR, apart from the unsubstantiated claim that the rifle is the shortest bullpup design in the world.A major omission on the part of this blog was leaving the tape measure at home. At past shows, measurements done in situ have tended to elicit strange looks from duty personnel and generate conspiratorial whispers. So we decided to behave like normal air show guests and the end result is a half-baked report like this one which leaves us unable to provide greater clarity to ST'K's  news release.[Fear not. At the next show/SAF open house, out comes the measuring tape, vernier callipers etc]What we can show – thanks to obliging STK duty personnel – is the odd strange finger trapdifferent arrangement to check the BMCR's chamber vis-à-vis the SAR-21 (see below). A catch on the left side of the butt stock is depressed to slide a cover plate back towards the firer. This reveals the rifle bolt and firing mechanism contained within. The gap is somewhat larger than the one on the SAR-21 which the firer checks to ensure the chamber is clear of cartridges. One wonders if this design feature, which resembles the sliding plate on old sewing machines, may end up as a dirt trap should the firer need to slide open the cover plate in the field.Cover plate slides back to reveal firing mechanism 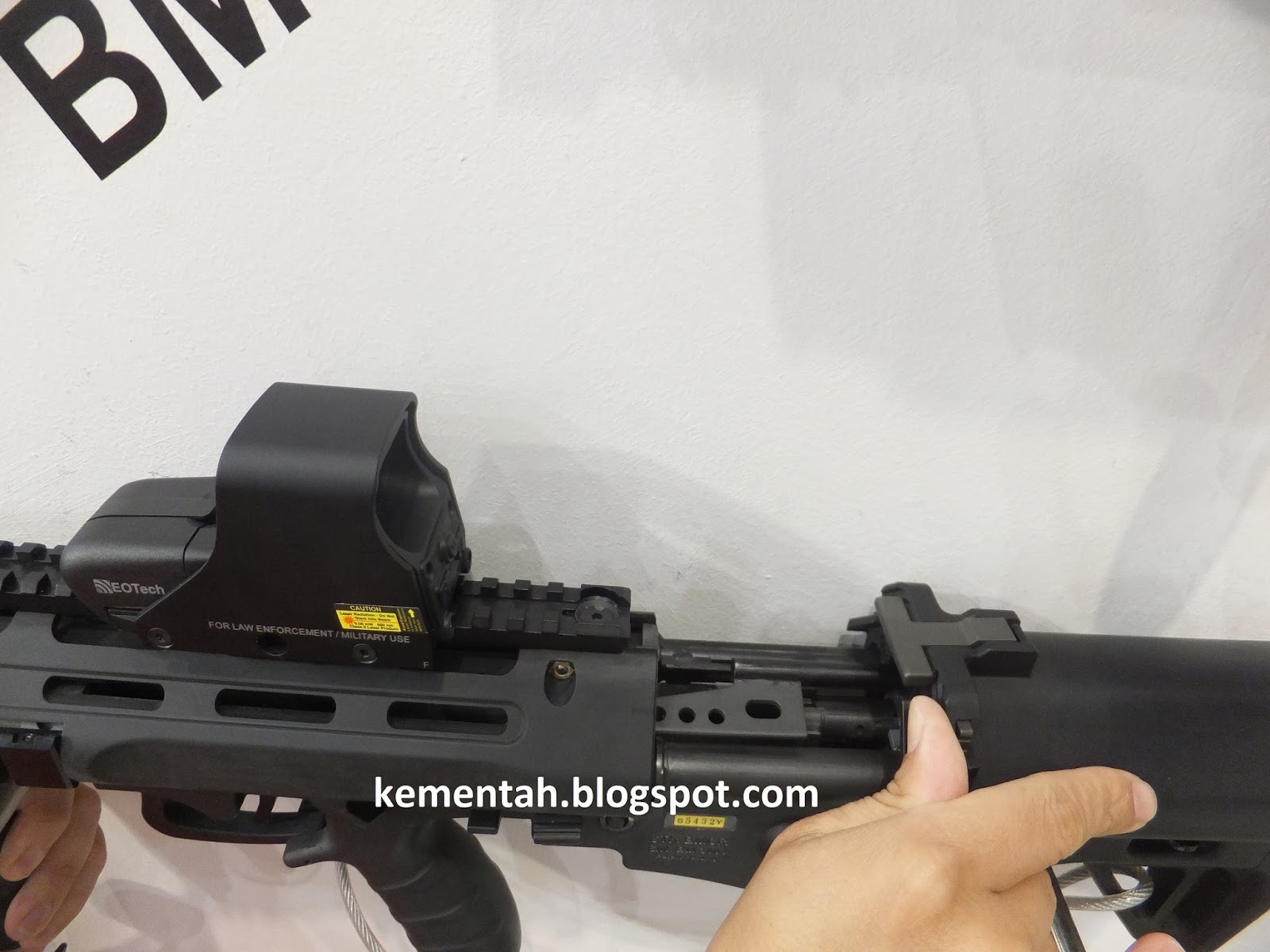 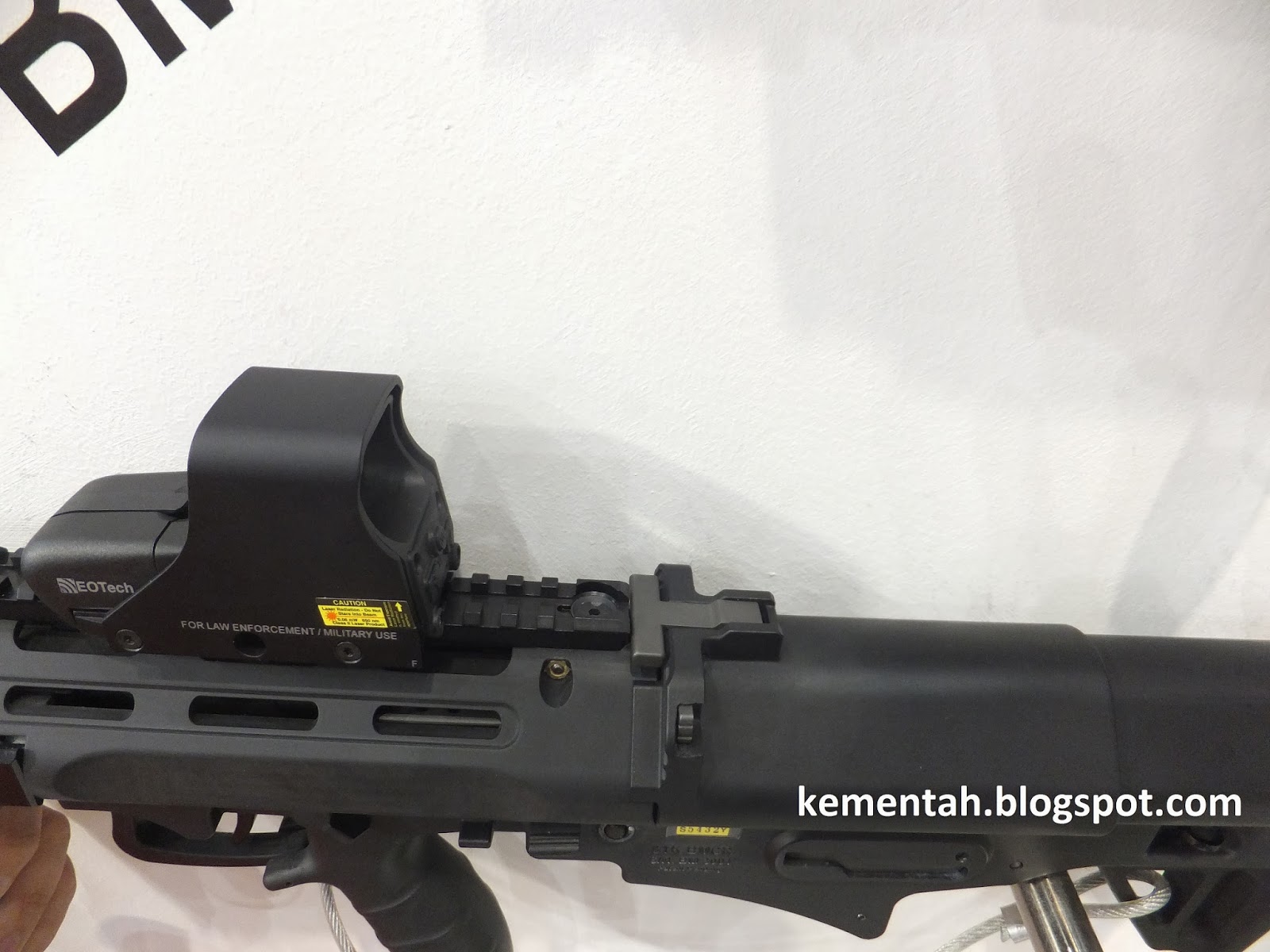 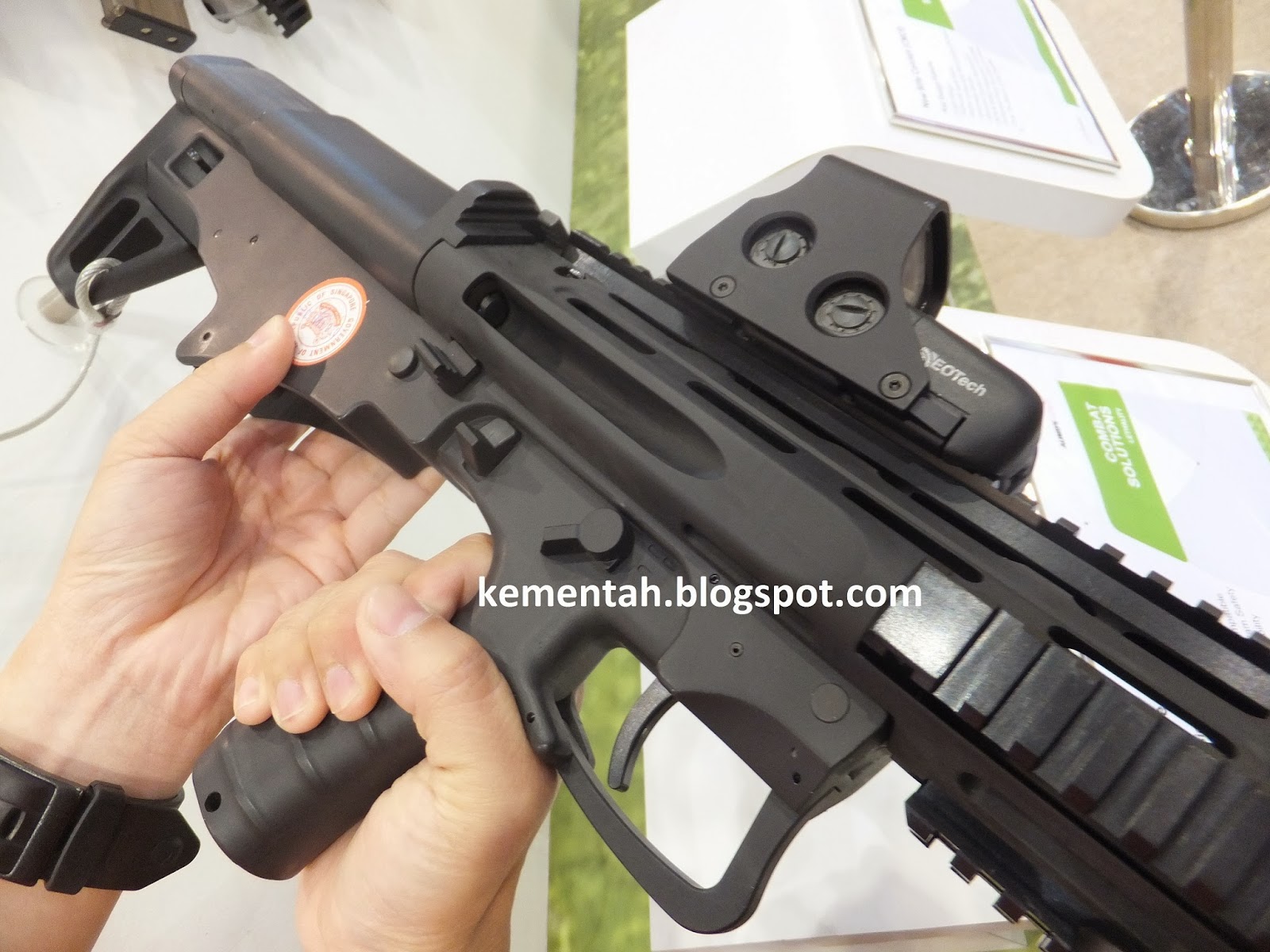 The BMCR ejects spent casings from the right hand side of the weapon. No deflector is needed for left-handed users as the trajectory of the cartridges traces a downward arc to the front aspect of the rifle, which means hot bullet casings are flung well clear of the firer's face.The BMCR is designed to be fully ambidextrous, with firing selectors on both sides of the weapon and a magazine catch that provides easy accessibility to both left and right-handed users.Senang Diri understands that forward ejection was preferred over downward ejection (as in the P90) to minimise the fall risk posed by empty cartridges littering the area around the firer's feet during urban firefights.A possible downside seen from the ops side of the house is the possibility that the firer's position may be betrayed during urban ops by the stream of shiny bullet casings flying out of a window. It is understood that a bag to catch spent cartridge casings can be added to the BMCR to mitigate such risks.Details on the CMCR are sparse. The weapon on show at SA 2014 was a non-firing 1:1 scale concept model.