HISTORY OF FAST FOOD IN SINGAPORE

They are widely criticised as unhealthy junk food, but many of us cannot live without them. Love ‘em or hate ‘em, you cannot deny fast food culture is firmly a part of our life now. Here is a brief history of how fast food conquered Singapore.

A&W (Alan and Wright) was the first ever American fast food chain to operate business in Singapore. It was 1966, a year after the independence of our nation, when A&W launched their business at Dunearn Road.

The chain expanded fast, and arguably hit its peak in the early nineties, before declining due to fierce competitions from rival fast food chains which arrived at Singapore at a later time. Its branch at Singapore Zoo was closed in 1999; by 2002, A&W had only 7 outlets here. A year later, its Singapore operation finally ended after it shut down its last outlet at Hougang Heartland Mall.

Curly fries and root beer float in frosted mugs are distant memories now, and so were the once-popular A&W restaurants at Ang Mo Kio and Bukit Merah centrals.

Kentucky Fried Chicken (KFC) arrived at Singapore in 1977 with its very first restaurant at Somerset Road.

Currently operating almost 70 outlets in Singapore, the finger-lickin’ good chicken has charmed many Singaporeans for more than 30 years. 1988 and 1993 marked the important years for KFC Singapore as they launched their signature burgers in Colonel Burger and the popular Zinger.

In the late eighties, KFC restaurants, such as the evergreen branch at Thomson Plaza, served their meals with metal knifes and forks. The drinks were refillable too.

Kentucky Fried Chicken rebranded itself worldwide as KFC in 1991, not because of the rumoured mutated chicken, but rather the word “Fried” did not go well with the increasingly health-conscious consumers.

On 27th October 1979, fast food giant McDonald’s became the third American fast food chain to venture into Singapore. It broke the world record on its very first day of opening at Liat Towers, Orchard Road, when it served the most burgers in a single day (the record was broken by McDonald’s Beijing in the nineties). In May 1984, McDonald’s opened its first HDB neighbourhood outlet at Hougang, and in 1996, it became the first fast food restaurant to operate in a community centre, at Hong Kah CC.

As the most popular and successful fast food chain in Singapore, McDonald’s has over 120 outlets all over the island, with 18 of them going 24-hour operation since 2005.

McDonald’s highly successful marketing strategy has charmed Singaporeans over the decades. Since its introduction of collectable figurines for the promotion of its Happy Meals and Extra Value Meals in 1995, phenomenon sightings started to appear in many parts of the island as Singaporeans rushed to queue for the collectibles.

101 dalmatians, Snoopy, Pooh and Friends were big hits, but the Hello Kitty craze in 2000 truly dominated the headlines, both for the right and wrong reasons. During the 40-day promotion, hundreds of thousands of Singaporeans queued up for the soft toys in the first two days. Fist fights, shattered glass door due to over-congestion and even rioting happened in various outlets, resulting in dozens being arrested. In the end, McDonald’s sold 2.8 million toys, a record remains till this day, and queuing officially became the favourite past-time of Singaporeans.

The crave for pizzas and pastas began when Pizza Hut started operating at Jalan Jelita, Holland Road as early as 1981. Since then, it has grown to become the largest pizza chain restaurant today with 48 outlets. Pizza Hut’s success is also due to its concept of making home deliveries, which began in 1986.

Under franchise agreements, Burger King landed in Singapore in 1982 with its first restaurant at Peninsula Plaza. Singapore was the second stop of Burger King’s expansion into Asia; the first being Hong Kong in the late seventies.

In 1983, fried seafood specialist Long John Silver’s was the next to arrive, eager to share the local market pie which proved to be successful ventures by A&W, McDonald’s and KFC. In the same year, French-styled bakery Délifrance made its debut here, but started with only wholesale catering for hotels, supermarkets and clubs. It was not until 1985 when it launched its first Café bakery at Clifford Centre, Raffles Place, followed by its first Le Bristo at Robinson Towers in 1989.

Milano’s Pizza, operating by franchisee, opened here in 1984 in a bid to compete with Pizza Hut. It never had considerable success, outmuscled by its rival Pizza Hut in the marketing arena. By mid-nineties, the pizza chain could not survive and some of its outlets were closed down, whereas the remaining were acquired by another rival Domino’s Pizza.

Wendy’s (Old Fashioned Hamburgers), another American burger chain, also established its foothold in Singapore in the eighties, having outlets in Far East Plaza (picture below) and Parkway Parade. It exited the local market years later but the franchise has since been brought back to Singapore by the Kopitiam Group in 2009.

Old school American fast food restaurant-cum-entertainment center Chuck E Cheesewas a popular hangout for many at Parkway Parade in the eighties. Children could play various games at the Fantasy Playland after having their fast food treats.

A couple of fast food chains, like Wendy’s, have exited Singapore and are able to make a comeback here, such as Domino’s Pizza, Dunkin’ Donutsand Texas Fried Chicken. But many others did not survive due to the intense competition or

Taco Bell has its operation here for a couple of years, mainly as combination stores with KFC, with its most prominent one at the Funan Digital Life Mall. However, it exited Singapore in 2008, as Mexican food such as nachos and tacos did not make their ways onto Singaporeans’ favourite food list.

American sandwich giantSubway made their venture in Singapore in 1996 with their first outlet at Lau Pa Sat. Having expanded to some 90 stores islandwide, its concept of healthy and customised variation of sandwiches has gained popularity among the locals.

Another fast food chain worth mentioning is Singapore-based Komala’s Restaurants, which serves Indian vegetarian food in fast food self-service setting. It was founded by Murugiah Rajoo way back in 1947, and has enjoyed reasonable success for more than 50 years, operating as many as 10 outlets in various parts of Singapore. It also has five overseas branches in Canada, Thailand and India. 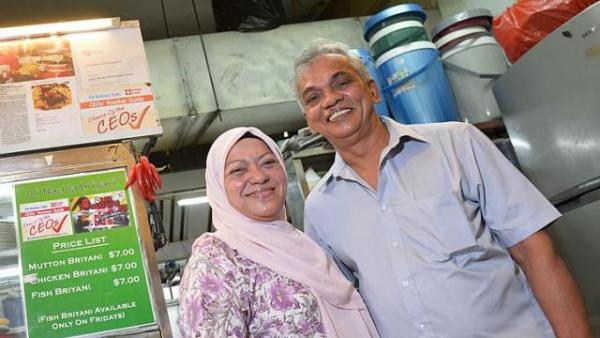