We found a little treat recently, the Sengkang Swimming Complex, at 57 Anchorvale Road and it features EIGHT waterslides. We were going to head to another swimming complex closer to where we live, but I needed something further afield to give my loves a nap in the car on the way home, and that is how we ended up there.

This complex is great. Eight waterslides – I mean how can the little munchkins not be happy with that? I’ll tell you how – for six of the big slides, you have to be five years old AND 1.2 meters tall. Both of my lads did not fit the requirements, and surprisingly, took it in their stride. I really did expect a fight, but they were very cool – phew. They would have loved it though. So be prepared if you go there with little kids. With that said there is a kid’s pool – and it’s huge – featuring two waterslides and lots of other treats, which kept my boys happy for a good hour and a half. The rest of the complex includes an open air 50 metre pool, an undercover 50 meter pool, a mega-spa, and some training pools.

The bad thing about this complex – rules. It’s a public pool and there were lots of lifeguards the day we went – it was a Saturday and New Year’s Eve after all – so they were pretty on the ball with laying down the law and making sure all followed. Both of my lads are great swimmers, and this is often a big surprise in these parts. The lifeguards took umbrage to a three year old and five year old swimming across the 50 metre pools, and they also weren’t happy when they swam in the gigantic spa. I find dealing with intensive rules difficult with my two adventurous lads, but they had an awesome time, so no big deal. The other great thing about Sengkang is it’s a local pool, so not your typical tourist trap and it’s cheap – $1/adult and 50 cents for kids – and this is peak hour pricing. It’s even cheaper during the week.

I expected we would spend longer at the pool, but because the boys couldn’t go on the big slides, and were shooed out of most other areas, we decided to make a run for it after two hours. It was enough. As with most kid entertainments in Singapore, the food options are junk food (McDonalds in this case,) so we walked out front, turned left at the road, walked down to the river and had our pre-packed healthy lunch by the water.

This adventure wasn’t over. Right next to the pools is a beautiful natural treat –Sengkang Floating Wetland – and while manmade, it’s really beautiful. I encourage you to walk across the floating bridge, where you’ll see birds galore, turtles, fish, butterflies and more. We were all delighted to see a monitor lizard swimming across the water. In the middle of the bridge, you can sit and enjoy the peace – there’s a little bit of shade – and the kids can climb over the giant orange slices, or poke eyes or hands through holes in the giant Mangostene (pictured) but it sure was hot and steamy inside. In fact, this area would be best explored early morning or late afternoon. We went around 1pm and it was steamy.

All up, it was about a 3-4 hour physical activity for my lads and by the end they were exhausted. If you need to go longer and harder, take scooters and bikes, because there are paths and park connectors everywhere and you could certainly fill in some decent time exploring this area. 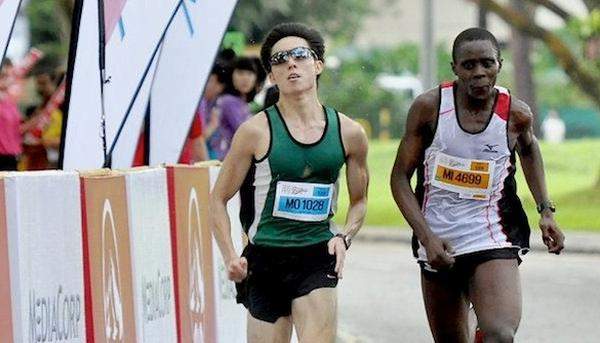 SG MARATHONER INSISTS ATHLETES MUST HAVE CHANCE TO PROMOTE OWN SPONSORS