What better day to make a trek to the site of Syonan Jinja than National Day! Syonan Jinja was a former Shinto shrine in the middle of the MacRitchie Reservoir forest. It was built by the Japanese Imperial Army during the Japanese Occupation of Singapore in World War II. When the British forces re-occupied Singapore, the Shrine was destroyed. It is such an interesting piece of history, we thought we had to see it for ourselves. And so, our journey into the jungle began… 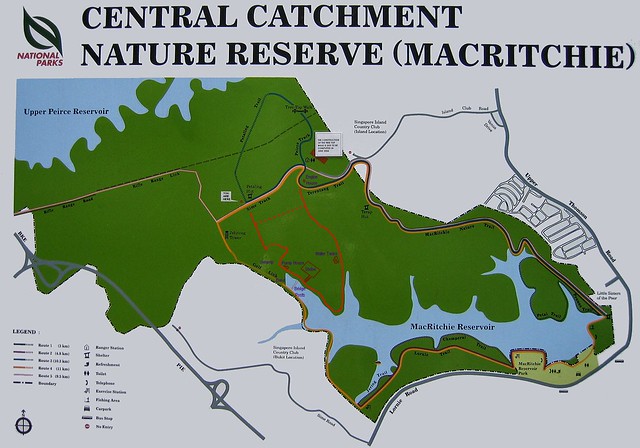 The Syonan (Shonan) Shinto Shrine or Syonan Jinja, was built by British prisoners-of-war and the Japanese Army off Adam Road inside the MacRitchie Reservoir area. It was officially unveiled on 10 September 1942. However, the Shrine was demolished immediately after the Japanese surrender with the return of the British forces in 1945. Only remnants of a font and foundation remain. In September 2002, the National Heritage Board marked the shrine’s location as a historic site. 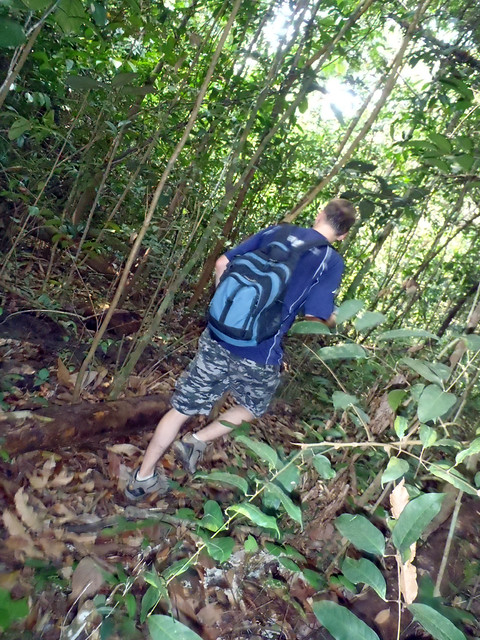 We started off from Rifle Range Road and headed to the Terentang Trail. The entrance to the path is marked by three big rocks and we ventured into the unmarked trail. The views along the way were spectacular as we emerged from the foliage and walked along the water’s edge. 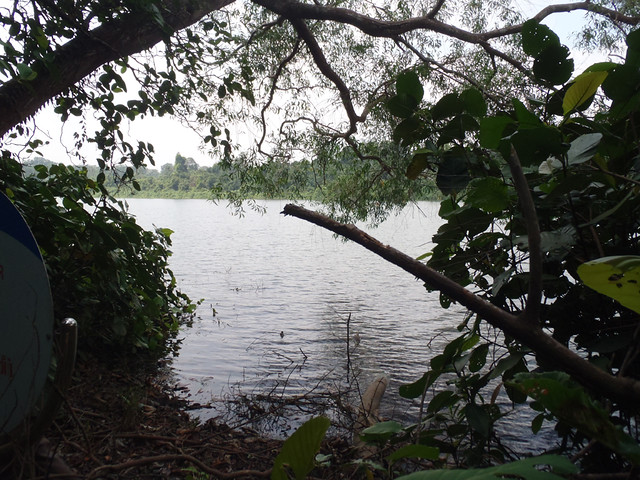 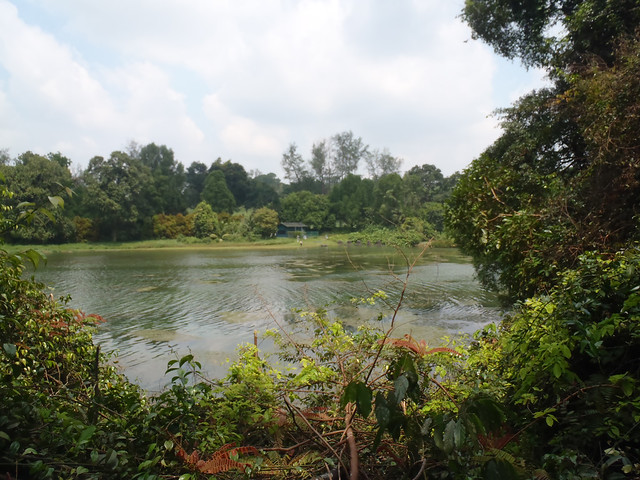 We knew we were on the right track when we spotted the derelict Water Tank on the way to the Shinto Shrine. At least I assume that’s what it is. we stopped to expolore the structure and take some photos. Just beside the building are what looked like wells, and inside the structure, you can see some sealed off pipes. 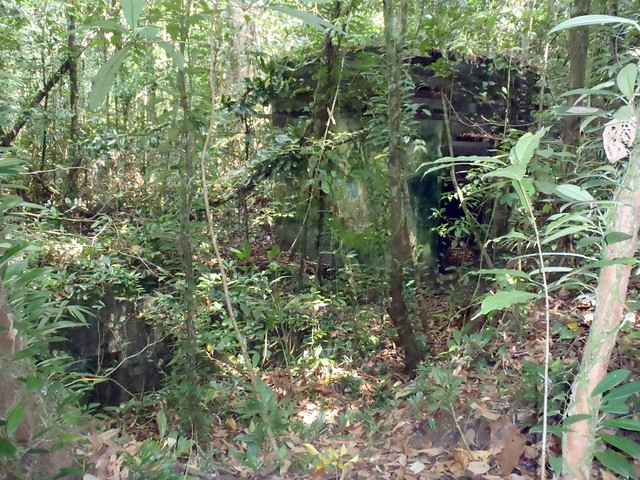 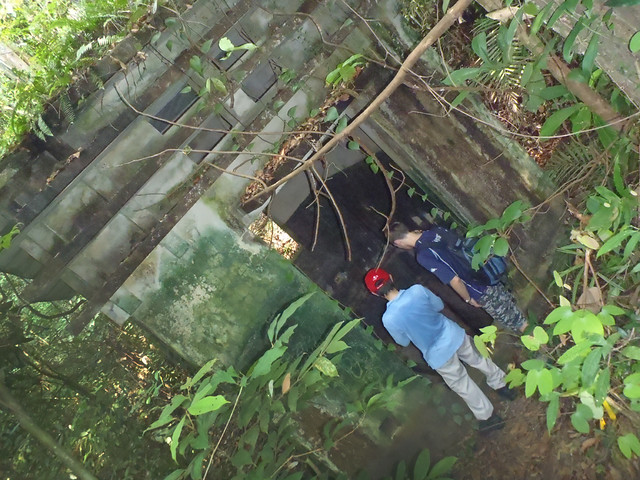 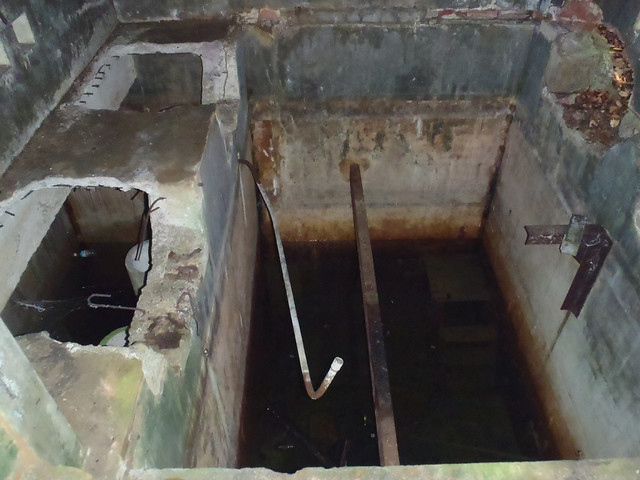 We continued our journey along the trail and soon found the stairs up to the shrine. However, only ruins of the shrine remain. They serve as a quaint piece of History accessible only to those willing to look for it, given its obscure location. Aparently, the National Heritage Board declared the site a Historic Site in 2002, although no plans have been made public to develop or to protect the site. 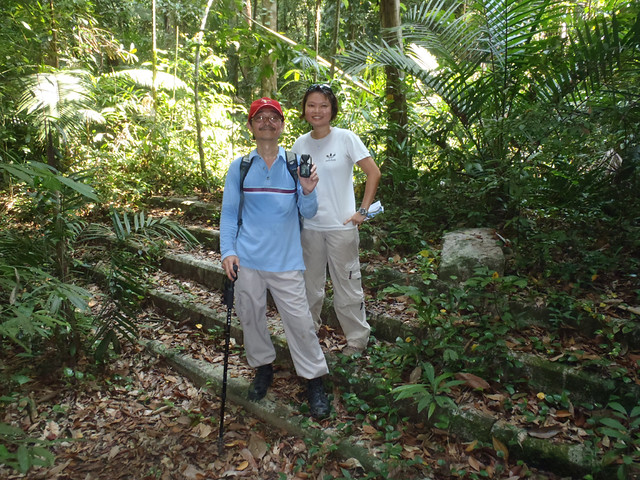 The sando is a pathway leading from outside the shrine compound to the front of a structure for worshippers. The sando functions as more than a path for circulation; it is also a religious composition, preparing the minds of people for sacred worship. A sando is usually lined with an avenue of trees or otherwise marked in order to be distinguished from regular pathways. At the end of the sando, somewhere close by you will find a water basin with bamboo dippers. 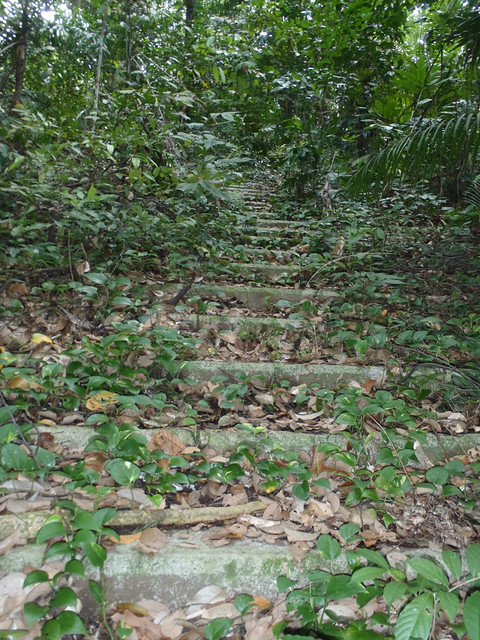 The original structure was a temple with no walls. Raised from the ground by a stone platform graduated with a few steps, the sloping temple roof rested on pillars that stood at regular intervals round the perimeter of the platform. The water of these fountains is used for purification. You are supposed to clean your hands and mouth before approaching the main hall. It is believed that during rituals, worshippers would drink from a huge granite ceremonial fountain located outside the shrine. 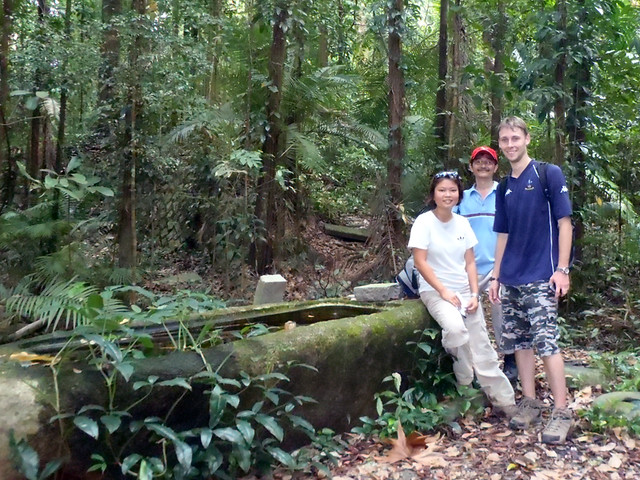 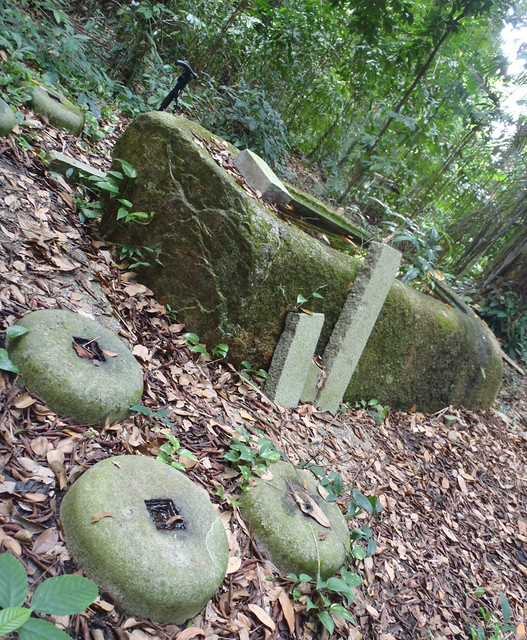 We took a walk along the perimeter and guess what we found? A geocache. Okay, we already knew of the placement of this cache and it was extra motivation for us to make this long trek here. It’s one of the last caches in Singapore that we haven’t found and Michael, Scott, and I were thrilled to have found it so easily. we signed the log and replaced it before continuing our exploration of the shrine remains. 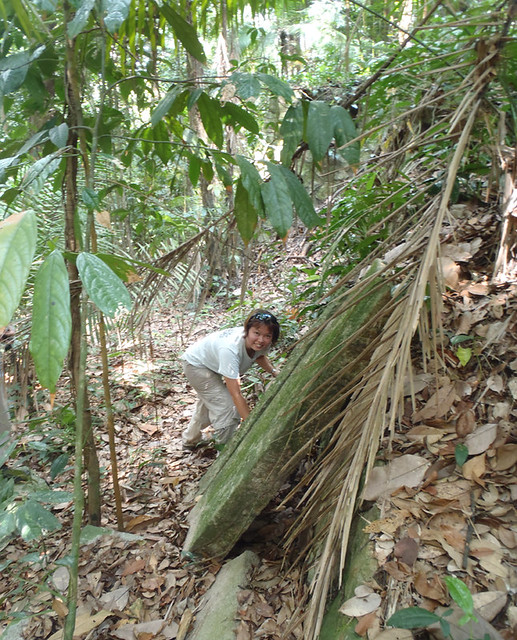 When we had our fill of the shrine remains, we went back down the stairs and headed to the Pump House. Directly beside the “Pump House” is what looks like a water tank. 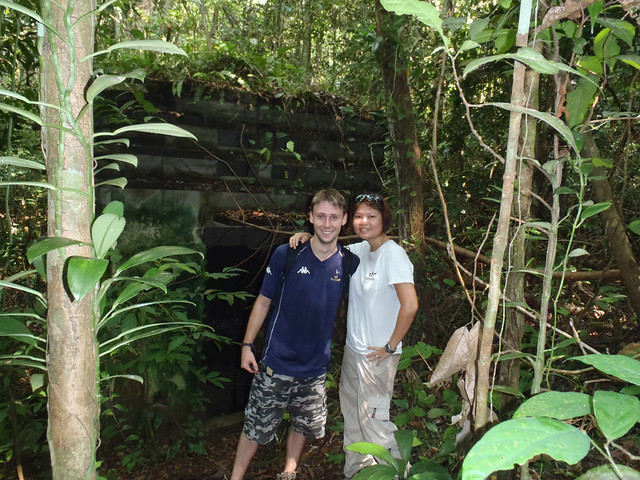 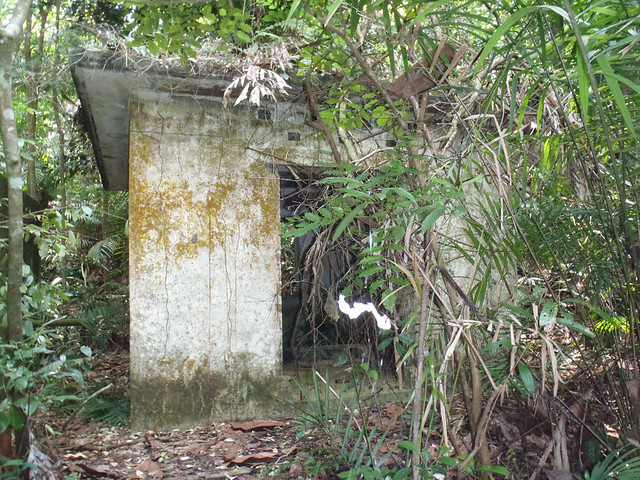 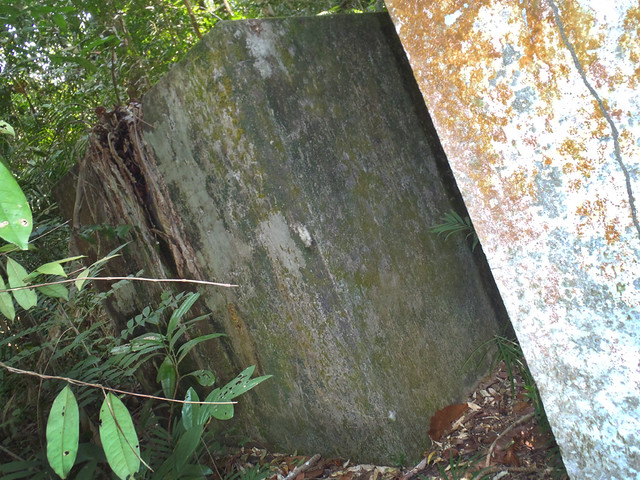 According to our homework and maps, there are three ways out. The first being the water crossing. It is the shortest route and would take us straight out to Golf Link. The view from here is beautiful and we got a little trigger happy. We walked along a little peninsula to find that we couldn’t cross the last 10 metres or so of water as we were not prepared to take a swim with the crocodiles. So we headed back. 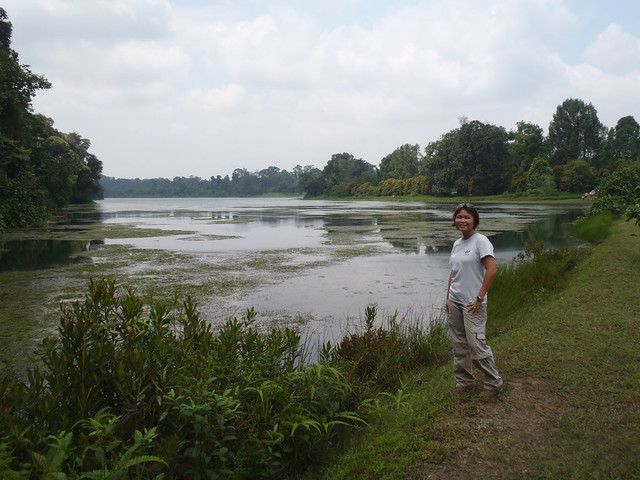 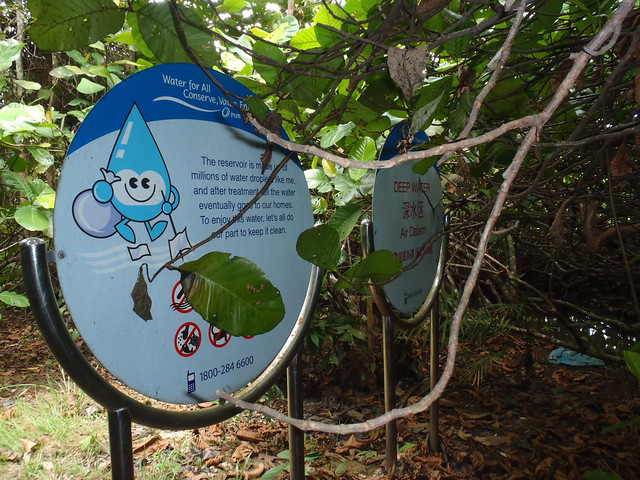 The second way out was via a dense throny jungle, so we opted to backtrack and return via the same way we entered where there was a trail all the way to the Ranger Station. All-in-all a great morning out and one of the most fun-filled treks we’ve done in Singapore. And yes, we will definately be back again for round two! 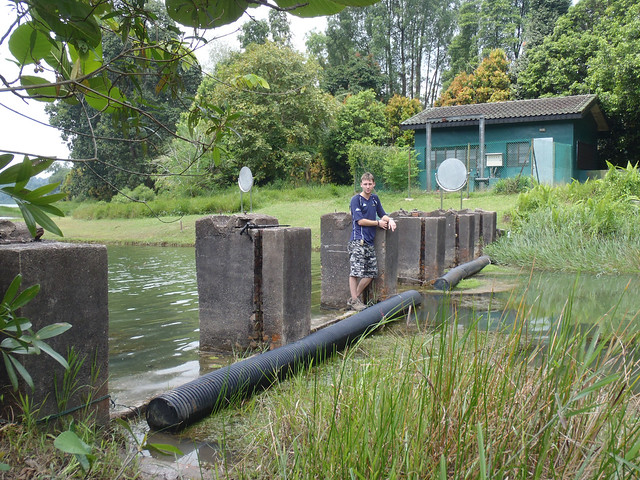 The shrine’s design was based on the famed Yasukuni Shrine in Japan. The Yasukuni Shrine dates back to 1869 and has been the resting place for more than 2.466 million Japanese soldiers who died for their country, serving as a national symbol to remember those who died in both World Wars. Reflecting its design, the Shinto shrine was a 12 m-high cylindrical wooden pylon, its peak tipped with a brass cone. At the base of the pylon, in a small shed-like shrine were the remains of the fallen Japanese. In front of the monument was a font which visitors would take a sip from using a long-handled ladle. Shinto meaning “the way of the gods” is the native faith of the Japanese and is primarily pantheistic. It is necessary to cleanse oneself before approaching a Shinto Shrine for prayers, thus the provision of the font. A Japanese bridge was built across an arm of the reservoir to bring visitors to the secluded Shrine hidden behind the trees. The Shinto followers believe that “divine spirits” or kami reside in nature and thus the location of the Syonan Shinto Shrine in the midst of the forest. 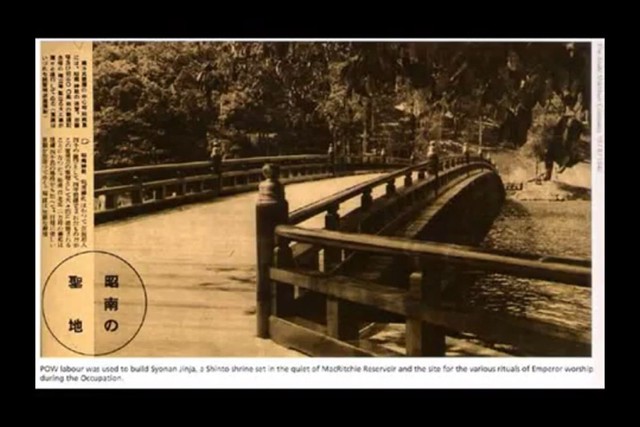 After the fall of Singapore, General Yamashita in the subsequent months sought to build a memorial for the Japanese troops who had died during the Malayan campaign. British prisoners-of-war interned in the Changi Gaol and troops of the Japanese Army worked together to construct the Shinto Shrine, Syonan Jinja, at MacRitchie Reservoir which stood near the centre of the heat of battle for Singapore. Work on the construction of the shrine had begun as early as April 1942, at the west end of the forest that surrounded MacRitchie Reservoir. The site of the Shrine necessitated the felling of a remarkable patch of original, primeval forest, a great loss to the botanical world.

Halfway through the construction, a Colonel in the Japanese Army suggested a parallel shrine be built for the Allies. With Yamashita’s concession, Australian troops were recruited to build the Allied Cross which stood behind the Shinto Shrine. On 10 September 1942, both monuments were unveiled. The Japanese had also built another shrine, the Syonan Chureito off Jalan Sesuai at Bukit Batok. 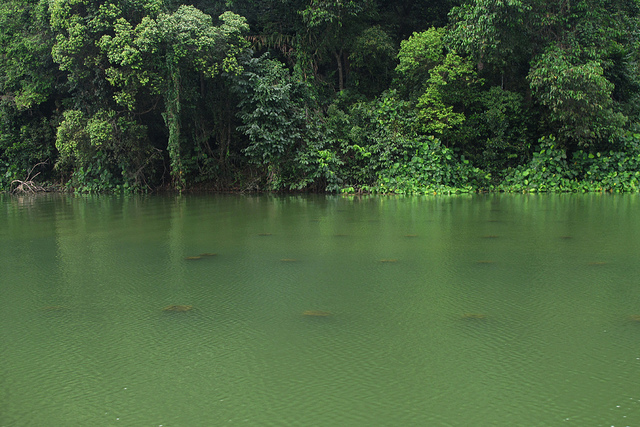 Remains of the bridge

Plans to rebuild the memorials to remember both the Japanese and Allied fallen were discussed in the 1990s but were shelved in 1991 because of sensitivities toward those who had suffered under the Japanese. Today, a transmitting tower stands at the site of the original monuments. On 9 July 1995, a plaque was unveiled by MP Ong Chit Chung at the Bukit Batok Nature Park as a memorial instead.

GE2020: This Election Is One Of The Most Polarising One In SG History

HISTORY OF STARING INCIDENTS ENDED WITH A MAN STABBING ANOTHER

STRUGGLING POLY STUDENT: MY PARENTS EXPECT ME TO DO BANKING, BUT MY PASSION IS HISTORY