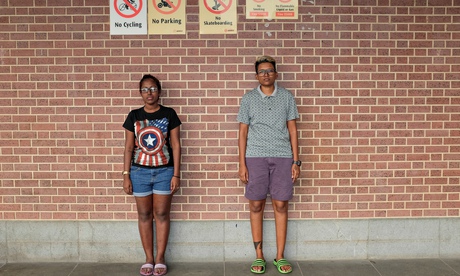 Patricia and Sham: 'Knowing how rich some people are in Singapore, I think we are poor.' Photograph: Marc Nair for the Guardian

It is a balmy Saturday afternoon in the suburbs of Singapore. Patricia, 21, and her partner Sham, 28, share their first meal of the day: a box of chicken nuggets at McDonald's. "It's getting much harder to survive in Singapore," Patricia says between bites. "I love my job, but my pay doesn't match up to the cost of living here. But what choice do I have?"

Patricia recently moved out of her parents' house to be with Sham. In Singapore, with its sky-high housing prices and conservative Asian values, most young people have no choice but to live with their parents until they get married. Singles cannot apply for public housing until they turn 35.

Patricia works full time as a nurse in a government hospital. She is undereducated by Singapore's standards, with only n-levels (below high school) and an ITE (technical college) certificate in nursing, and earns S$1,400 (£670) per month.

In a country where a small, two-room condominium unit in the city centre can fetch a monthly rental of S$5,000 or more, Patricia pays a pricy S$850 a month to rent a non air-conditioned room in a flat at Admiralty, a suburban area in the north of Singapore, a 90-minute commute by public transport to her workplace.

Her monthly rental does not entitle her to the use of her landlord's kitchen, so she has to eat out for all her meals. "Definitely life is hard, with the increasing costs in Singapore," Patricia says. "Somehow I buck up and struggle through these storms. Though I know I'm suffering inside, I still motivate and push myself to work harder."

A 2013 white paper on increasing Singapore's population to a recommended 6.9 million by 2030 made reference to nursing as a low-skilled job. After a public outcry, the note was amended and the national newspaper the Straits Times subsequently ran an article with the headline, "More nurses are now better qualified" [pdf].

Patricia, though, feels she's discriminated against by superiors who refuse to recommend her for further studies. "I care for the patients; I do love nursing," she says. "But my colleagues tell me, this job is all about passion. Even if it is, passion is paying me peanuts!" 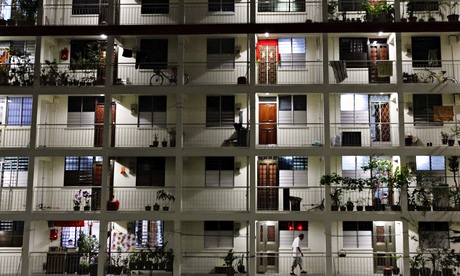 A man walks along the corridor of a public housing estate in the Katong area of Singapore, 2011. Photograph: Tim Chong/Reuters

Her late hours are exacerbated by a long and uncomfortable commute. "When I'm on back-to-back shifts, I'll reach home around midnight and have to leave by five in the morning to get to work. But I won't get a seat to rest in the train and moreover, when I'm in my nursing uniform, people expect me to give up my seat. Don't nurses have the right to sit down, too, or are we supposed to stand throughout our journey?"

Patricia's situation stands starkly against the case of Anton Casey, a British wealth manager who ignited the wrath of Singaporeans when he referred to public transport commuters as "poor people". He also posted a status update about washing "the stench of public transport off me" once he had gotten his Porsche back from the workshop. Despite apologising publicly, Casey and his family (he's married to a former Miss Singapore) were forced to leave the country and he was also fired.

In 2001, Singapore was ranked 97th in the list of world's most expensivecities. Ten years later, it was ranked sixth. Ongoing inflation means that basic amenities such as food continue to rise without an equivalent match in real wages.

According to Hui Weng Tat, associate professor at the Lee Kuan Yew School of Public Policy: "We have a large number of households who are earning income in the lower end and not having enough to cover their household expenditure, especially at the lower 20%."

This hits home hard for Patricia and Sham, who have to eke out a living on Patricia's salary alone. Singapore does not have a minimum wage, and Sham felt this most acutely when she was forced to work for S$900 a month doing essentially the same job (dog handling) that she used to get S$2,500 for at a different company.

This was a precipitating factor in causing Sham to seek employment elsewhere. But it seemed companies didn't take too kindly to a gay Indian girl with a penchant for dressing boyishly. She was rejected from numerous job interviews even before being seen. She says, not without irony, "Dogs don't discriminate against you".

A study by the National University of Singapore's (NUS) social-work department stated that "the working poor in Singapore … is defined as someone earning less than half of the average monthly income of a Singaporean, which now stands at S$3,000". The World Bank's poverty line is set at 50% of the country's mean income. 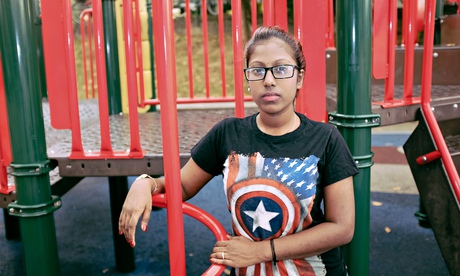 'They say nursing is about passion but passion is paying me peanuts.' Photograph: Marc Nair for the Guardian

But Singapore's minister for social and family development, Chan Chun Sing, has said the government doesn't want to define a poverty line in Singapore. The reason is to avoid a cliff effect, where families narrowly above the poverty line will not be privy to the subsidies and benefits offered to families below the line. "We don't feel poor because we have each other," says Patricia, looking at Sham, "but knowing how rich some people are in Singapore, I think we are poor".

In contrast, it's coming up roses for a growing upper class – 17% of Singapore's population has a net worth of over S$1m and more rich individuals are flocking here, drawn by the low corporate tax rate, no capital gains or estate tax, and a personal income tax capped at 20%.

When Patricia is asked what she would desire if money were no object, however, she replies immediately: "A flat of my own, a diploma, and for someone to give Sham a chance at a job." Simple things, yet indicative of a growing gap between a wealthy minority and the rest of the country.