6 TIPS TO CHOOSE A PRIMARY SCHOOL IN SINGAPORE

Something to bear in mind if you do want to consider putting your child in an 'elite' school. Would you rather your child be a big fish in a small pond or a small fish in a big pond? It's the reality in most schools whereby they allocate the best teachers to the top few classes in a bid to boost their top scorers. Also, we have heard of many stories whereby students fared averagely in an 'elite' primary school, but when they went to a heartland secondary school, they were placed in the top class and shined. Another very important point is that contrary to popular belief, teachers in heartland schools put in much more effort in teaching the students. They are aware that most of their students may not have tuition, and are very willing to give them extra help. In contrast, most kids in 'elite' schools have already learnt a lot of the material from their tutors, so much so that there is an incredulous refrain amongst parents of such schools that "the kids go to school more to be tested than to be taught". The classic chicken and egg situation.
4) The Principal
Who the principal is sets the tone of the school. If the principal has the welfare of the teachers and the students at heart, I'll say that is a great school to put your child in. Because where her priorities lie will filter down to every aspect of the school system. Is she concerned only about achieving academic success? Or is she passionate about making the school a vibrant environment for holistic learning? Is she very focused on chasing awards? Or is she keen on developing every child.
The MOE has done yet another round of rotating the principals. Hopefully, that has eased the pressure off entry into some very popular schools. And it is great that new life and expertise can be injected into heartland schools. So don't harp too much on what the school has done or achieved in the past, but have an open mind on what the school is currently doing, especially if it has a new principal to helm the school.

5) If you have a mix of girls and boys, consider choosing a mixed school

By watching my kids, I realised that there's a strong sense of bonding by going to the same school. Wearing the same school uniform, taking the same school bus, talking about the same teachers. During the holidays, they get the same charity drive cards, which is so much more fun and less intimidating to do together, and they even get the same homework. For example, on the first day of school, both #4 and #5 received the same worksheet whereby they had to draw and write some things about themselves. I have never seen #5 so eager to do homework before! They shared ideas, and the older one was proud to teach the younger one a better way of colouring and decorating the page. During our daily dinners, they also have so much to talk about that went on in school that day as they will be sharing with each other some exciting tidbit about their friends or teachers. It also makes everything easier for the younger sibling to adapt to. #1 used to take #2 home with her on the public bus after their CCAs when she was in P5 and the younger one was in P3. Then it was #2's turn to teach #3 to take the public bus home.

This point may be seen as trivia to some parents, and will probably not be one of the main criteria in choosing a school, but it could be a tie-breaker. The transition from kindergarten to primary 1 is significant, not only the extra hours spent at school, but work becomes more 'serious'. When I asked a lot of children in P1 from various schools if they liked school, I noticed something very telling. The kids who were happier tell me that they have fun with their friends during recess and before assembly in the mornings. The kids who tell me they dislike school or that school is boring usually come from schools whereby once they arrive in school, instead of going to the classrooms where they can mingle while waiting for the assembly bell to ring, they have to head straight to the hall for silent reading. And during recess, some schools have very restrictive rules, such as no playing in the field, no playing at the exercise equipment (in case accidents happen), and no staying upstairs in the classrooms. However in some schools, the kids are running around happily in the field, on the basketball court or even in the playground. Yes, some primary schools do have proper playgrounds for the kids to enjoy! 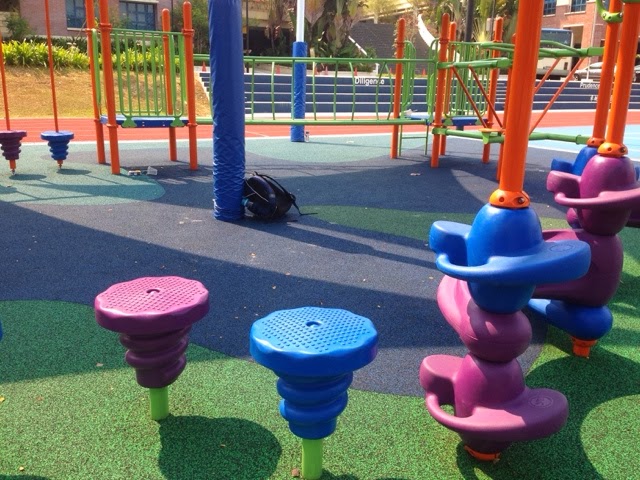 Another benefit of active play during recess is that the number of kids with ADHD or problems with focusing is rising. I think this can partly be attributed to the increased usage of gadgets coupled with a high intake of colouring and preservatives in our food. One way to alleviate it is to allow the kids to move and expand their energy during recess so that they can focus better.

Besides, after going to school for 6 years, I don't just expect my child to emerge with a certificate. I expect her to have formed many good friendships and memories which will perhaps last her through her lifetime. Don't we remember the good ol' days of playing zero point during recess? I think it was the highlight of our school day!

At the end of the day, whichever school your child gets into, the best thing you can do for your child is to partner the school. I made this mistake with my older kids. The hubs and I decided to put our kids in the nearest school to our house, which happened to be a SAP school. However, over the years, there were so many problems with the school. A lack of communication, no standardisation with the delivery of syllabus, and even getting untrained teachers for the whole year, just to name a few. I kept mentioning how disappointed I was with the school in front of the kids. I realised that I shouldn't have done that. I should either try to find a solution for things which I could, and for those that I could not, I should just live with it as it doesn't help the kids for me to mention all the negative things about the school.

If you are trying to get into a school which you feel is 'better', perhaps you should keep the plans to the adults. Because if the child gets the idea that you are trying to get into the 'better' school, but in the end failed and she has to go to the '2nd choice' school, who knows what the child might make of that? We all want them to start on a positive note, so you might want to keep the child in the dark, and when the results are out, then you tell the child which school she is going to and point out the pros of the school.

Sane tip: It doesn't matter what type of school it is. Look at each school as it is, without any biases, take a piece of paper, draw up the pros and cons of the 2 or 3 schools you have narrowed down, then make an informed and wise decision based on facts. There's a strange phenomenon in #3's school. Year after year, there is fierce balloting for places. People are fighting to get into her school as it has a good reputation for grades. Yet, after the kids enter the school, the parents have many dissatisfactions with the school and then they ask "What is so good about this school?" So don't just follow the crowd based on popular demand, but make an informed decision.

Save tip: Besides the obvious savings of cheaper school bus fares if you live nearer the school, or even free, if it is within walking distance, I also realised another thing. For the humbler heartland schools, your child will ask you for money less frequently. If you are in a school where there are more affluent families, your child will ask you for money for all sorts of things. It could be donations, expensive CCAs like sailing or golf, or subscription for magazines delivered via the school. Of course you are not obligated to join or buy any of it, but if everyone else is buying the magazines or if your child's best friend is participating in it, your child might keep insisting on it. So find a school which fits your requirements.

#4 is in an 'elite' school, and she tells me that she's the only one in class without a phone and most of her classmates have the latest iPhone 5. I told her that's great, she has so many friends to borrow a phone from in case she's ever in an emergency and needs to call me. And of course, before the year end school holidays, they will invariably chat about their holiday destinations. It's common to hear of Club med ski holidays, or even trips to the States or Europe. So just bear in mind that will be the peer environment your child will be exposed to.

I hope the above tips were useful, and for parents with kids already in the school system, if you have any other suggestions which might be helpful to other parents, do share with us via the comments!