In shopping around for airfare to get from Hong Kong to New Zealand, the most reasonably priced flights went through Singapore and Sydney, so we decided to do brief stopovers in those two places along the way. We had roughly 36 hours in Singapore. When we landed, we dropped our packs off at the hotel, then headed straight to the island of Pulau Ubin for a bike tour we had booked for that afternoon. Getting to the island required a short ferry ride from the edge of the city.

Although the island of Pulau Ubin is part of Singapore, we had heard that it was nothing like Singapore. We definitely found that to be true. When we arrived on the island, we had only three options for lunch: a small seafood restaurant, a small Chinese restaurant, or get something from the island’s only grocery store. Both restaurants were packed, and we did not have time to wait, so we headed to the grocery store. It turned out that the grocery store had just a handful of shelves and they were mostly full of processed food. So, our lunch ended up being a couple Cokes along with chips & peanuts from the store. Super healthy. At least we would spend the next four hours on bicycles. A real meal would have to wait until we were back in the city that night.

Obviously, people do not come to Pulau Ubin for the food. What they do come for is to tour the island by bike. I’m pretty sure that the number of bikes for rent outnumbered the population of this island.

the town – no shortage of bikes for rent

Our bike tour was with a company called Asian Detour and our guide, Fadil, was a local who grew up on the island. It was nice to have a local guide. What made it even better (besides the fact that we had a private tour), was that you could tell Fadil loved both biking and this island he was from.

Before we started the tour, Fadil told us that we would stop at a number of different places along the way, and that when we stopped, he would take pictures of us. He wasn’t lying. Thanks to Fadil not only serving as our guide, but also our personal photographer, we ended up with a lot of “couple shots” in Pulau Ubin. Normally, Jay & I do just one “couple shot” per day we travel (maybe 2 or 3 if I am lucky). But on this day, we had at least 10. I believe it will go down in the books as the most pictures we have taken together in a single day of traveling. Fadil got some good ones of us!

The scenery in Pulau Ubin is quite nice and the island has a relaxed feel. Nearly everyone gets around on foot or by bike. There are not many cars on the island, which makes it great for cycling. I believe we only got passed by a car once during the four hours. We spent the first half of the tour exploring the western side of the island.

had I known we’d be on single track, I wouldn’t have worn flip-flops 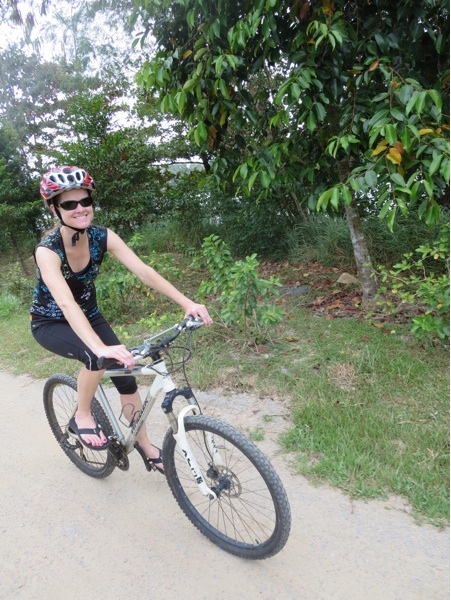 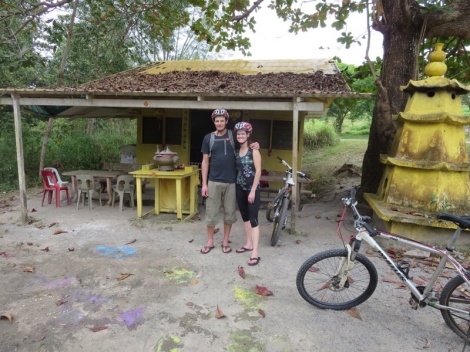 Our last stop on the west side of the island was to butterfly hill. We saw a number of butterflies there, but most impressive was the oriental pied hornbill we came across. It was sitting in a tree right over the path we were on. I rode right under it, my head inches from the branch it was on. Both Fadil and Jay were yelling, “look, look”! They had both spotted the bird above me, but I didn’t see it until it flew away to another tree nearby.

After we finished touring the west side of the island, we headed back into town for a short break and enjoyed some coconut water. 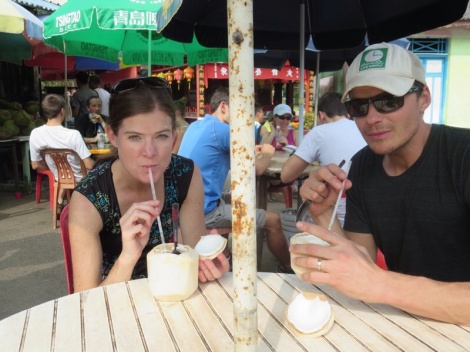 After the break, we toured the east side of the island. We passed by Fadil’s house and he invited us up to see it.

Just up the road from Fadil’s house, we came across a whole bunch of monkeys. At first, we just saw them in the road. But then, we realized they were all around us in the trees too. It seemed these monkeys had no fear of people. We hung around for a little while just watching them. We even got to see a momma monkey feeding her baby, which was pretty cute. 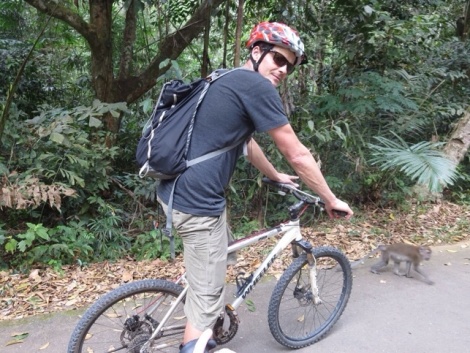 Next, we headed to the water where there was a tudor-style house from the 1930′s (built by the British) that had been converted into a visitor’s center. When we reached the water’s edge, we spotted a wild boar. It was a way’s off (thankfully), so we didn’t get the best picture of it.

wild boar we spotted from a distance 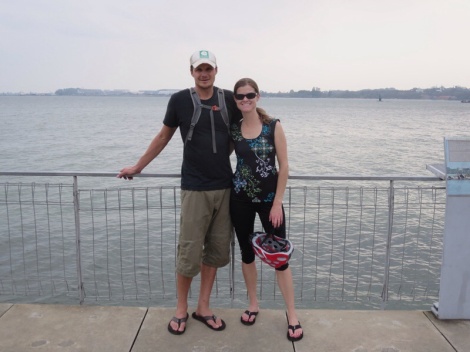 views of Malaysia from chek jawa

All in all, we had a great day! It felt good to be back on a bike!

last couple shot of the day

Ang Moh Mocks Security Guard, Then Hits One Punch That Floored The Guard