MARINA COASTAL EXPRESSWAY (MCE) IS SMOOTH – BUT WHAT ABOUT OTHER EXPRESSWAYS? 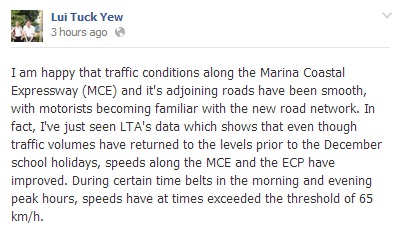 Lui Tuck Yew: I am happy that traffic conditions along the Marina Coastal Expressway (MCE) and it's adjoining roads have been smooth, with motorists becoming familiar with the new road network. In fact, I've just seen LTA's data which shows that even though traffic volumes have returned to the levels prior to the December school holidays, speeds along the MCE and the ECP have improved. During certain time belts in the morning and evening peak hours, speeds have at times exceeded the threshold of 65 km/h.

Sharon Yeo: Dont juz talk abt MCE. It may be smooth due to higher traffic diverted to other expressways. Pls share the traffic conditions across all expressways, comparing MCE, ECP, KPE, CTE, AYE during peak hours. This would be a better justification than juz talk on MCE. It is not convincing in yr statement.