Understanding why PSLE needs to be changed…

Recently, OCBC granted a special PLSE leave plan for its staff:"Now, anyone working for OCBC Bank or its subsidiaries can squirrel away up to 15 days' leave and carry it forward to the next year so that they can stay home to help their child study for the Primary School Leaving Examination (PSLE)."[Link]Here is what Minister Josephine Teo wrote in her Facebook: 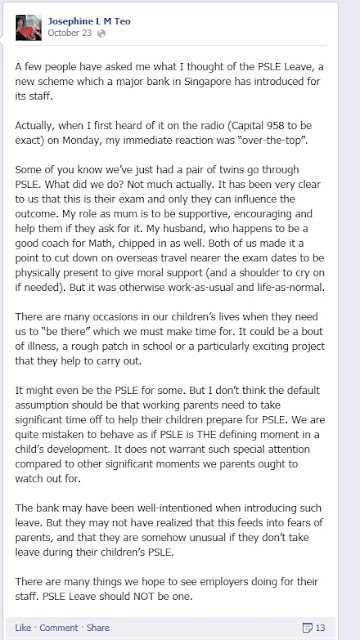 Minister Teo was badly criticised for what she said. The main issue with her remarks is she tried to apply her own situation to everyone. What her twins need to perform reasonably well may not be what is needed for other children and parents. Many parents were unhappy with her saying that OCBC move to support its staff during PSLE will "feed the fears of parents" – as if parents who take leave to help their children as irrationally fearful. She also said, "we are quite mistaken to behave as if PSLE is THE defining moment in a child’s development". It is easy for a parent to say this when his or her child is doing well and is self-motivated under the current system but lets spare some thought for the parents of children who are late bloomers, playful or haven't gotten round to focus on their academics. There is natural and understandable anxiety among these parents during the PSLE because our education system is a high stakes game, a few marks can decide if a child goes to "Normal Technical" stream where the chance of going to university drops to almost zero. Make no mistake it is a high stakes game: 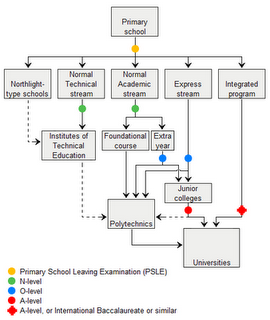 In my previous articles [Link, Link, Link], I wrote about the high stress that surrounds the PSLE exam. But I do not blame this on the parents, they are merely reacting to the system….and it is not "kiasuism", their fears are very real because the education system sorts children into various bins and with each bin is trapped in a certain expectation – this expectation shapes the achievements and the future of these children – Josephine Teo is wrong to say not the defining moment of a child's development – for many children it is, and the PSLE results is an important decider of their future.Putting so much at stake and so much pressure of 12 year old children is very unhealthy and harms their long term development. It causes our children to over-achieve in the beginning and underachieve in the longer run because it puts the emphasis the wrong areas – exams over love of learning, learning fast vs deep understanding of basic principles.To illustrate this lets look at some numbers. Suppose you take groups of students from various countries to test them. Lets take Israeli students, Hungarian students Austrian students, American students, Swedish students etc at age 14 , just after PSLE age and test them. Lets test them for math and instead of using all our  students lets just have Malay students whom the PAP (the former PM Lee) frequently claims are weak at maths. Someone has actually done such a test [Link]and these are the results:

Fast off the starting blocks our students are pressure cooked to the point they are way ahead of everyone else. But education is a long distance thing not a short sprint and the important outcomes are measured at the end of their education not at the initial part. Despite this spectacular achievement at PSLE only 6% of our Malays students make it to university and even fewer to Science and Engineering….we only educate 27% of all our students to university level below the average of OECD countries….and our own govt prefers give university scholarship to foreigners than educate our world beating 12 year olds who rank number 1 in the world for maths and science. This is the dismal outcome of our education system…..all the extreme stress at PSLE yields very poor results at the end – this is the "work so hard for very little results" outcomes for the system. Compare this with the Israeli system that doesn't result in high exams scores in standardized testing – the score far lower that all our racial groups – but at the end they generate more than enough people for their high tech industry not to mention the highest Nobel Prize winner per capita in the world.  Despite the frequent and sharp criticism of  the Israeli system due to low test scores, there is one thing they do right …and this secret  makes a gigantic difference at the end in terms of final outcomes. I tell you what it is at the end of this posting.Much of the student effort in our system which is now supplemented by a burgeoning tuition industry goes into trying to beat someone else at exams and achievement and ability is measured by exam scores….energy is spent getting yourself sorted to a better streams and schools. Such a system also does not distinguish us from the systems in China and India who can pressure cook more children and beat us by sheer numbers. After putting our children through this pressuring system, the PAP govt tells us that it has to import foreign 'talents' to fill our university and generate economic growth and vibrancy. We have to invest wisely on education but what are we getting in the end? We have to educate each child to their fullest potential over a period of around 16 years not sort them out after 6 years and 'pigeon-hole' them into compartments of decline expectations. Such a system is great for social hierarchy  with elite scholars occupying the apex in our society to provide top down directions….but where is the much needed creativity and innovation to propel us forward…in the end much social energy is lost in the sorting process as intense competition erodes the values of teamwork and cooperation that will elevate all in society not just the few to whom resources and opportunities has been disproportionately awarded So what is the secret in the Israeli education system that makes it different? They spend the first 5-8 years of education encouraging their students to ask questions rather than teach them to answer questions. We do the opposite – we measure the success and achievement of a student and teachers by their ability to answer exam questions. Primary school education is all about learning the facts and methods to answer questions…and year after year the questions are made harder and harder differentiate students in terms of ability to answer questions. We destroy the ability of our students to challenge ideas because the faster the learn and accept, the better they do at the exams. This is why the Israeli system that produces 14 year old who are 19 places behind us in standardized maths and science tests come roaring back to over take us later. We start fast …but they run further!…and it is the distance that matters.